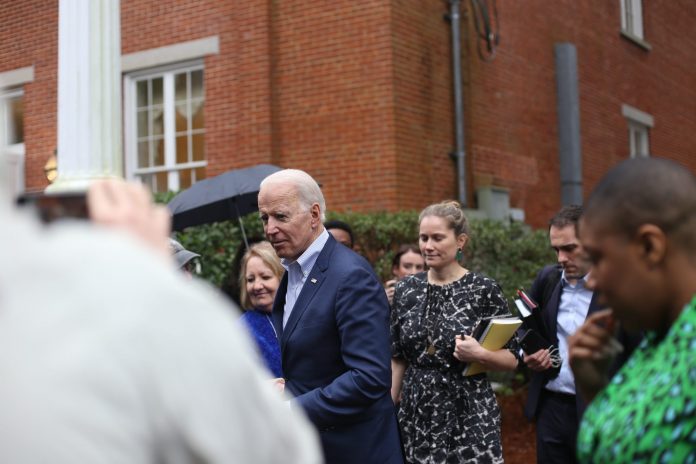 Feeding off the buzzing energy on the second floor of an event venue in this tiny town north of Charleston, the former vice president detailed his plans for health care, education and even for dredging the local port.

“He reminds me of a preacher, when he gets going and he leans back. And everyone says, ‘He said one more minute!'” Anderson said.

There are worse things, for a Democrat in the South, than getting compared to a preacher. Biden joked that Anderson, a local supporter, was trying to get him to shut up. But he relented. He asked for some questions he could answer yes or no.

Then a supporter asked if he was going to win.

“Yes!” Biden said, as the crowd erupted around him. “South Carolina is the trajectory to winning the Democratic nomination!”

The applause was the biggest of the day.

Biden had been considered the front-runner for the Democratic nomination before he stumbled to fourth place in the Iowa caucuses and fifth place in the New Hampshire primary earlier this month. After a second-place finish in the Nevada caucuses last week, though, he is experiencing surging momentum in this Southern state, which he has called his “firewall.”

Just a week ago, his lead over Sen. Bernie Sanders, I-Vt., in polling averages was as tight as 2%. Now the gap is in the double digits. And that difference was already widening when, on Wednesday, Biden secured the endorsement of South Carolina’s most powerful Democrat, Rep. James Clyburn, the House majority whip.

South Carolina’s Democratic presidential primary on Saturday will be the most important event of the Biden candidacy to date.

The Biden campaign, which spent the first months of the race coasting with front-runner status before taking a beating when voting started in the early states this month, has pegged its own viability to a strong showing among Democrats here. Biden himself predicted a win during the Democratic debate in Charleston this week.

Public polling and interviews with Democrats around the state suggest that Biden will do well. In particular, Biden is expected to outperform among black voters, especially those who are older or religious.

Black voters especially describe Biden as a known quantity, a candidate they have known and liked since his days with former President Barack Obama, or even earlier.

“The name that’s known in the community is Biden,” said the Rev. Andrew Adams, whose church is located in North Santee, an unincorporated territory in Georgetown County.

“I’ve talked to a lot of people about Bernie,” Adams said of Sanders, who has become the front-runner in the race for the nomination. “They don’t understand ‘Medicare for All,’ that situation. He’s not answering questions. He’s vague about how he’s going to make it happen. They are a little suspect about that, so I think that’s a turnoff.”

Despite the optimism surrounding Biden’s chances in South Carolina, there are questions about whether the campaign will gain enough momentum to power it through Super Tuesday, which takes place in just five days.

The available evidence suggests that Biden remains outgunned in advertising money and outmanned on the ground in the 14 states that will vote March 3, allocating a third of the nomination’s total delegates.

Of all the candidates on Tuesday’s debate stage, the Biden campaign was the last to devote serious advertising resources to the states. The campaign announced its first major Super Tuesday spending on Wednesday, saying it will spend six figures on ads primarily targeting black voters.

In comparison, Sanders has spent $13.5 million on airtime in the states, with seven figures each in just Texas, North Carolina and Colorado, according to Politico.

In addition to his heavy spending, Sanders is currently ahead in most of the Super Tuesday states for which enough polling data is available to say. If he decisively wins on Tuesday, he could gain an unstoppable lead.

Biden’s disadvantage carries over to staffing, where an NBC analysis of payroll data shows that Biden has a team about half the size of the ones campaigning for Bloomberg and Sanders. Warren’s campaign is the biggest in the field.

But those considerations haven’t seemed to dampen enthusiasm among voters in South Carolina, who are quick to note that only three states have voted so far, representing just a tiny fraction of the race’s delegates.

Tomi Greene, a 70-year-old black woman, said after an event in Charleston this week that she had cast her ballot for Biden early. The event, a civil rights breakfast hosted by activist the Rev. Al Sharpton, was attended by all the major candidates except Bloomberg.

Greene said the other candidates seemed to be there to debate each other but that Biden didn’t have to do so. She noted that Biden spent most of his time on stage praising Clyburn, who would endorse him that morning.

“He really doesn’t have to rally that hard, because the others are basically newcomers, you know what I mean?” Greene said.

‘This Is Not the Hunger Games’: National Testing Strategy Draws Concerns 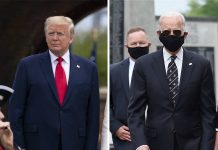 'Feels good to be out of my house': Biden lays Memorial Day wreath in Delaware 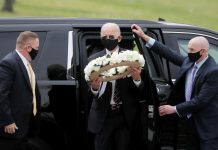 Out of the house: Biden makes first public campaign stop in weeks 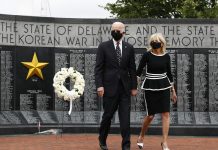 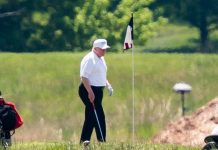 Corona rage is boiling over. To ease tensions, masks should be mandatory | Jessa Crispin

Extra $600 in jobless pay offers many a lifeline – but will it be renewed? 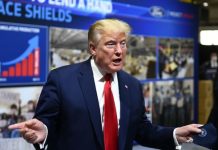 Trump Hasn't Worn A Mask Publicly. Here's What Might Convince Him To

Trump news – live: President told to ‘just stop’ offensive tweets by own side after lashing out with insults and conspiracy theories as US...