Ellie Day, the wife of Australian Golfer Jason Day, who was involved in a scary sideline collision with LeBron James during an NBA game in Cleveland. James, who is six foot six inches tall and weighs 266 pounds, tried to get a loose ball back in play, crashed into her seat and both of them sprawling backwards to the floor. (NBA Star LeBron James in Scary Sideline Collision With Golfer Jason Day’s Wife)

Ellie was taken to hospital and was monitored for 24 hours. She was out of danger and later on she took to twitter to state that she is safe but also defended her husband who was the subject of intense criticism in the social media.

Tweeting from her handle @ellielaneday, she said that her body felt like it was hit by a truck. She wrote, “Being tackled by that large man, I would compare to a minor car accident. My head and neck hit pretty hard and that was the scary part.”

She also lashed out at people who criticised her husband Jason for failing to protect her. “For all the crazies who think that Jason should have protected me, if he had time to react, he would have done it. Also, I would not have liked both dudes landing on me. LeBron is huge and had such momentum he could not be stopped.”

The game was halted for several minutes as medical personnel attended to Day, with James and his Cavaliers teammates looking on. Following the collison, she was hospitalized overnight for observation. 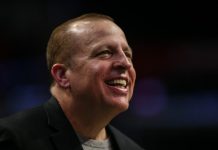 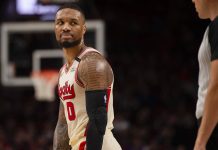 The ‘Inside Stuff’: How Ahmad Rashad, ‘Saved by the Bell’ and NBC changed the NBA

Kareem, Klay and Wilt: Ranking the NBA’s most unbreakable records