Jan 6 hearings: What have we learned from the committee so far? 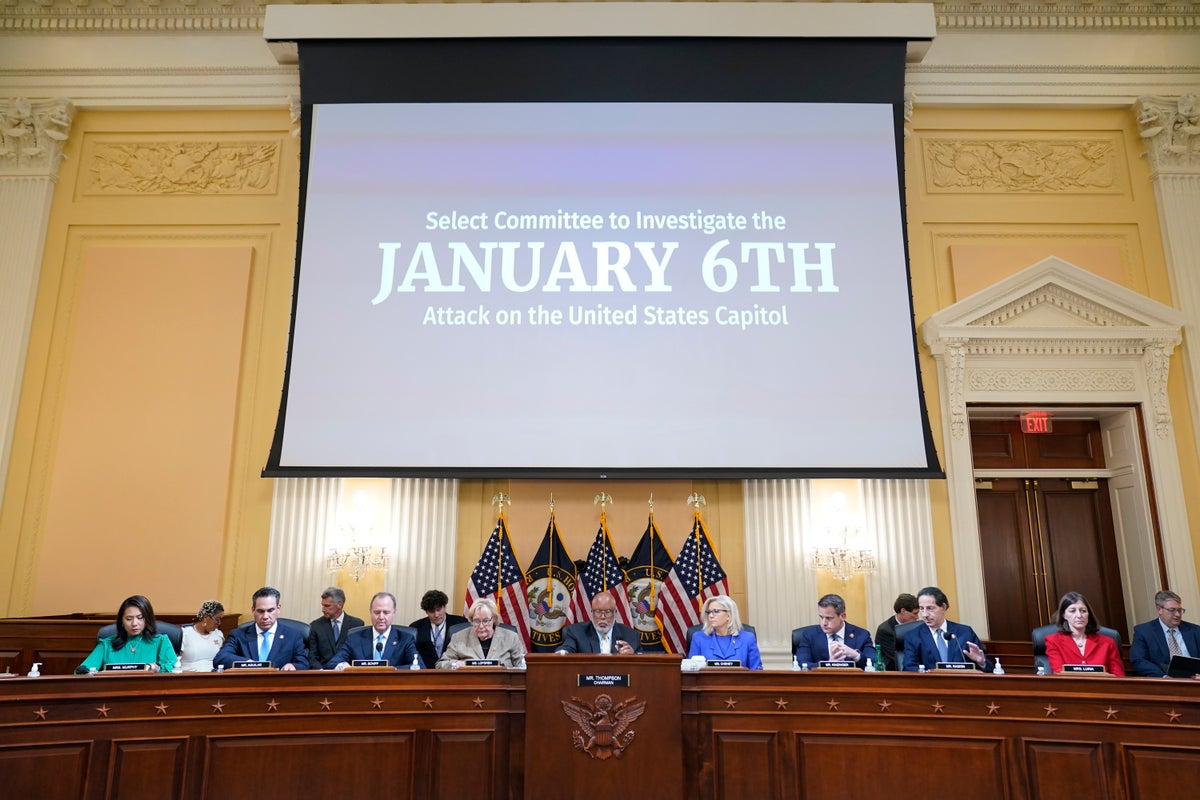 After nearly a year-long investigation, the House of Representatives select committee charged with investigating the circumstances that led to the worst attack on the US Capitol since 1814 is presenting its preliminary findings to the public.

The panel of seven Democrats, along with Republican representatives Liz Cheney and Adam Kinzinger, began revealing what it has learned in a prime-time, televised hearing on 9 June.

On Monday 13 June, the select committee presented videotaped testimony from Bill Stepien, former president Donald Trump’s campaign manager, as well as an ex-Fox News editor, a top GOP election lawyer, and two Republican former government officials who had found themselves on the receiving end of Mr Trump’s wrath after not concurring with his lies regarding the conduct of the 2020 election.

The presentation was the first follow-up to the panel’s prime-time opening hearing, during which viewers were shown unseen footage from police body-worn cameras, Capitol security cameras, and footage shot by a British documentarian, Nick Quested, who spent the days leading up to the attack following members of the pro-Trump extremist gang known as the Proud Boys.

The third hearing on Thursday 16 June focused on Mr Trump’s efforts to put pressure on his vice president Mike Pence after all 50 states had certified Democrat Joe Biden’s election win and courts across the country had rejected his campaign’s attempts to legally challenge the results.

Greg Jacob, a counsel to Mr Pence, said the vice president was resolute from the beginning that he would not carry out the plan, despite threats being made against his life by the rioters. “Our review of text, history — and frankly, just common sense — all confirm the vice president’s first instinct on that point, there is no justifiable basis to conclude that the vice president has that kind of authority,” Mr Jacob told the committee in live testimony.

On Tuesday 21 June, the select committee presented evidence showing Mr Trump’s involvement in plans which resulted in fake electoral college certificates being submitted to the National Archives. The panel also heard testimony from election workers and GOP officials who were targeted by Mr Trump after his loss to Mr Biden.

Here are some of the biggest revelations from the first four hearings.

Not only did he participate in several phone calls between the then-president and investigators with Secretary of State Brad Raffensperger’s office, but he went so far as to visit a site where votes were being counted.

During the 21 June hearing on the Trump pressure campaign, California Representative Adam Schiff said the select committee had obtained text messages which showed the ex-North Carolina congressman was willing to go even further to help Mr Trump.

“[T]he Select Committee has received text messages indicating that Mark Meadows wanted to send some of the investigators in her office, in the words of one White House aide, ‘a s***load of POTUS stuff,’ including coins, actual autographed MAGA hats, etc”, Mr Schiff said. He added that White House aides “intervened to make sure that didn’t happen”.

The “POTUS stuff” described in the text messages included “challenge coins” and other souvenirs bearing the seal of the President of the United States, as well as autographed Trump “Make America Great Again” hats. Legal experts say Mr Meadows could have faced federal bribery charges if he’d succeeded in his plan.

Mr Stepien, whose planned in-person appearance at the panel’s second hearing was nixed after his wife went into labour, was one of a number of Trump aides who testified that they’d told the then-president not to declare victory on election night because many swing states were still in the process of counting a record number of postal ballots.

Another Trump campaign aide, Jason Miller, also testified that he had told Mr Trump it was too early to say whether he had succeeded in his re-election bid for him to claim to have won on election night.

Yet Mr Trump decided to do so anyway and told aides that he would go “in a different direction” than the one they advised.

Ms Cheney, the select committee’s vice-chair, raised eyebrows last Monday when she said the panel would present testimony that Mr Trump “rejected the advice of his campaign experts on election night, and instead followed the course recommended by an apparently inebriated Rudy Giuliani to just claim he won”.

In his videotaped deposition, Mr Miller said Mr Giuliani was “definitely intoxicated” when he spoke to Mr Trump late on election night and said it was the ex-New York City mayor’s idea for Mr Trump to simply declare himself the winner of the 2020 election.

“I believe it was Mayor Giuliani to go and declare victory and to say we won it outright. Mayor Giuliani was saying we won it, they’re stealing it from us… we need to go say that we won,” he said.

Mr Giuliani has denied that he was drunk on election night and claimed that he only sipped his preferred beverage of diet Pepsi that evening.

The select committee had already revealed video of former attorney general Bill Barr calling the claims of election fraud promoted by Mr Trump and his allies “bulls***” during Thursday evening’s opening session, but Mr Barr went even further in excerpts played on Monday, calling them “idiotic” and “complete nonsense”.

Mr Barr also told the select committee that he felt “demoralised” by the former president’s insistence on claiming his loss had come about due to fraud because he thought Mr Trump had “become detached from reality if he really believed this stuff”. He added that Mr Trump “never” showed “an indication of interest in what the actual facts [were]”.

Eric Herschmann, the deputy White House counsel who Mr Trump brought on after using him as a defence attorney during his first impeachment trial, also testified about having dismissed the claims Mr Giuliani and another attorney, Sidney Powell, began promoting after it became clear that Mr Trump had lost the election.

“What they were proposing I thought was nuts. The theory was also completely nuts, right? A combination of Italians, Germans, different things that were floating around as to who was involved,” he said.

After it became clear that he had lost the 2020 election, Mr Trump’s presidential campaign stopped asking donors for money.

But the fundraising emails from Mr Trump and his family members continued to pound the inboxes of anyone who’d ever attended a Trump rally or provided their email address to the campaign.

Shortly after it became clear he would not be declared the winner of the 2020 election, Mr Trump established a Leadership Political Action Committee known as “Save America”. This new entity could not be used to fund a presidential campaign, but it could be used to direct donations to Mr Trump, his family and his eponymous businesses.

The emails sent in the days between the election and the riot implored Mr Trump’s supporters to donate to an “election integrity fund” that would be purportedly used to bankroll the myriad legal challenges his campaign was filing in hopes of reversing his loss.

According to Federal Election Commission data, the fundraising push was quite lucrative, bringing in a quarter-billion dollars over that two-month period.

But every single person who donated in hopes of funding challenges to the election was duped because no such fund existed.

One select committee member, California representative Zoe Lofgren, put it this way: “So not only was there the big lie, there was the big rip-off”.

Members of Congress asked Mr Trump for pardons after the riot

Ms Cheney offered up a key bit of information during her opening statement at the first prime-time hearing.

The Wyoming Republican told the 20 million Americans watching on various television networks that one GOP congressman, Pennsylvania representative Scott Perry, had reached out to the White House in the days following the Capitol attack to push Mr Trump to issue him a pre-emptive presidential pardon. Mr Perry has denied that he asked the former president for a pardon.

Such an action would have absolved him of responsibility for any crime he might be charged with as a result of his role in trying to get Mr Trump to replace his Justice Department leadership with people more amenable to his lies.

But Ms Cheney went even further in her next breath, telling the audience that “multiple other Republican congressmen” had also solicited pardons from Mr Trump in the waning days of his presidency.

President knew plot to overturn the election was illegal

The third public hearing into the Capitol riot heard evidence that Mr Trump was repeatedly told his plan to overturn the election result was illegal and violated the Electoral Count Act of 1887, even by the lawyer urging him to do so.

Attorney John Eastman also allegedly asked for a pardon after pushing a scheme to pressure Mr Pence into unilaterally rejecting electoral votes from swing states won by Mr Biden and was said to have dismissed the prospect of political violence ensuing as necessary historically “to protect the republic”.

The hearing also heard that Trump supporters were infuriated by the vice president’s refusal to go along with the plan and that during the riot – when many were chanting “Hang Mike Pence” – some came within 40 feet of him.

It also emerged that an informant had told the FBI that members of the aforementioned Proud Boys were willing to kill the vice president and that Mr Trump’s own aides considered a tweet issued by the president that day attacking his deputy as amounting to “pouring gasoline on the fire”.

Shocking video shown at the hearing showed Trump supporters marching on the Capitol, with one saying: “You f***ing politicians are going to get f***ing dragged through the streets.”

Retired Fourth Circuit judge J Michael Luttig meawhile told the panel that “Donald Trump and his allies and supporters are a clear and present danger to American democracy” to this day and are likely to pose an ongoing threat. 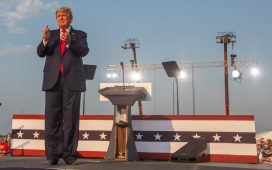 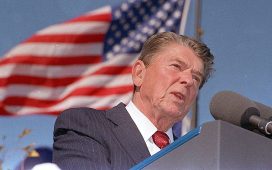 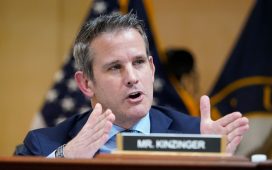 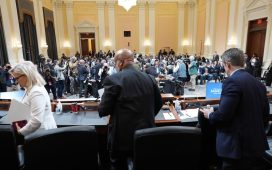 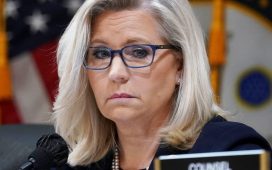 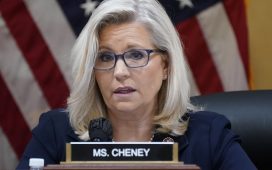