Martha Crawford had her first Trump dream in 2015. In it, a friend who was going out of town on business asked her to check on his apartment while he was away. The address he gave led to an apartment on the top floor of a six-story building where, on the sofa, illuminated by the glare of an enormous television, she said, “Donald Trump, in a large adult diaper, sat sleeping with his chin on his chest.” She watched Trump sleeping for a while, then filled a large metal dog bowl with kibble and slipped it across the table. When Trump awoke, he began gobbling, loudly, with his mouth open. Crawford was alternately “filled with disgust and then flooded with pity.” She ended up buying him a flip phone, “for emergencies only.” This was to be the first in her collection of Trump dreams.

Trump’s Presidency was always surreal, even before his radical incompetence confronted a pandemic. Crawford has been a clinical social worker and a psychotherapist in New York for twenty-five years. Starting in 2016, her clients “were reporting dreams with Donald Trump in a way that’s not common for other Presidencies,” she said. “He was a looming figure in people’s psyches.” She realized that it was in dreams that Americans were making sense of Trump. “In the year after the election,” Crawford said, “I was on chemotherapy for cancer and I couldn’t do much. I couldn’t go protest in the streets. I couldn’t go volunteer. I needed to contribute in some way.” She took inspiration from Charlotte Beradt’s “The Third Reich of Dreams,” a portfolio of dream descriptions from German men and women that were collected between when Hitler became chancellor, in 1933, and the outbreak of the Second World War. In the aftermath of Trump’s election, Crawford started a blog on which people could post dreams anonymously. Then she started gathering dreams from social media. Soon she had three thousand.

There was a dream that Trump had taken credit for ending the Boer War. There was a dream that he had changed the motto on the currency to “Everyone Can Dream.” There were dreams of his undoing, dreams of his Presidency being erased. There were a series of dreams about Trump’s hair; a chestnut mare at a rodeo ripping a wig off Trump’s head and ending his Presidency in glamorous humiliation. One person dreamed of Trump masturbating; another of Trump wearing an anti-masturbation T-shirt. Often the Trump dreams involved some kind of compassion: “Dreamt Donald Trump sat all alone in a playground, because no one wanted to play with him. Offered him a cup of tea.” There were many dreams about food: dreams of Trump at McDonalds, or dreams where he makes olives illegal because he thinks they are “weird.”

Crawford began sorting the three thousand dreams into categories. There were lots of dreams in which people’s mothers start dating Trump—nearly twenty out of the total that were collected. Another whole category of dreams featured Trump as an alien, an invader from outer space. There was a series of dreams of cognitive decline, dreams of demented tantrums, dreams of Trump begging to be moved into a memory-care unit. Another large category contained dreams of Trump infiltrating private places: “He walked into my house without knocking and took a giant shit in my toilet and didn’t even flush.” He infiltrated institutions as well. “A whole section is people going back to school and Donald Trump is their teacher,” Crawford said. She collected fifty variations on the theme. Another group of dreamers saw Trump in the place of the men who sexually abused them. “People who’ve experienced sexual abuse by teachers or by parents or by authorities are activated by that reality,” Crawford said.

There were prophetic dreams—“Donald Trump is descending from Heaven on a golden staircase and will save the world,” as Crawford put it. Others are paranoid, prophecies of Trump as a Christlike or Antichrist-like figure. There were seventy-five separate dreams of nuclear war, which spiked around the time of Trump’s diplomatic mission to North Korea. His power could be religious. “I had a dream that my old pastor said from the pulpit, ‘If you didn’t vote for Trump, you don’t understand the Gospel,’ except the pastor was Trump.” There seemed to be no limit to the spaces Trump could infiltrate. One poor man had a nightmare of Trump and Vice-President Mike Pence interrupting a Philadelphia Eagles game to dispute the rules. And there were dreams of situations much like the one America finds itself in now: “Had a dream we were in an exclusive box at an event with the Trump family,” one dreamer wrote. “An emergency siren went off, and we were all running to safety. Naturally the Trump family took a different elevator that would lead them to safety, and the rest of us to panic.” Trump’s contamination of American consciousness began long ago.

The source of these dreams of infiltration are clear enough—Trump is unprecedented in his ability to dominate the public’s attention. More puzzling are what Crawford calls the dreams of “unconscious collaboration.” Crawford’s own dream belongs in that category. “The first phenomenon I became aware of was people having positive dreams about Donald Trump,” Crawford said. “Either empathic dreams or feeling sorry for him or pitying him or assisting him in some way or being a caretaker of his or being attracted to him—and then waking up and reporting these dreams as being distressing to them.” A man struggles to put up a Christmas tree and Trump comes in and says, “Biggest Christmas tree ever!” Americans have been having dreams that Trump helps them, that he supports them, that they help him, that they support him—but, on waking, some of the dreamers take these positive dreams as refreshing encouragement while others consider them nightmares. For Crawford, these dreams serve a social function, one that’s also reflected in “The Third Reich of Dreams”: the unconscious mind attempting to pull the dreamer back into alignment with an absurd and despicable world.

These dreams of unconscious collaboration, of surreptitious compassion, reveal the depth of Trump’s social power. He is a voice telling certain Americans that their darkest desires are normal, acceptable. “If you think about dreams as the receptacle of everything we repress, of everything we have a moral problem about, anything that you don’t believe you should think or feel sinks down into the unconscious. Things that we are in conflict about emerge in dream life,” Crawford said. Carl Jung called this the “shadow.” It is a fundamental source of Trump’s appeal. What he tells Americans is that they’re O.K.—it’s O.K. to want what they want, to act the way they have always wanted to act.

In “The Third Reich of Dreams,” the infiltration of consciousness often manifests itself as a fear of exposure. Some Germans dreamed of the walls of their houses disappearing, or the furniture turning them in to the authorities. One of the most horrifying dreams was from a man who told Beradt that he could only dream of rectangles, triangles, and octagons: “You see, it was forbidden to dream.” In Crawford’s collection of dreams, there is no such impetus to invisibility, rather the opposite. “Everybody is screaming,” she said. The Trump dreams are not dreams of totalitarianism but of side-taking. “We’re still fighting a civil war. That’s what these dreams show,” Crawford said. “We’re splitting ourselves personally in half, and we’re splitting ourselves collectively in half.” American polarization is on the level of the psyche. 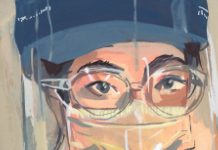 What to Stream: Billy Woodberry’s Documentary About the Poet Bob Kaufman 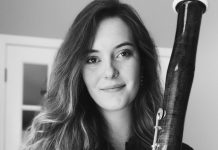 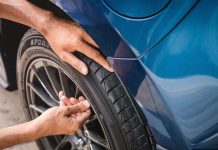 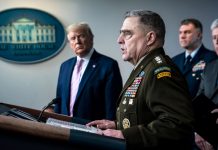 Will the Military Allow President Trump to Use It for Political Advantage? 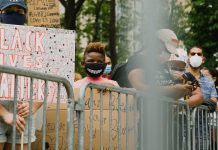 Scenes from the George Floyd Memorial in Brooklyn 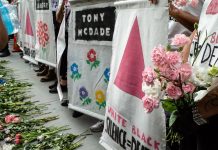 On "We’re Here," Drag — and Allyship — Are More Than a Performance 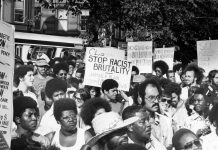 Op-Ed: Police Brutality Aimed at Black People Is as American as Apple Pie