‘If The Horses Aren’t Trying To Kill Me, It’s No Fun’: Tending To Stallions Is Zurick’s Extreme Sport

Christina Zurick doesn’t consider herself a risk-taker in the course of her everyday life.

She doesn’t climb mountains or ski down them, she doesn’t ride bulls or surf giant waves, and if a plane leaves the runway, she doesn’t intend to exit it via parachute.

She’s got a couple German Shepherds. That’s about as dangerous as it gets.

Close your eyes and listen to Zurick discuss what she likes about her job as a stallion groom at Hill ‘n’ Dale Farms, though, and it might sound like any number of extreme sports athletes explaining what compels them to put their bodies on the line as a vocation.

“I like that element of danger, which sounds crazy, but if the horses aren’t trying to kill me, it’s no fun,” Zurick said. “A lot of the guys think it’s funny and say, ‘Oh, this one’s a problem. Hand him off to Christina.’”

Earning that status as a Kentucky stud farm’s first-call for difficult stallions is a badge of honor that many take years to earn, if they ever do, and as a 25-year-old woman whose eyes barely reach the withers of the horses she cares for, Zurick does not fit the profile of what’s expected in that position.

A tired adage in the Thoroughbred sport is that horses don’t know who they’re sired by or what their odds are on the tote board, but they also don’t know anything about the equally tired unwritten rules guiding who is “supposed” to take care of them.

Though she shares duties on several stallions on the Hill ‘n’ Dale roster, Zurick’s two primary charges are the farm’s two most proven stallions, and the ones with the highest stud fees: Hall of Famers Curlin and Ghostzapper. Taking care of each one was a unique fulfillment of a childhood dream.

In 2007, a pre-teen Zurick in Minnesota was firmly on “Team Curlin” among that season’s deep class of 3-year-olds, and she made a point to learn the colt’s every detail. A call in to a local sports talk radio program to extoll the virtues of the future Horse of the Year led to her becoming a regular guest on the program to discuss racing topics.

That love of the champion chestnut stayed with her through to her employment at Hill ‘n’ Dale, where she was initially assigned Curlin as a six-month fill-in for his usual groom, who was out with a broken foot. She was placed on him full-time when Hill ‘n’ Dale moved its operations to Xalapa Farm in Paris, Ky., last year.

“When it first happened, I knew it was only temporary, so I thought, ‘Okay, well, at least I got to take care of him for a little bit of time,’” Zurick said. “Then, I guess I did a good enough job, because he assigned him to me permanently, and when that happened, I immediately texted my parents. I don’t drink, so I told them, ‘Guys, I’m having a pint of ice cream tonight in celebration.’ I messaged pretty much everyone I knew. I can’t believe it to this day. I love that horse so much.

“I told my parents, if I never did anything else in racing, at least I took care of him,” she continued. “That was my main goal in life, and I achieved it.”

Ghostzapper was another horse whose career Zurick knew by heart as a child, but for an entirely different reason, owing to the “Breeders’ Cup World Thoroughbred Championships” video game released in 2005.

“I used to play that all the time,” she said. “They had Ghostzapper’s Breeders’ Cup Classic replay on there, and I could recite Tom Durkin’s call word for word. If you would have told me when I was 12 years old playing that Xbox game that one day, I would take care of that horse and take care of Curlin, I probably would have fainted and never woke up.”

Considering the lofty goals she has achieved, it seems impossible to think Zurick was considering getting out of working with horses entirely in the middle of the last decade, but a particularly hard run of luck working for farms in the Midwest had left her exploring her options.

Meanwhile in Kentucky, fellow Minnesotan Annette Lokkesmoe was working at Margaux Farm through the Kentucky Equine Management Internship, and she’d heard about her friend’s troubles back home. It didn’t take long for a course of action to be put in place.

She called me and found out what happened, and she said, ‘I’m coming home for Christmas, picking you up, and you’re coming back to Kentucky with me to work at Margaux,’” Zurick said. “She said,’ if you talk to the farm manager, I guarantee you you’ll get a job.’”

Lokkesmoe was correct in her assessment, and the two Minnesotans shared a house at Margaux Farm, where Zurick worked as a groom.

Zurick was placed in a barn with a large group of 2-year-old colts, and that time spent with the youngsters was what convinced her that she wanted to work with stallions.

After nine months at Margaux Farm, she started handed out resumes at stud farms around Kentucky, but had the door closed on her for a lack of breeding shed experience, and, bluntly, because she wasn’t a guy. It doesn’t take an entire hand, or even most of the hand, to count out the female stallion grooms at major Kentucky farms.

Zurick took a job with Stonestreet Farm’s broodmare division with the hopes of networking her way to a stallion farm, and she was successful in May 2019 when she joined the Hill ‘n’ Dale team. Now having worked with both stallions and mares, Zurick said she always knew the extremes that working with a stallion can bring were what she wanted all along.

“It’s very different with a stallion versus a mare,” she said. “Mares are a little bit tougher at some points, but then they’ll have a really sweet side. With the stallions, you’re constantly in danger. There are very few that are really chill and aren’t ever going to hurt you.

“I always wanted to do the breeding shed, because I get that adrenaline rush from that,” she continued. “If it’s not going to maybe kill me or hurt me, I don’t want to do it.”

The list of women who are chased out of male-dominated fields in the Thoroughbred industry is frustratingly long, and Zurick had expected that kind of challenge as the only female in her new position at Hill ‘n’ Dale. However, she said her experience has been the exact opposite, helped greatly by the unflinching support of the farm’s stallion manager Larry Walton.

“Larry lets me jump stallions in the breeding shed, and that never happens when you’re a girl,” Zurick said. “It’s all because Larry believes in me. Last year was the first time that I did it. He radioed down to the barn, ‘Hey Christina, can you bring Mucho Macho Man?’ I said, ‘Are you sure I can do that?’ and he said ‘You’ve got it. What are you being a chicken for? Get him over here.’ It’s just so crazy to have a boss that believes in you like that, because I’d never had it before. I’ve learned so much from him and owe so much to him.”

Of course, even with Walton ensuring that the working environment is as harassment-free as possible for a female stallion groom, Zurick still had to prove she belonged on the team based on her own body of work.

In handling stallions Zurick said she has two basic tenets.

“The main thing with stallions is, you can’t be afraid,” she continued. “They second you are afraid, they know it and they’ll exploit every angle that they can on you. You have to go every day with this thought that I might get hurt today, and it is what it is. That’s why we have worker’s comp.”

Zurick described the farm’s star stallions Curlin and Ghostzapper as two horses with quite similar personalities, in that they both know their importance and expect those around them to know it, too. She described Curlin as “a handful,” but one with an outstanding mind. As the horse she obsessed over as a child, Curlin lived up to the hype.

“He’s a cool dude,” Zurick said. “If he likes you, he’s really sweet. He’ll still try to bite you and he still messes with me, but it’s not to the point where he’s legitimately going to hurt me. He’s legitimately the smartest horse I’ve ever worked with in my life. He’s very communicative about what he wants, what he needs, when he wants it.

“We had somebody new filling water buckets one day and they forgot his bucket,” she continued. “He saw I was walking down the shedrow, went over to his water bucket, banged it against the wall, walked back to the door, nickered at me, and then when I wasn’t getting the message, went back over to the water bucket and banged it again and looked at me like, ‘Excuse me, my water is empty.’”

Ghostzapper, on the other hand, requires a slightly different approach.

“He’s a grumpy old man,” she said. “He can be sweet, but he’s very much like your typical grumpy old man. He likes to be left alone for the most part. He does like to be loved on sometimes, but it has to be on his terms.”

Though she might not consider herself a risk-taker outside of her inherently risk-laden profession, there is always a stake on the line when you bet on yourself, and Zurick had to double down in a field that was not particularly looking for someone like her. When that bet hit, it paid off in a way her younger self wouldn’t have dared imagined – even if it meant a broken finger or two along the way. The house always takes its share.

For other young women watching their favorite horses on a simulcast feed in flyover country, or anywhere else on the map, Zurick said her spot next to two Hall of Famers shows that the table is open for others that want to bet on themselves to get into the stallion barn.

“For any girl that really wants to do stallions, you just have to keep going and keep trying, and eventually someone will give you a chance and you’ll get lucky,” she said. “I know it’s hard, and sometimes you want to give up. For every person that says no, there might be at least one that might say yes, and you have to keep going until you find it. I know it stinks, and you have to push through a lot of bullcrap to get there, but at the end of it, I promise you it’s worth it. I wouldn’t change a single thing of how my life has gone so far for where I ended up.”

Maxfield Goes Out In Style With Resume-Padding Clark Triumph 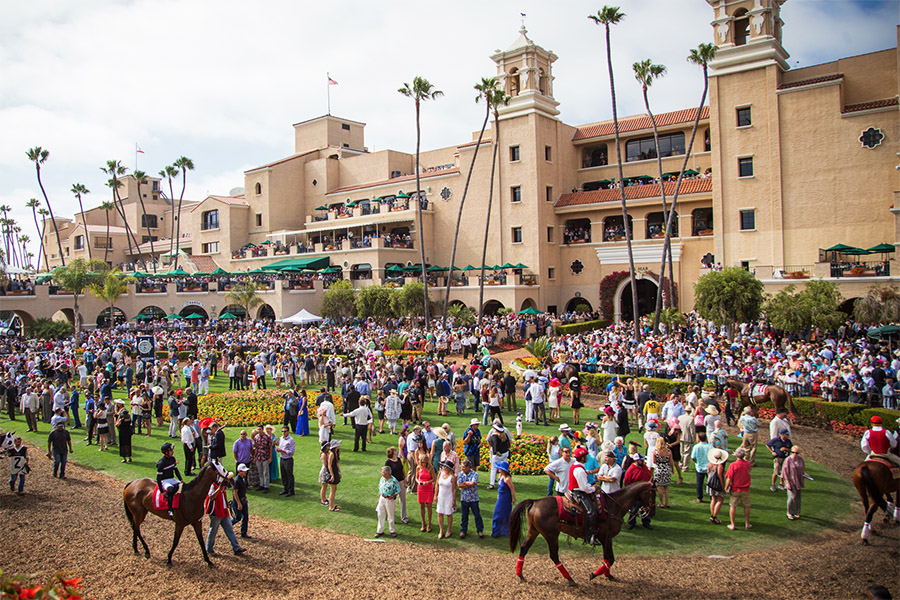