Hollie Doyle admits she made a mistake with her whip use when riding Echo Brava in a Jan. 30 race at Kempton, leading to a six-day ban from the stewards. However, Doyle told the Racing Post that she appealed that ruling due to the way she was treated by the stewards during their inquiry.

“I’m fairly thick-skinned but I felt pretty intimidated in the inquiry,” Doyle told racingpost.com. “I was repeatedly interrupted and spoken over. I accepted I had hit the horse short unintentionally but I couldn’t get a word in.

“The tone in which I was spoken to backed me into a corner and left me no way to describe the incident. That’s one of the reasons I opted to appeal. I would hate for a younger jockey to feel the way I did.”

Doyle’s appeal was denied on the basis that there were no extenuating circumstances that could have justified her penalty being reduced.

“We are grateful to Hollie for raising the concerns she had following her experience at Kempton,” said a spokesperson for the British Horseracing Authority. Over the past two years the BHA has developed and facilitated training for all stewards across the country on process and procedure, and while the pandemic has had an impact on that, further professional development in this regard is ongoing and planned in 2021.”

Paul Struthers, chief executive of the Professional Jockeys Association, has called for audio of Doyle’s inquiry to be made public.

Fashionably Fast Digs In For Game Victory In Tiznow Stakes

Breeders’ Cup Presents Connections: From Mishriff To Enable, Every Day Is The ‘Olympics’ For Traveling Tony Proctor 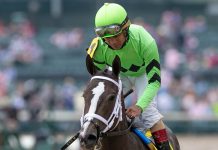