I have four dogs, seven cats and three horses – and I’ve never been more content

Although I was late coming to the party in terms of pets, thanks to a career that afforded me neither the time nor the freedom to keep them, I have since made up for it and now count four dogs and three horses among my most loyal companions, as well as seven stray cats that have graciously chosen me to feed them.

As a result, over the past 16 years, my home has been rough-housed by a pack of assorted rescue dogs that have peed on, ripped up and digested much of my furniture. The horses have gifted me a couple of broken fingers and left me teetering on the edge of bankruptcy, and the cats, well, they don’t even pretend to show gratitude. And yet, I can’t remember being more content.

I say content because I was happy in my previous life with humans. At times, I have been ecstatically happy. But I never felt that wonderful calm and sense of grounding that comes with being content, not until I gave my time to animals.

It may come as no surprise, given my life of dust and dog hair, that I have lived alone for the past 10 years. Even so, not once have I felt lonely. Animals have also made me unexpectedly healthy. I stopped binge-drinking when I got my horses because I couldn’t ride with a hangover. I do gym stuff and ballet in order to become a better equestrian. I stopped smoking when it crossed my mind that I might die before my pets. And I adopted a plant-based diet because I didn’t want to eat the very things that had given my life purpose. My ability to self-regulate also escalated sharply and, according to Sarah Urwin, a counsellor specialising in animal-assisted therapy, that’s one of the key takeaways from being around dogs and horses, and it’s all to do with the autonomic nervous system.

In short, people need to be able to self-regulate, to understand and manage strong emotions such as frustration, excitement, anger and embarrassment. If we are lucky, we are helped in this endeavour via co-regulation, whereby our autonomic nervous system sensitively interacts with another’s in a way that facilitates greater emotional balance and physical health. For some of us, that comes easier with animals.

“If we can’t attach to our fellow humans easily, and if we don’t find them helpful for regulation, but we can turn to an animal, attach to that animal and the animal helps us to self-regulate through co-regulation, what’s not to like?” asks Urwin.

While some might contend that self-regulation comes with maturity, I have seen plenty of adults act irrationally, and sometimes with unnecessary violence, when frustrated. I, too, have been known to scream in fits of rage, but not so much these days.

In the great scheme of things, nothing is more important to me than security, health and happiness. The rest are merely “things”, the baubles of life. In this respect, the horses especially have broadened my horizons – it’s not always about me.

“Relationships with animals teach us about trust and they teach us outward focus,” explains Urwin. “This is because animals live in the here and now. They don’t live in yesterday and they don’t live in tomorrow, and they help us to do the same, which is why it’s more comfortable to be with them. It’s what the Buddhists say, living in the moment is where you’ll find contentment.”

As well as transforming me into a zen master of self-regulation, which might also be the result of spending more time away from people, I find myself wrapped in a blanket of familiarity in the company of animals, something that might be explained by a primordial need – along with not owning a telly.

In the 1980s, the American biologist Edward O Wilson in his work Biophilia proposed that the tendency of humans to affiliate with nature and other life forms has, in part, a genetic basis. He found evidence for this from studies of biophobia (the fear of nature). When humans were constantly vulnerable to predators, poisonous plants and animals, fear was a fundamental connection with nature that enabled survival and, as a result, humans needed to maintain a close relationship with their environment. It is thought that our increased dependence on technology has weakened that human drive to connect with nature, leading to less appreciation of the diversity of life forms.

“Part of the attraction of being around animals is biological,” agrees Urwin. “We’re kind of pre-programmed for it, biologically. It’s in our DNA: an affinity for and an innate need to attend to.”

While heeding the call of our ancestors might be one reason for gravitating towards animals, there is another theme prevalent in many of my conversations with like-minded souls – people simply get on our nerves. One of my friends – because I do have them – unashamedly admits she is Team Animal, citing a growing intolerance of “bollocks” that she partly blames on the menopause.

Another friend recently told me that when her husband refused to have sex unless she got rid of her seven cats, she knew her marriage was over. “When he tried to shag my friend, we kind of worked through it,” she laughed. She was only half-joking.

Similarly – and though my closest friends and family continue to add their own individual colour to my life – as I get older, I find myself less willing to navigate the vagaries, politics and mood swings of people I’m not close to. Increasingly, I find people tiresome.

As another friend told me, “Animals don’t disappoint you in the way people do. There’s no judgment, no hidden agenda, no sense of expectation. They give you unconditional loyalty; friendship in its most pure form.”

There is perhaps no greater illustration of the non-judgmental quality of animal companionship than in programmes established to rehabilitate prisoners. In the US, the Tails programme, which stands for Teaching Animals and Inmates Life Skills, focuses on pairing at-risk dogs with institutionalised men. Jennifer Wesely, a professor of criminology at the University of North Florida, said the positive behavioural effects of such initiatives include enhanced empathy, emotional intelligence, communication, patience, self-control and trust.

A similar programme rolled out in UK prisons last summer saw prison officers take their own dogs to work in a bid to defuse tensions and help inmates during the pandemic when visits were temporarily suspended.

“Animals can’t lie,” says Urwin. “They can’t separate how they feel from how they act. So, in terms of getting feedback, what people get from animals is genuine. They get unconditional positive regard from animals. They get congruence from animals and, very often, they get empathy.

“It’s quite a big deal, this idea of acceptance, especially among vulnerable groups who aren’t accepted easily by mainstream society or who have suffered individual trauma and therefore have learned not to trust people.

“Animals don’t project through verbal communication. They don’t try and interpret what you’re saying. They take on board what’s actually happening. So, again, there’s a load of reasons psychologically, why someone might trust an animal in a way that they perhaps might not trust a human being,” she says.

There are physiological benefits, too. Countless studies over the years have shown that being in the presence of animals can lower blood pressure and heart rates, resulting in far less cortisol and adrenaline in our systems, but modern research has also discovered a link with oxytocin levels.

“Oxytocin is the bonding attachment chemical, and that goes up when we attach to animals,” explains Urwin. “At the same time, serotonin and dopamine levels have also been shown to increase, which are the feel-good chemicals. And the most recent research centres around prolactin and what they call phenylalanine, which is an anti-inflammatory.

“There is also the electromagnetic field. So, my standing heart rate is between 50 and 60, while my horses have an average standing heart rate of 38 beats per minute; much lower than mine. So, the minute I come into their field, it is quite likely that their presence, if we are all calm, will bring my heart rate down as part of the mirroring process.

“Some people have that same kind of magic about them and, in a way, it is magic, but there are things happening in the body that make that magic happen.”

As I get older, and accept that my life is unlikely to swerve back to the conventional path of marriage and 2.4 children, I have come to understand that the secret of happiness is contentment, and whether it’s wrapped up in biology, psychology, chemistry or magic, the reason is down to animals. I owe them much and I only hope they have found a similar contentment with me.

Untethered by Andrea Busfield is published by Armida Books at £15 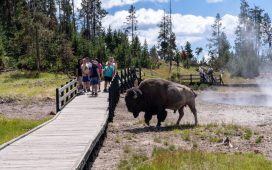 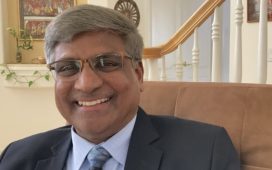 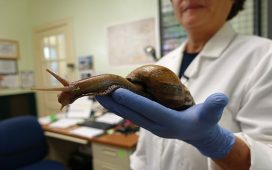