‘I am the universe, looking out from my tower’: Marina Abramović narrates latest album by New York pop music duo Sound of Ceres

Much like the universe, Marina Abramović’s artistic practice is ever-expanding. Rooted in durational performance, it has over the years grown to incorporate photography, video, theatre, opera, pedagogy, virtual reality and, most recently, NFTs (non-fungible tokens). Abramović’s latest lateral move is into the realm of pop music: she can now be heard giving voice to the universe on Emerald Sea, a new concept album by New York-based dream pop duo Sound of Ceres, which was released on 17 June.

In lush, symphonic sounds the album tells the three-act love story of the universe (voiced in interludes by Abramović) and Venus, the Roman goddess of love, whose perspective is articulated by the singer K Hover, one half (with Ryan Hover) of Sound of Ceres. Rich in synths, harps and angelic choirs, the record effectively conjures the glimmering environs of the gods, while Abramović’s distinctive voice grounds the narrative.

In her spoken passages, Abramović recounts the universe’s pursuit of Venus across the skies and the record’s titular body of water. “I wake in the forum, to find my gaze fixed on the sun,” she says at one point, addressing Venus on the song Arm of Golden Flame. “Then shall I find you in the chamber, calm, exquisite and, as you smile, an arm of golden flame covers your head.” A music video for one of the album’s most dramatic songs, The Fawn, even features Abramović’s disembodied head forming in the clouds to articulate her lines.

In a wide-ranging interview with Dazed, K and Abramović recalled the chance encounter during a residency at Brooklyn bar and music venue Alphaville, which eventually led to their collaboration of Emerald Sea.

“Someone as powerful as Marina is the last person we expected to show up at this location we were playing,” K said. “But I remember she stood right in front of me as I was performing, literally feet away, and stared at me the whole time. I think most people might find that intimidating, but I actually found it super inspirational; a warm, calming presence. After that, I remember her telling me to never blink, which makes sense for her to say as the master of being present with her audience.”

In other words, she was given an impromptu crash course in the Abramović Method. 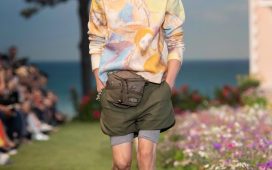 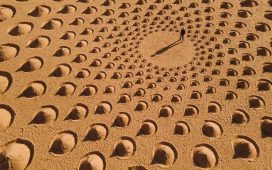