At the risk of sounding smug, I’ve never been so thankful that, a dozen or so years ago, I moved with my young family from London to the heart of Somerset. Like many city-dwellers who have made the change, I do sometimes miss the transport, theatres, cinemas and shops of the capital. Now that these are out of bounds for the foreseeable future, I value even more the things we moved here for: time, space, and nature.

During the fine weather of the past week or so, mygarden has been alive with the sounds of spring. From my office window I can hear the metallic wheezing of a greenfinch, the metronomic sound of a chiffchaff calling out its name, trilling wrens, repetitive song thrushes, tuneful robins, and just now, a quartet of ravens high in the sky overhead, uttering their deep, croaking call. And this is not just at dawn and dusk – the traditional peak times for birdsong – but all day long.

My large, rural garden is a far cry from the place I grew up – a three-bed semi on a suburban housing estate with a small lawn and flowerbeds – and indeed very different from the various urban properties I lived in for much of my adult life. But nevertheless, when I did live in London, I used to see all sorts of wild creatures in, from and over my various gardens.

One advantage of city life is that most creatures are far less fearful of people in the urban jungle than they are in the countryside, meaning you can often get much closer to them. So, wherever you live in the UK – from the centre of the city to the heart of the country – there will always be plenty of wildlife on your doorstep.

Given that we are all now living under the equivalent of house arrest, I’m thanking my lucky stars that this crisis has happened just as spring has sprung. Imagine if it had begun in November, when birdsong was non-existent, and the days were shortening. Instead, the timing could not be better, as nature nears its peak of activity. Over the next three months – which, God willing, will be all we have to spend in enforced isolation – Britain’s fauna and flora will be flaunting itself as never before.

My teenagers appear to have locked themselves in their bedrooms for the duration, only emerging for meals or to walk the dog. So I have sympathy for those of you with young children, with their constant demands. The good news is that there’s no better way to stave off boredom – and get them outdoors – than engaging their interest in the birds, bees and butterflies making their home in your garden. Keeping a nature diary, making notes and drawings of what you see, is also a great way to motivate them and to maintain your new interest.

Before you do, you need to persuade the wildlife to come to your doorstep. If you have never tried to attract birds to your garden, it’s easier than you think. Just as we humans need food, drink and accommodation, so do they. So your mission – should you choose to accept it – is to create the avian equivalent of a five-star hotel and restaurant.

There are plenty of reputable mail order companies selling a selection of feeders and food – from a huge tubular apparatus to a small feeder that can be put on the outside of a window – so even if you don’t have a garden, the birds will still come. But don’t cut corners on quality: during the breeding season, when birds need to find natural food such as caterpillars for their chicks, they rely on high-energy foods like kibbled sunflower hearts.

Water is equally important, especially during warm, dry weather. A bird bath serves a dual purpose: the birds can both drink and bathe, sprucing up their plumage so they can fly and feed more efficiently.

If you haven’t already done so, it’s perhaps a bit late to put up nestboxes, as resident birds such as blue and great tits will already have started prospecting for sites. But if you can get hold of one – or make it yourself – during the next few days it might still be worth doing so. Ideally, put it two or three metres up a tree or fence post, facing north or east (not south or west as the chicks may overheat in the sun).

Alternatively, if you have shrubs and bushes in your garden, robins, dunnocks, wrens, blackbirds and song thrushes may already be nesting there. One way to tell if they are is to watch them closely: if you see a bird carrying items of food in its beak, it is almost certainly taking them back to its chicks.

Don’t forget to look above you. In towns and cities, house martins and then swifts will soon be with us, the latter tearing across the sky in tight-knit squadrons while uttering their screaming sounds. Here in Somerset, along with many people across the northern hemisphere, I’m eagerly awaiting the first swallow returning from its African winter quarters.

Many birds are visible all year round, but now that spring is here, insects are also beginning to emerge. Bumblebees are tough enough to have been on the wing since February: check out the colour and pattern on their abdomen (the rear end) to see which species are visiting your garden.

Butterflies are also out on warm, sunny days: many species love gardens as there are plenty of nectar-rich flowers for them to feed. So far only a few species have appeared, but over the next few weeks I’m looking forward to catching up with orange-tip, speckled wood, common and holly blues, and red admirals – which fly here all the way from southern Europe and North Africa. The key to attracting these and other insects is to plant flowers: native varieties are best, but any nectar-bearing blooms will work.

Mammals are a lot trickier to see: even the really common species are often shy and mainly nocturnal. You may already be aware of foxes in your neighbourhood – and perhaps even badgers if there is a sett nearby. It’s OK to feed them as long as you don’t put the food too close to the house, and also avoid giving them items out of your hand.

To see smaller mammals such as wood mice, voles and shrews, you’ll need to invest in a trail camera, so you can record what goes on in your garden while you are asleep, and then upload and watch the footage the next day. You will probably get lots of cats too.

Another largely nocturnal group of visitors to your garden are moths. Forget your hostility towards the handful of species whose caterpillars munch through your best woollens: moths are one of the most diverse, beautiful and fascinating creatures on the planet – yet most of us never even see them. To do so, simply wait until dusk, ideally on a warm, muggy and moonless night, and then shine a bright torch on to a white sheet. You’ll be amazed at what you find: including impossibly huge and exotic hawkmoths, which are found throughout Britain, including in our towns and cities. Younger children are especially enchanted by these fascinating and mysterious creatures.

These wild visitors are much more interesting if you know what you are looking at so it’s well worth investing in a decent pair of binoculars (for birds and mammals), and in two or three field guides for the key groups you want to identify. Make sure you choose those that only cover British wildlife (not Britain and Europe), otherwise you’ll find that there are lots of species found only on the continent which we never see here at home.

For birds, I’d recommend the RSPB’s Pocket Guide, while for insects those from British Wildlife Publishing are superb. And there are sound guides available too, to help you identify birdsong. The downside is that, because of the increased demand for books and other products, it may take a few days or even weeks to get hold of some titles.

But why should you bother engaging with the natural world at all? Partly, for your own sanity: it is now proven that being in touch with nature – especially birdsong – is good for your health and wellbeing. Reducing stress and putting the world into perspective is exactly what we all need right now.

Nature needs us, too: we don’t need reminding that we are living at a time of an even greater emergency – the climate crisis. The more we know about the natural world, the more we can help it – as Sir David Attenborough wisely noted, “No one will protect what they don’t care about; and no one will care about what they have never experienced.”

Finally, appreciating the part nature plays in our lives is also, I would argue, an essential part of what makes us human. If any good can emerge from the current situation, then surely one outcome might be a greater appreciation of what nature means to us, and what, in turn, we can do for nature. And whatever the future holds, I promise that you will never ever regret engaging with the wildlife on your doorstep.

• Stephen Moss is an author and naturalist based in Somerset, who teaches an MA in Travel and Nature Writing at Bath Spa University. His latest book is The Accidental Countryside: Hidden Havens for Britain’s Wildlife (Guardian Faber)

Five things to look out for in your garden

With its smart black, white yellow and green plumage and perky habits, the largest member of the tit family is found in most urban and rural gardens. Listen out for its syncopated song: “tea-cher, tea-cher”, with the stress on the second syllable – hence my children’s name for it, the “teacher bird”.

Britain’s commonest bird is normally elusive, but much easier to see at this time of year, when the males make up to half-a-dozen nests before the female chooses her favourite. Look out for a tiny brown bird with whirring wings and, when it lands, a cocked tail; and listen for its loud, trilling song.

Four species that overwinter as adults have already emerged: the peacock, small tortoiseshell, comma and bright yellow brimstone. And look out for the delightful orange-tip – like a cabbage white with Jaffa-coloured wingtips.

If you are lucky enough to have a garden pond, or just some water nearby, this is the peak time for our amphibian species to be laying their spawn – with tadpoles soon to follow.

Britain’s favourite bird is at its most belligerent, with the males chasing off any rivals that dare to invade their garden territory. Males are also the ones that sing that delicate, tuneful song; the females, which look identical, are busy building a nest. 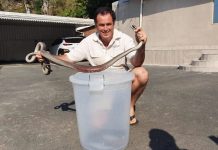 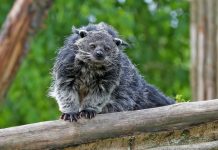 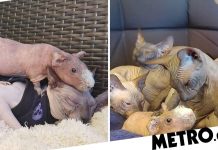