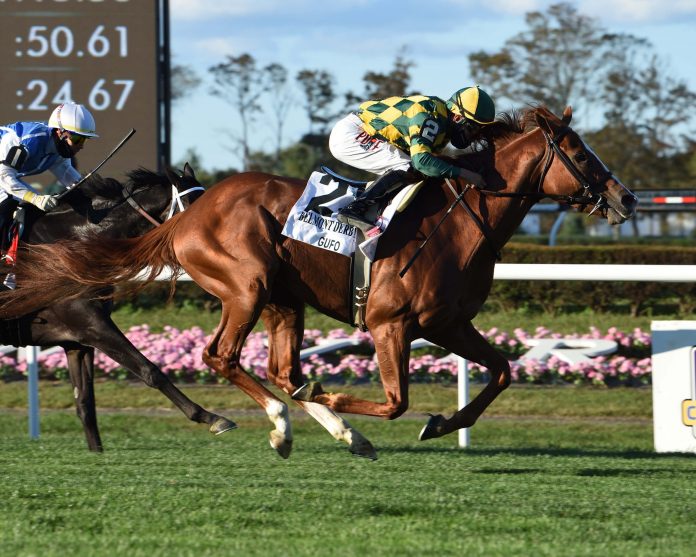 The $300,000 Hollywood Derby (G1) has been a showcase for East Coast-based trainers in recent years, and Saturday’s edition has another strong contingent looking to continue the trend. 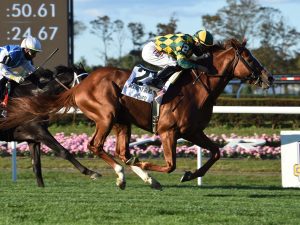 Gufo at the Belmont Derby – Courtesy of NYRA press release

Maybe there’s something in the Del Mar air that helps these East Coast invaders run well. Brown has saddled two of the past four winners (Raging Bull in 2018 and Annals of Time in 2016), and Maryland-based Tony Dutrow won with Mo Town in 2017. Last year, California-based Peter Miller broke the run when he won with Mo Forza.

Make no mistake, though. This is one strong field of 3-year-olds going 1 1/8 miles on the turf on the final weekend of the Del Mar meet. Five graded stakes winners are in the field.

Decorated Invader is a Grade 1 winner (2019 Summer Stakes), and has won three of five in 2020, with a runner-up finish to Get Smokin by a head in the Hill Prince (G2) at Belmont on Oct. 18 in his previous start. He will be ridden by Joel Rosario and leave from post 10. Get Smokin, trained another East coaster, Tom Bush, also is in the field at 12-1.

Gufo comes into the race off a victory in the Belmont Derby (G1) on Oct. 3. Gufo will be ridden by Flavien Prat and leave from post 13.

Domestic Spending won the Saratoga Derby Invitational, beating Gufo by a head, on Aug. 15, and is 3-of-4 in 2020 after not running in 2019. The gelding will be ridden by Irad Ortiz. Jr., and leave from post 8.

The Hollywood Derby dates back to 1938 at shuttered Hollywood Park. Del Mar picked up the race in 2014 and kept the name. Among past winners are Busher, A Gleam, Swaps, Round Table, Bold Reason, Riva Ridge, Affirmed, Flying Paster, Codex, Royal Heroine, Paradise Creek, Johar, Court Vision and California Chrome.

Get Smokin, a son of Get Stormy, will likely be on the front end from the start under Mike Smith. The distance may be a bit far for him and he seems to like the yielding turf when it will be firm on Saturday, but shipping for this race makes sense since he’s at the top of his game. 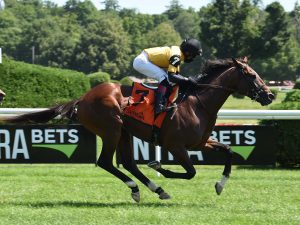 The local contingency will be led by Twilight Derby (G2) winner Smooth Like Strait (second choice at 7-2). He has won both starts over Del Mar’s Jimmy Durante turf course (2019 Cecil B. DeMille [G3] and this year’s La Jolla Stakes [G3]). Michael McCarthy trains the son of Midnight Lute, who will be ridden by Umberto Rispoli from post 2.

Reigning champion juvenile Storm the Court, who hasn’t won in six starts since last year’s Breeders’ Cup Juvenile (G1), was second to Smooth Like Strait in the La Jolla in his turf debut and returns to the grass following a sixth-place finish in the Kentucky Derby (G1) on Sept. 5.

Scarto was second in the Twilight Derby last out and returns seeking to turn the tables. The Mike Puype-trained son of Paynter likes the Del Mar turf course (3-2-0-0) and after two troubled trips in his most recent starts, may fare better with a clean race here under jockey Manny Franco.

Ever Dangerous won the Bryan Station Stakes at Keeneland in his last start, which was at this nine-furlong distance. George Weaver trains the son of Kittens Joy, who will carry Hall of Famer Victor Espinoza from post 11.

Taishan was second in the American Turf Stakes (G2) and was subsequent seventh in the Bryan Station. He makes his debut over the Del Mar turf under jockey Jose Valdiva, Jr. and breaks from post 4.

Strongconstitution won the one-mile Let It Ride Stakes on Nov. 1 and takes a jump up in class here for trainer Doug O’Neill. Abel Cedillo will ride from post 7.

Hall of Famer Richard Mandella sends out a pair in Kanderel, who is a first-time gelding after finishing sixth in his most recent start in the Del Mar Derby; and Lane Way, a close third in the Let It Ride to Strongconstitution who is making his graded stakes debut. Geovanni Frankel will ride Kanderel from the rail and Drayden Van Dyke will be aboard Lane Way, who drew post position 12.

The Hollywood Derby is the ninth race with a post time of 4:30 p.m. PT.

California native and lifelong horsewoman Margaret Ransom is a graduate of the University of Arizona’s Race Track Industry Program. She got her start in racing working in the publicity departments at Calder Race Course and Hialeah Park, as well as in the racing office at Gulfstream Park in South Florida. She then spent six years in Lexington, KY, at BRISnet.com, where she helped create and develop the company’s popular newsletters: Handicapper’s Edge and Bloodstock Journal.

After returning to California, she served six years as the Southern California news correspondent for BloodHorse, assisted in the publicity department at Santa Anita Park and was a contributor to many other racing publications, including HorsePlayer Magazine and Trainer Magazine. She then spent seven years at HRTV and HRTV.com in various roles as researcher, programming assistant, producer and social media and marketing manager.

She has also walked hots and groomed runners, worked the elite sales in Kentucky for top-class consignors and volunteers for several racehorse retirement organizations, including CARMA.

In 2016, Margaret was the recipient of the prestigious Stanley Bergstein Writing Award, sponsored by Team Valor, and was an Eclipse Award honorable mention for her story, “The Shocking Untold Story of Maria Borell,” which appeared on USRacing.com. The article and subsequent stories helped save 43 abandoned and neglected Thoroughbreds in Kentucky and also helped create a new animal welfare law known as the “Borell Law.”

Margaret’s very first Breeders’ Cup was at Hollywood Park in 1984 and she has attended more than half of the Breeders’ Cups since. She counts Holy Bull and Arrogate as her favorite horses of all time. She lives in Pasadena with her longtime beau, Tony, two Australian Shepherds and one Golden Retriever. 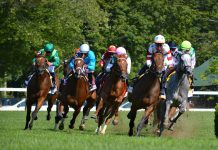 Bodexpress To Enter Stud At Barton Thoroughbreds In California For 2021