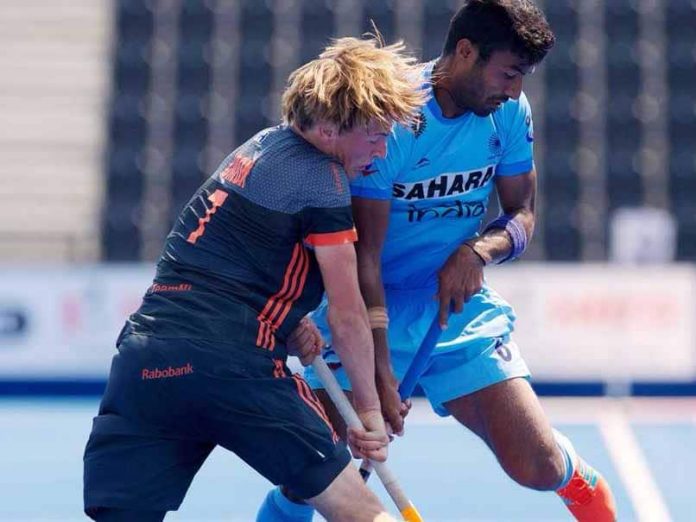 India fought hard before losing 1-3 against higher-ranked Netherlands to suffer their first defeat in the Hockey World League League Semi-Final in London on Tuesday. All the goals came in the first two quarters of the match with Netherlands scoring through Thierry Brinkman (2nd minute), Sander Baart (12th) and Mirco Pruijser (24th), while Akashdeep Singh sounded the board for India with a brilliant field strike. The loss, however, did not make any impact on India’s chances in the tournament as they had already qualified for the quarter-finals before today’s encounter as they had registered wins in their first three games.

Netherlands topped Pool B with an all-win record from four matches, while India finished second with three wins from four games.

India will take on Malaysia on Thursday while Netherlands will face fourth-placed team in Pool A – China – in the quarter-finals on the same day. Going by world rankings, Netherlands (4th) were rated as favourites against the sixth-placed Indians and the Dutchmen played the match on the expected lines, controlling the proceedings for major part of the match.

The Indians were slow to get off the blocks and the Dutch caught the Indian defence off guard as early as in the second minute when Sardar Singh lost possession of the ball just outside the Indian circle and Brinkman made no mistake in giving his side the lead.

Netherlands doubled their lead in the 12th minute when Baart scored from their first penalty corner. Netherlands made it 3-0 in the 24th minute when Pruijser scored after receiving a through pass from Bjorn Kellerman.

It took a brilliant field strike from Akashdeep to bring India back into the match as Roelant Oltmans’ men went into the breather trailing 1-3.

After the change of ends, the Indians created a few scoring chances with Ramandeep Singh and Mandeep Singh at the fore but Netherlands goalkeepers Sam van der Ven and Pirmin Blaak, who took the field through rolling substitution, made some fine saves to keep their lead intact.