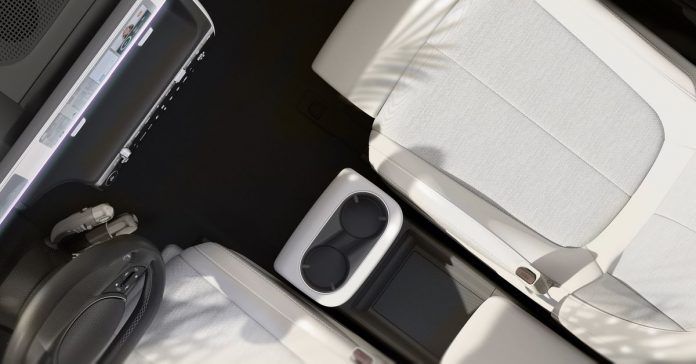 Hyundai is teasing the first interior photos of the Ioniq 5 ahead of its world premiere on February 23rd. It’s Hyundai’s first EV to utilize the Electric-Global Modular Platform (E-GMP) — the same platform that Apple is said to have been interested in for its oft-rumored self-driving car. E-GMP’s flat battery and long wheelbase allows for a more spacious and customizable interior for both passengers and cargo.

The big design flourish teased today is a sliding center console inside the Ioniq 5. The so-called “Universal Island” moves out of the way so that the driver or passengers can easily enter and exit either side of the car when parked in a narrow spot, for example.

Hyundai says that the driver and front-passenger seats are equipped with leg rests to relax while the vehicle recharges. The seats can also be repositioned so that adults in the front can care for pets and children seated in the rear. Hyundai notes that the Ioniq 5’s interior will be clad with eco-conscious materials.

The Ioniq 5 appears to have Tesla’s Camp Mode in its sights with a feature that effectively turns the car into a rolling generator with 3.5 kW of Vehicle to Load (V2L) power. That’s enough juice to power beefy 110V/220V appliances like a full-sized oven, treadmill, or five giant speakers, as Hyundai’s already teased. Tesla’s can’t do that without hacking an inverter into the circuitry and possibly voiding your warranty. The Ioniq is fitted with V2L outlets on the inside and outside of the car.

Other known capabilities of the Ioniq 5 include ultra-fast charging which allows it to drive more than 100km (62 miles) after a 5-minute charge. Hyundai has previously claimed that E-GMP vehicles will be capable of over 500km (310 miles) on a single charge.

Hyundai’s Ioniq 5 will make its world premiere on February 22nd at 11pm California time, or 8pm in Germany on the morning of the 23rd.