Nadal, a Grade 1 winner who went unbeaten in his four career starts, has been sold to enter stud at Shadai Stallion Station in Japan for the 2021 breeding season.

A fee will be announced at a later time for the 3-year-old son of Blame, who raced for owners George Bolton, Arthur Hoyeau, Barry Lipman, and Mark Mathiesen. Bob Baffert trained the colt, who was retired in May after suffering a condylar fracture in his left foreleg, requiring surgery.

Up until that point, Nadal was considered one of the favorites for this year’s Triple Crown races, boasting an imposing record in California and Arkansas. He debuted in January of his 3-year-old season, winning a maiden special weight at Santa Anita Park by 3 3/4 lengths. He then made his stakes debut in the Grade 2 San Vicente Stakes, winning by a half-length.

The colt began pointing toward the Triple Crown in earnest with a shift to Oaklawn Park, where he took the G2 Rebel Stakes, then exploded to win a division of the G1 Arkansas Derby by three lengths.

Bred in Kentucky by Sierra Farm, Nadal is out of the placed Pulpit mare Ascending Angel, putting him in the family of champion Pleasant Stage and Grade 1 winner Journey Home. He was a $700,000 purchase at the 2019 Fasig-Tipton Gulfstream Selected 2-Year-Olds In Training Sale.

It’s Back: Another Chance To ‘Beat Ray Every Day’ At Del Mar 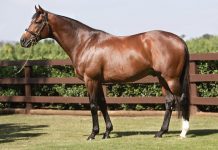