Canadian-bred graded stakes-winner God of Love will look to transfer his good form from Tapeta to dirt when he ships to Aqueduct Racetrack for the Grade 3, $250,000 Withers on Feb. 5.

The nine-furlong test for 3-year-olds is the next local prep on the Road to the Kentucky Derby, awarding the top-four finishers 10-4-2-1 qualifying points toward the Grade 1, $3 million Kentucky Derby on May 7 at Churchill Downs.

Eclipse Thoroughbreds and Gary Barber’s God of Love, trained by Hall of Famer Mark Casse, is already a stakes winner over turf and Tapeta in only four starts. Two starts after capturing the Cup and Saucer in October on the Woodbine turf, the chestnut colt provided his young sire Cupid with a first graded stakes winner when taking the 1 1/16-mile Grade 3 Grey on Nov. 28 on the Woodbine Tapeta.

“He’s a pretty good horse. If he can have the same type of form on dirt that he does on the synthetic, he’ll be a force. In his last race, he ran a 4.5 Thorograph number, which puts you right there,” Casse said.

One start prior to the Grey, God of Love finished a troubled fifth in the nine-furlong Coronation Futurity on the Woodbine Tapeta after having to steady several times.

“He was the favorite in his start before the Grey and I awarded him worst trip of the year of any horse I ran last year,” Casse said. “It was a terrible, terrible trip. He checked about three or four times.”

God of Love joined Casse’s winter division at Palm Meadows Training Center in Florida, where he has worked three times since the Grey. The Withers will be God of Love’s first race outside of his native Canada.

“I think he’ll end up being champion 2-year-old in Canada. The reason I sent him to Toronto was because he was a Canadian-bred,” Casse said.

Bred in Ontario by William D. Graham, God of Love is out of the Three Wonders mare No Wonder, a half-sister to Grade 1-winner Weemissfrankie, who also produced Canadian-bred stakes-winner Muskoka Wonder.

God of Love was a $100,000 purchase at the OBS March Sale, where he was consigned by Golden Thoroughbreds Training and Sales.

Other probable candidates for the Withers include Courvoisier, Smarten Up and Cooke Creek – the top-three finishers of the Jerome – as well as January 2 maiden winner Constitutionlawyer.

Weekend Lineup Presented By DRFBets: Road To Kentucky Heads To The Big Easy 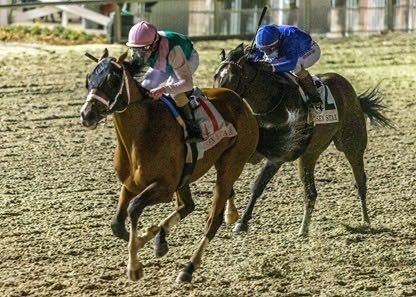