In the second “Win and You’re In” race on the day, Shale (IRE) reversed the form with Pretty Gorgeous (FR) to win the Moyglare Stud Stakes (G1) and gain an automatic entry for the $1 million Breeders’ Cup Juvenile Fillies Turf (G1) through the international Breeders’ Cup Challenge Series.

The Breeders’ Cup Challenge is a series of stakes races whose winners receive automatic starting positions and fees paid into corresponding races of the Breeders’ Cup World Championships, which is scheduled to be held at Keeneland Race Course in Lexington, Kentucky, on Nov. 6-7.

Glass Slippers, a bay daughter of Dream Ahead out of the Mind Games (GB) mare Night Gypsy (GB), had found Battaash (IRE) too hot to handle in her two starts so far this season in the King’s Stand Stakes (G1) at Royal Ascot and the King George Qatar Stakes (G2), but returned to the form that saw her win the Prix de l’Abbaye de Longchamp Longines (G1) in her final start of 2019. Glass Slippers sat just off the early pace before picking up the lead inside the final furlong, and prevailed by a half-length over 18-1 Keep Busy.

Glass Slippers’ trainer Kevin Ryan said: “She’s so tough and genuine, but she has a lot of class.

“She loves it when they go really quick, but the ground was tacky today so she’s done well to cope with that. I’m absolutely delighted. It was Terry Holdcroft’s (owner of Bearstone Stud) decision to miss the Nunthorpe and give her a bit more time and he’s obviously been vindicated. She’s an amazing filly, so simple to train and makes my job very easy. She’ll go back for the Abbaye now.”

Shale earns Group 1 honors in Moyglare Stud Stakes
Later in the day, Derrick Smith, Mrs. John Magnier and Michael Tabor’s Shale (IRE) (9-2) controlled the seven furlongs very strongly to beat her rival Pretty Gorgeous (FR) and win the Moyglare Stud Stakes (G1) by three-quarters of a length. This was the third clash between the two fillies this season. Shale had come out on top in the Frank Conroy Silver Flash Stakes (G3), before Pretty Gorgeous exacted her revenge in the A.R.M. Holding Debutante Stakes (G2). Today, though, it was Donnacha O’Brien’s 2-year-old who triumphed under Ryan Moore to gain an automatic entry for the $1-million Breeders’ Cup Juvenile Fillies Turf (G1).

Shale, a bay daughter of Galileo (IRE) out of the Holy Roman Emperor (IRE) mare Homecoming Queen (IRE), completed the seven furlongs in 1:27.19 over a good course.

It was a successful day for the O’Brien family with father Aidan winning two Group 1 events in France and his two sons Joseph and Donnacha both winning Group 1 races at the Curragh. Donnacha has now won three Group 1s in his first year as a trainer and praised his filly after the race: “It was a very good performance. She has kept progressing throughout the season. She found a lot for pressure and toughed it out. I spoke to Ryan (Moore) after the race and we’ll probably look at the Fillies’ Mile (G1) (at Newmarket) or the (Prix Marcel) Boussac (G1) (at ParisLongchamp) next.” 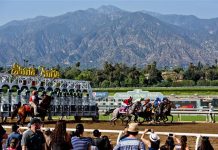 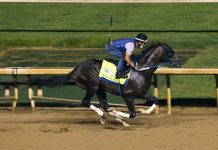