Carrying jockey Adam Beschizza and the yellow and black silks of Lazy F Ranch made famous by Hall of Fame gelding Forego in the 1970s, Gam’s Mission rallied down the middle of the Churchill Downs turf course in Louisville, Ky., to win Saturday’s Grade 3 Regret Stakes for 3-year-old fillies. The win gave Cherie DeVaux her initial graded stakes victory since taking out her trainer’s license in 2018.

A daughter of the Galileo stallion Noble Mission (a full brother to Frankel), Gam’s Mission covered 1 1/8 miles on good turf in 1:51.02, winning by three-quarters of a length. Spanish Loveaffair, the 7-5 favorite, finished second after battling on the front end with Postnup for much of the race. Flown finished third, with Oyster Box fourth in the field of eight, followed by Barista, Munnyfor Ro, Line Dancing and Postnup. Saranya scratched.

Gam’s Mission raced in fifth early after being bumped at the start by Postnup, who veered outwardly from the number six post position and then raced to the front to secure an early advantage over Spanish Loveaffair. Postnup went the opening quarter mile in :24.55 and the half in :49.56 under pressure from the favorite, who put Postnup away after six furlongs in 1:14.27.

Beschizza swung Gam’s Mission out for a clear run at the top of the stretch, battled with Spanish Loveaffair and Flown inside the eighth pole after a mile in 1:38.90, then gradually edged away approaching the wire. Flown was beaten just a head for second.

The win was the third consecutive triumph for Gam’s Mission, whose only defeat came at the hands of eventual G1 Breeders’ Cup Juvenile Fillies Turf winner Aunt Pearl in a Sept. 1, 2020, maiden race at Churchill Downs. She won her 2021 debut in a maiden race at Fair Grounds on March 21, then came back for an allowance victory at Churchill on May 8.

Gam’s Mission was produced from the War Pass mare, Auntie Martha, a Lazy F Ranch homebred presumably named after Martha Gerry, who campaigned three-time Horse of the Year Forego and was honored as an Exemplar of Racing at the National Museum of Racing and Hall of Fame in Saratoga Springs, N.Y., just prior to her death in 2007. Gerry was the aunt of William S. Farish, who stood Noble Mission at his Lane’s End prior to the horse’s export to Japan.

Cornelia Corbett, the daughter of Martha Gerry, continues to race a handful of horses in the name of Lazy F Ranch. Her son, Rick, is a partner in Gam’s Mission, the first horse he bought into, according to Bill Farish, son of the Lane’s End owner. 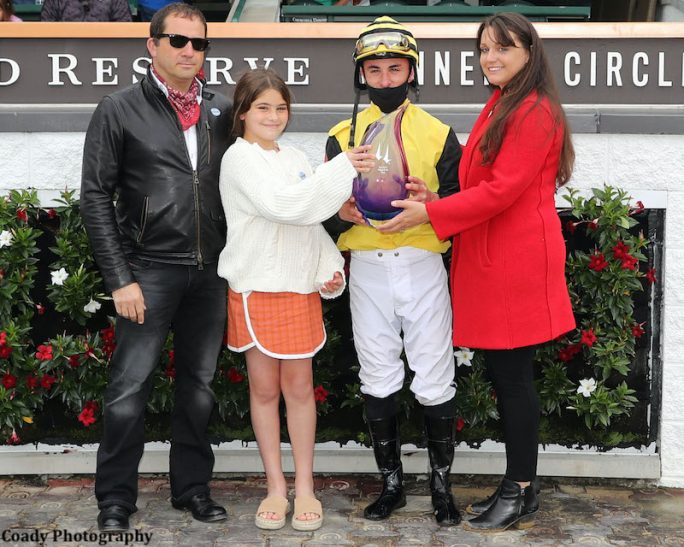 Sconsin, Bell’s The One Among Salty Cast For Saturday’s Roxelana Stakes

Letter To The Editor: Move By The Jockeys’ Guild At Monmouth Dangerous, Unfair To Riders

Love Shows Her Heart In Prince Of Wales’s Stakes

Alex Waldrop To Retire As NTRA President At End Of 2021