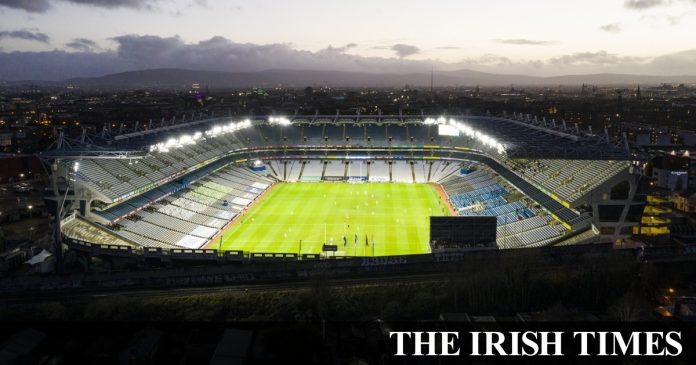 GAA director general Tom Ryan delivered his annual report yesterday, mixing the downbeat – record financial losses, the human cost of the pandemic and uncertainty facing into 2021 – with a defiant belief that things would turn a corner and the association would once more be able to concentrate on the playing of its games.

There was virtually no reference either in the report or at the media briefing to last week’s news that the games no longer had an exemption from Level 5 restrictions beyond an emollient answer from Ryan to a question about the development.

“We want to be playing but we don’t determine public policy. We implement it. As things stand at the moment, we can’t play. I can understand that when you consider the sheer scale and duration of the Allianz League, that’s a lot of people, it’s a lot of travel, all of those people are like ourselves embedded in communities and so on.

“We had plans to be advancing towards [playing]. We can’t do it at the moment. It’s disappointing because that’s our raison d’etre but we will be back. A bit like last year when we get the chance to do it, we’ll do it well; we’ll do it properly; we’ll do it safely. I can’t honestly tell you when that’s going to be. I hope it’s not too long.”

That sense of having simply to wait on developments informed many of the answers: any idea when they might get playing again, would the league have to be dropped and might it be time to flip the season like in 2020 and play the intercounty championships at the end of the year?

The bleakness of the financial picture – consolidated losses of €34 million – wasn’t thought likely to be alleviated by much this year but Ryan in his report was grateful to the commercial partners, who stayed involved during a very trying year.

“We were very fortunate this year – a lot of our sponsors and commercial partners were very good to use likewise on the broadcasting front. We don’t give up. We try and get as much as we can in terms of whatever revenues are there and salvageable.”

It would though still be the case that public support would be needed again.

“We try and manage our costs as best we can but uncomfortable as it is to be saying it we will be dependent to a certain extent on external assistance from the state again, there’s no point in misleading people about that.”

One positive spin-off of the crisis was a reduction in the amount of money spent on preparation of intercounty teams, an issue that Ryan had highlighted in last year’s report.

“Despite a reduced schedule of activity for the year ended 31st October, 2020, for the intercounty game, a total of €18.8 million was spent in the year on preparing county teams. Admittedly this represents a reduction from €29.7 million in 2019 but it is still a sizeable resource commitment. The reduction was delivered through the truncated intercounty season along with a number of new and novel measures.

“We saw the introduction of maximum panel sizes of 32, and a limit to three training sessions per week. We introduced a centralised system of player expenses management to facilitate better analysis and more timely payment. Crucially too, our players all agreed to a reduction in the player mileage rates which it is important to acknowledge. In short, everybody played a part when called upon.”

The need for a more sustainable intercounty structure was acknowledged with Ryan saying that the next step could be the streamlining of the size of back-room management teams at intercounty level. He was also keen to emphasise that this wasn’t purely about saving money.

“It’s not a financial imperative, primarily. Finance is one of them but there are other things too. Purely the amount of time and the demands we put on people – the imbalance between training versus matches, there are all manner of things we can rebalance by having a look at the duration and extent of the season, putting in a proper closed season, putting a better framework around training versus matches element of it might be.”

Asked would the four provinces continue to move in lockstep should a faster vaccine rollout advance the public health situation in Northern Ireland, Ryan suggested that it would be better for the association to move forward as one.

“What we did was we tried to apply the same measures, the same standards to everybody. And that would still be the default position today. Notwithstanding vaccinations and things like that, it’s important that we stick together and advance together. That would really be the preference still.”