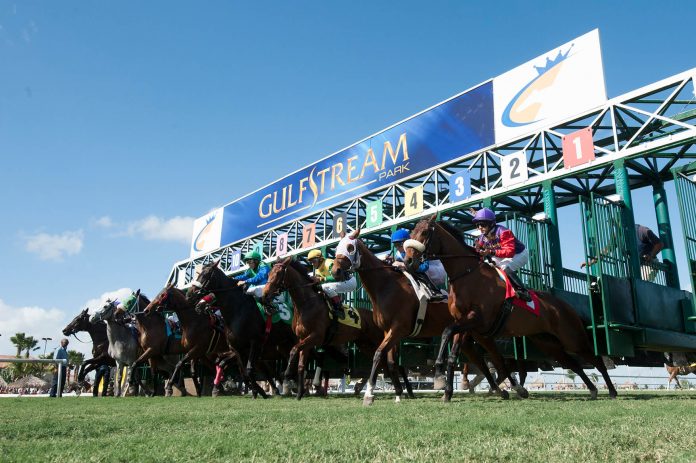 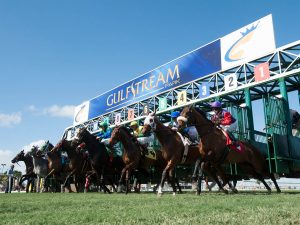 Saturday’s Fountain of Youth card at Gulfstream Park is a doozy, featuring 14 races including 10 stakes races (nine graded) and headlined by the $400,000 Fountain of Youth (G2) for 3-year-olds on the Kentucky Derby trail going 1 1/16 miles.

The all-stakes late Pick 5 sequence encompasses races 10-14, and with a 50-cent denomination, a serious swing at the Pick 5 will be an accessible and affordable play even for mid-range players.

Here’s a look at the late Pick 5, including the Fountain of Youth.

The Pick 5 sequence starts with this one-mile stakes on the main track for 3-year-old fillies that has attracted a nine-horse field, including two apparent standouts — #6 SPICE IS NICE (7-5) and #9 TONALIST’S SHAPE (7-2).

Spice is Nice exits her one-mile career debut for trainer Todd Pletcher where she destroyed the field by 12 lengths and earned a strong speed figure, and wastes no time testing the waters here versus stakes company at the same distance as her victory.

Tonalist’s Shape is the other horse to use on your tickets based on her undefeated 4-for-4 record (3-for-3 at Gulfstream) to begin her career, including a win last time in the Forward Gal (G3) and a career-best outing the time before that in the Hut Hut Stakes at this course and distance.

This is a full field loaded with contenders going one-mile on the grass with no horse at less than 4-1 odds on the morning line.

Todd Pletcher’s #5 SOMBEYAY (9-2) lost to Hay Dakota last time, but should turn the tables here and prove the best of this field with expected improvement in the second race back from the six-month layoff. Ran a giant race last time after pressing a blazing pace and holding on for second in a race otherwise dominated by closers, who finished 1-3-4.

The other top contender is another horse making his second start off nearly a six-month layoff, #4 HEMBREE (5-1), trained by Mike Maker. Like Caribou Club, Hembree failed to fire behind a moderate pace last time in the Tampa Bay Stakes (G3), but owns some big speed figures in the past performances and should rebound in this second start off the layoff.

A potential upsetter at a price is #12 FLYING SCOTSMAN (15-1), who has flopped at longer distances but excels at one-mile and exits a useful prep at the Fair Grounds. Last year’s Canadian Turf winner, #3 KRAMPUS (12-1), seems to be off-form but could awaken in this spot and shouldn’t be overlooked.

This field features some contenders exiting a try in the Pegasus (G1) last time out, and shortening up to one-mile from 1 1/8 miles around two turns last time versus the 1-2-3 finishers from last month’s one-mile Fred Hooper (G3) here at Gulfstream, and all of those horses seem to be the ones to focus on in this race.

#9 MR FREEZE (7-2) set the pace and ran a creditable second in the Pegasus and has maintained good form since last summer encompassing five in-the-money finishes including a win in the one-turn, one-mile Ack Ack (G3) at Churchill Downs. Returns to one-mile for the first time since then, and looms the horse to beat.

#7 TRUE TIMBER (15-1) hasn’t reached the winner’s circle in a while, but is best at one-mile as evidenced by his third-place finishes in the Cigar Mile (G1) and Kelso Handicap (G2), as well as his runner-up finish in the 2018 Met Mile (G1). Even Bodexpress has a shot in here, despite the fact he tends to run second and is a better bet in the exacta and trifecta than he is in the Pick 5.

Of the top 3 exiting the Fred Hooper – Phat Man, Zenden, and Rare Form – the best horse to use in this spot is #5 ZENDEN (9-2) from Pletcher ridden by John Velazquez. He dueled on a blazing pace and held on well for second as the other two sat better trips from off the pace and took advantage of the fast fractions to come from behind.

In this 1 3/8-mile race for distance turf horses, it is difficult to overlook the morning line favorite, #6 ZULU ALPHA, coming out of his victory in the Pegasus Turf (G1) last time out to extend his local record to 3 wins in 4 starts on the Gulfstream turf course.

Multiple graded stakes winner consistently runs speed figures good enough to beat these; and while the horses in this field often trade wins and losses, Zulu Alpha is usually the one who gets the best of this at Gulfstream, just as he did when winning this same race last year.

Another horse for the course is #3 A THREAD OF BLUE (9-2), who is also 3-for-4 lifetime at Gulfstream after sweeping last year’s Dania Beach and Palm Beach (G3) for 3-year-olds.

A Thread of Blue is loaded with early speed, and as you look at the possible pace scenarios for this race; you notice the possibility that this horse could get loose up front if able to benefit from the prep under his belt last time out. Other contenders could be played in this field and could win based on their best efforts, but playing Zulu Alpha and A Thread of Blue is enough to give up a strong off-the-pace, on-the-pace 1-2 punch on your tickets.

This Kentucky Derby prep race at 1 1/16 miles has drawn a fascinating full field of 12, and the key seems to be whether or not beaten Breeders’ Cup Juvenile (G1) favorite #5 DENNIS’ MOMENT (2-1) can rebound from that loss in this 3-year-old debut outing off nearly a four-month layoff for trainer Dale Romans.

Stumbled badly to begin far behind the field and lost all chance at the start in the BC Juvenile; and if you toss out that loss you have a horse that had looked like dynamite in the two races before that, including a 19-length maiden win at Ellis Park and a victory in the Iroquois (G3) at Churchill. He’s a must-use on all tickets but fresh off a long layoff, accident prone, and certainly no slam dunk.

The best alternative at a price looks like #10 SHOTSKI (10-1), who won last fall’s Remsen (G2) at Aqueduct and then finished an underrated second last time out in his 3-year-old debut in the 1 1/8-mile Withers at Aqueduct; where he got hooked in a speed duel and ran on to be best of the speeds in a race that set-up for closers who finished 1-3-4.

Can they rate? Will they try to rate? Can Shotski go wire-to-wire at 1 1/16 miles? Either way, Shotski is talented and certainly worth having on your tickets as those questions get answered.

The third horse to have on your tickets, and in your exacta and trifecta boxes, is #12 CHANCE IT (7-2) trained by Saffie Joseph. In his 3-year-old debut last month, he won $100,000 Mucho Macho Man Stakes at one-mile at Gulfstream off a three-month layoff.

Won two of the legs of Gulfstream’s rich 2-year-old state-bred stakes program last year; this includes the $400,000 In Reality Stakes, which was run at same distance as Fountain of Youth. Draws the far outside, but has won four times on this track and is difficult to count out.

Register for an account with UsRacing.com, grab your welcome bonus, and get your action with the best Fountain of Youth Betting Odds now!

Noel Michaels has been involved in many aspects of thoroughbred racing for more than two decades, as a Breeders’ Cup-winning owner and as a writer, author, handicapper, editor, manager and promoter of the sport for a wide range of companies including Daily Racing Form and Nassau County Off-Track Betting.

He also is regarded as the leading source of news and information for handicapping tournaments and the author of the “Handicapping Contest Handbook: A Horseplayer’s Guide to Handicapping Tournaments”, which made his name virtually synonymous with the increasingly-popular tournament scene.

In addition to contributing to US Racing, he is also an analyst on the Arlington Park broadcast team.

Wright: Anneau d’Or Has ‘Got To Step Up His Game’ In Santa Anita Derby