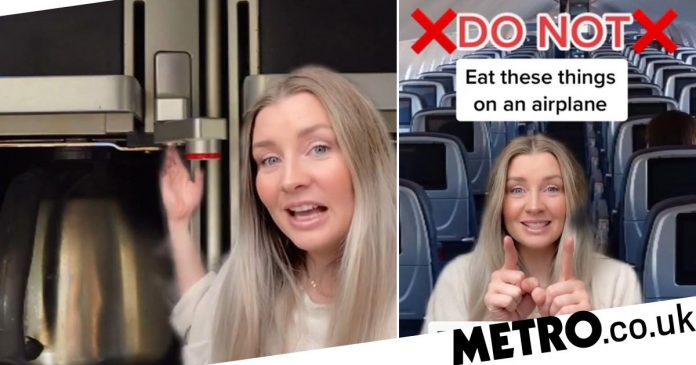 TikTok has brought us dances, lipsyncing, food hacks, and more – but perhaps most exciting are the behind-the-scenes videos that pop up with workers revealing the truth about their workplaces.

We’ve seen things such as Spoons recipe videos and secrets about Primark.

Now a flight attendant has revealed the things you should be aware of when ordering drinks on a plane.

The video was posted by Kat Kamalani, who warns of the things you shouldn’t do with the caption: ‘Just promise me you won’t’ alongside the sick emoji.

She begins by saying: ‘Rule number one, never consume any liquid that is not in a can or a bottle.

‘The reason being is because those water tanks are never cleaned and they are disgusting.’

So disgusting, apparently, that in-flight staff will often skip out on teas and coffees while on board.

‘So talk to a flight attendant, we rarely, rarely drink the tea or coffee, they come from the same water tank and so when you’re drinking that coffee and tea it comes from that hot water and it’s absolutely disgusting,’ Kate says.

To make things worse, Kat then continues by adding that some equipment doesn’t ever get fully cleaned ‘unless it’s broken’, before warning this equipment is placed ‘by the lavatories’.

She then offers a tip to parents who need hot water for a baby’s bottle.

Ask for hot water in a cup and a bottle of water on the side, then make your baby’s bottle using the bottled water and place it inside the hot water cup to heat it up.

This way you avoid the ‘disgusting’ water from the tank.

However, some people in the comments disagreed.

One cabin crew worker said: ‘This doesn’t apply to all airlines. In our airline I can attest that they are really cleaning them.’

Another wrote: ‘I’ve been a flight attendant for 18 years the hot water is fine.’


MORE : A complete history of TikTok – from launch and banning controversy, to best viral trends