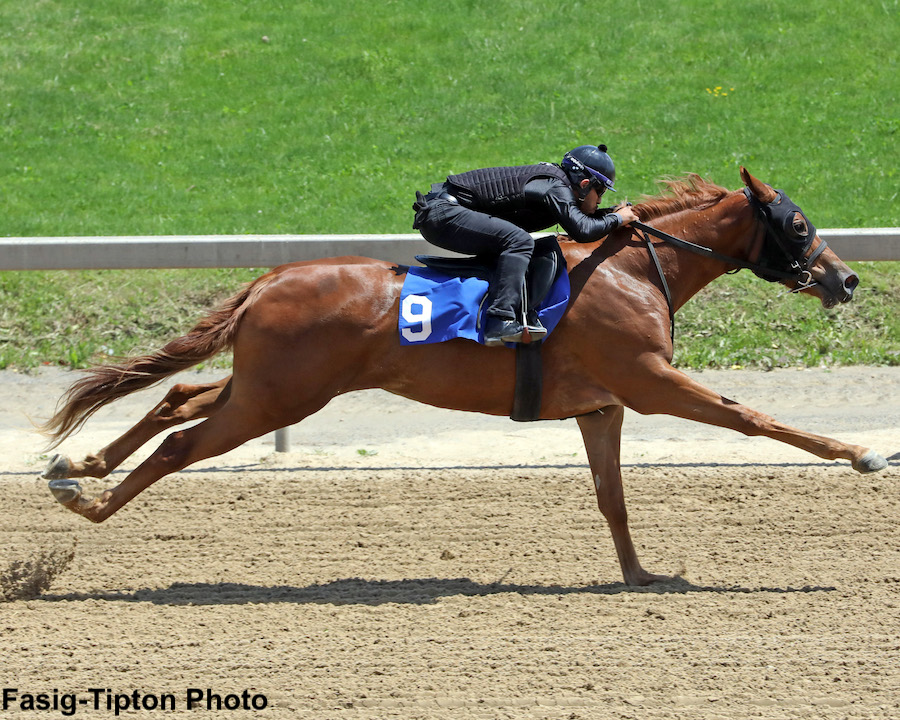 Hip 9, a Neolithic filly, works an eighth in :10 flat at the 2022 Fasig-Tipton Midlantic 2-Year-Olds In Training Sale.

Five juveniles tied for the fastest time at an eighth of a mile on Tuesday during the first of three under-tack sessions for the Fasig-Tipton Midlantic 2-Year-Olds in Training Sale.

The horses breezed over the racing surface at the Maryland State Fairgrounds in Timonium, Md.

Following are the five horses that tied for the day’s fastest time for one furlong, each stopping the clock in 10 seconds flat.

Hip 9, Tim’s Gal, a Neolithic filly out of the stakes-placed Northern Afleet mare Sarahline. The Pennsylvania-bred is consigned by Grassroots Training and Sales.

Hip 20, a More Than Ready colt out of the stakes-placed Seeking the Gold mare Seeking Sheba. Consigned by Golden Rock Thoroughbreds, the colt hails from the family of Canadian champion Perfect Soul.

Hip 30, a first-crop Bolt d’Oro colt out of the stakes-placed Aldebaran mare Shine Softly. The New York-bred is a half-brother to stakes winner The Grass is Blue, and his second dam is the champion turf mare Soaring Softly. Pike Racing consigns him, as agent.

Hip 36, a Practical Joke colt out of the unraced Grand Slam mare Silken Lily. The New York-bred’s dam is a half-sister to the Grade 2 winner and fast-rising young sire Upstart. Scanlon Training and Sales consigns, as agent.

Hip 150, a Nyquist filly out of the placed Lookin at Lucky mare Westside Tapstress. Consigned as agent by Randy Miles, the colt comes from the family of Irish classic winner Canford Cliffs.

Tuesday’s fastest juvenile at a quarter-mile was Hip 202, a first-crop Collected filly who covered the distance in :21 1/5.

The dark bay or brown filly is out of the placed Arch mare Auore, whose runners include the stakes-placed Orageuse and Boreale. Recent Kentucky Oaks winner and Preakness Stakes entrant Divine Oath is on her page. Coastal Equine consigns the filly, as agent.