Shortly before the first coronavirus death in the US was confirmed, Joe Biden condemned Donald Trump’s claim that the outbreak is a “new hoax” orchestrated by Democrats in order to beat him at the polls in November.

“For him to … start talking about being a hoax is absolutely dangerous,” Biden said in Greenville, South Carolina, on Saturday. “It’s just not a decent way to act.”

Not long after Biden spoke, Washington state’s governor, Jay Inslee, confirmed the death in his state.

“It is a sad day in our state as we learn a Washingtonian has died from Covid-19,” Inslee said in a statement. Our hearts go out to his family and friends. We will continue to work toward a day where no one dies from this virus.”

According to the latest World Health Organization (WHO) situation report, 83,652 cases of coronavirus and nearly 2,800 deaths have been reported worldwide.

The vast majority of cases are in China but the spread of the virus has caused havoc with stock markets and international travel and sporting and business events.

Before the news of the Washington state fatality, US authorities reported three new cases in the Pacific north-west overnight, bringing the total to 62.

The president made his startling claim at a rally in North Charleston on Friday night. South Carolina holds its Democratic primary on Saturday, with Biden seeking a victory to re-establish his credentials against national frontrunner Bernie Sanders.

“This is their new hoax.”

Trump repeatedly called Robert Mueller’s investigation of Russian election interference a hoax. The former special counsel did not establish criminal conspiracy between Trump and Moscow but did lay out extensive evidence of contacts between the campaign and Russians and numerous instances of potential obstruction of justice.

Speaking to reporters on Saturday morning, Biden said: “Some of the stuff he says is so bizarre that you can laugh at it. It just so diminishes the faith that people around the world have in the United States.”

Other Democratic candidates weighed in on Trump’s remarks. Sanders asked why Trump “repeatedly think[s] that scientific facts are hoaxes” and said “the most dangerous president in the modern history of our country” was “putting our people’s lives at risk”.

Pete Buttigieg, the former mayor of South Bend, Indiana, told NBC News: “It’s critically important that the administration and the White House handle this in a way that’s based on science and not on politics. I was particularly disturbed to hear the word ‘hoax’ used by the president.”

American lives, Buttigieg added, “depend on the wisdom and the judgement of the president at a time like this”.

Amid criticism for previous budget cuts to epidemic defences as his administration asked Congress for funding to address the coronavirus outbreak, Trump this week placed the vice-president, Mike Pence, in charge of the US response. That move also met widespread criticism.

Republicans and supporters of Trump have fired back, accusing the president’s opponents and the media of seeking political gain from the outbreak.

On Friday night, the president said: “We are doing everything in our power to keep the infection and those carrying the infection from entering the country. We have no choice.”

He also sought without offering evidence to tie coronavirus cases in the US to the southern border, the focus of his hardline immigration policy.

“Whether it’s the virus that we’re talking about,” Trump said, “or the many other public health threats, the Democrat policy of open borders is a direct threat to the health and wellbeing of all Americans.”

On Saturday, Biden added: “Look, this is a serious, serious, serious problem. It’s able to be solved, but it requires us to be absolutely levelheaded and let the scientists have the lead in all of this.

“But for [Trump] to … start talking about being a hoax is absolutely dangerous. It’s just not a decent way to act.”

Extra $600 in jobless pay offers many a lifeline – but will it be renewed?

Trump news – live: President told to ‘just stop’ offensive tweets by own side after lashing out with insults and conspiracy theories as US...

For African-Americans in Uniform, It’s Duty, Honor, Country. But Don’t Expect to Lead.

Why is Trump so quiet about the Biden sexual assault allegation? 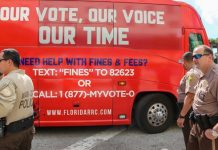 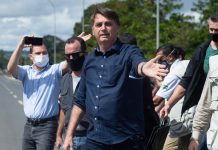 White House Restricts Travel From Brazil, Where Coronavirus Cases Near 350,000

Trump Tweets and Golfs, but Makes No Mention of Virus’s Toll 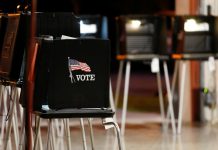 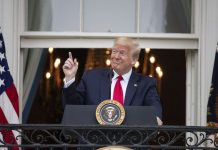 Inside the Beltway: Trump: Pray for peace, remember the fallen 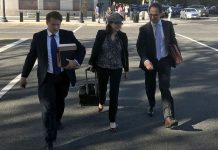 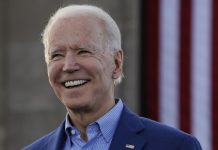