FIFA condemns incidents at England vs Hungary after fan arrested

The game, which finished in a 1-1 draw, was marred by early crowd trouble as Hungary fans clashed with police.

The Metropolitan Police later confirmed a supporter had been arrested “for a racially aggravated public order offence following comments made towards a steward”.

“As the officers made the arrest, minor disorder broke out,” the Met confirmed.

The FA then said it would investigate the incident.

That match was stopped for over 20 minutes, as Poland players walked off the pitch having had plastic bottles thrown at them from the stand after Karol Swiderski gave the away side a 77th-minute lead.

“After the goal, there were full bottles flying in, so it was a bit dangerous, but we came back and finished the game,” Poland’s Robert Lewandowski said after the match.

A statement from FIFA on Wednesday morning read: “FIFA strongly condemns the incidents at England vs Hungary and Albania vs Poland and would like to state that its position remains firm and resolute in rejecting any form of violence as well as any form of discrimination or abuse.

“FIFA has a very clear zero-tolerance stance against such abhorrent behaviour in football.” 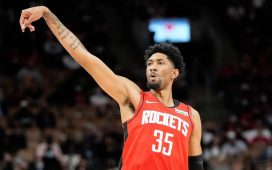