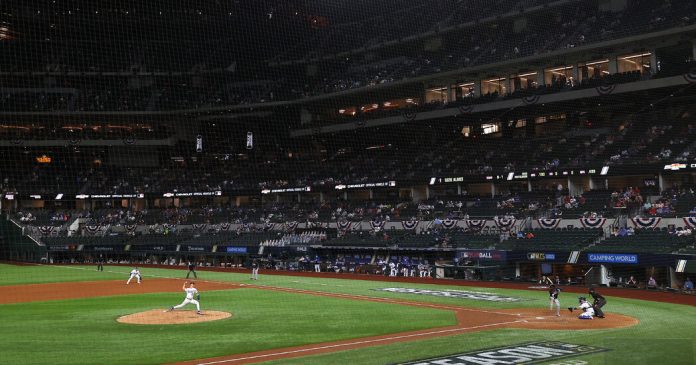 Freddie Freeman spent a decade in the majors, all with the Atlanta Braves, before reaching the National League Championship Series. He made the most of his first swing in the opener on Monday, lifting a 97 mile-an-hour fastball into the seats at Globe Life Field in Arlington, Texas. Then something strange happened.

It was strange by 2020 standards, anyway: The home run ball landed in a row of actual humans instead of stationary cutouts. For the first time in a season ravaged by the coronavirus pandemic, Major League Baseball sold tickets to a game. The league blocked off the first five rows of bleachers with yellow tape, but Freeman’s drive sailed eight rows back.

“We haven’t heard anything other than fake crowd noise, so it was much-needed,” Freeman said later, after the Braves had broken a tie in the ninth inning to beat the Los Angeles Dodgers, 5-1. “The 11,000 people really felt like 50,000 people to us, because we haven’t had any all year. It was just great to have cheering for both teams.”

The fans were instructed to wear masks and stay in groups of four, spaced at least six feet from others. No tickets were sold within 20 feet of the field, dugouts or bullpens. But the fans showed up — the attendance was listed at 10,700 in a ballpark that seats 40,300 — and they saw a textbook postseason game: mostly dominant pitching, won by the team with more homers.

According to ESPN’s Park Factor, which compares home and road statistics, Globe Life Field had the most depressive impact on home runs in the majors this season. But the Dodgers led all teams in homers, the Braves ranked second, and their hitters handled the setting just fine.

After Freeman connected off Walker Buehler in the first, the Dodgers’ Enrique Hernandez went deep off Max Fried in fifth. The game stayed 1-1 until the ninth, when Austin Riley led off with a go-ahead blast. A two-run shot Ozzie Albies soon followed, and homers accounted for five of the game’s six runs.

“I feel like it’s going to be like this all series,” said Freeman, the favorite to win the N.L. Most Valuable Player Award. “That’s all we’ve been facing now, for six games, is 95-plus — it feels like every single guy. But our pitching staff is pretty good, too. It’s going to be hard to string hits together. That’s what the playoffs is all about: It usually comes down to the home run, because getting three hits against a staff like this is going to be difficult.”

The Dodgers managed only four hits in Game 1, and just one base runner after Hernandez’s homer. The relievers Chris Martin, Will Smith and Mark Melancon followed Fried with a perfect inning apiece, and Melancon even caught Albies’s homer as he paused between warm-up pitches in the bullpen.

The Braves traded for Martin, Melancon and Shane Greene last July, and General Manager Alex Anthopoulos signed Smith to a three-year, $40 million contract as a free agent last fall. He also re-signed Martin for two years and $14 million and retained Tyler Matzek, who was signed from an independent league and returned to the majors this summer after a five-year mental struggle to throw strikes.

By shopping in bulk, Anthopoulos created a staff deep enough to withstand injuries and performance declines in the rotation, which now includes only Fried, Ian Anderson and Kyle Wright.

“I don’t want to have to live through the 2019 trade deadline again, where we had to trade a bunch of young assets for the back of the bullpen,” Anthopoulos said. “It’s really tough to do. We felt we had a really good team and we owed it to them, but it was expensive both in terms of salary commitments and giving up young talent.”

The 2019 Braves did win the N.L. East, but flopped in the division series for the second year in a row. Riley, who had hit 18 homers as a rookie, slumped down the stretch and was left off the roster. After hitting .132 in September, he could not argue.

“You never want to think you’re off the roster, but I think everybody knows that I wasn’t playing to my ability, and there just wasn’t a spot on there for me,” said Riley, who hit .239 with eight homers this year. “I just took it to heart and told myself: ‘Going into next year, you’re not going to panic when things aren’t going your way.’ To start off slow this year but just keep at it and keep at it and finally come through is a good feeling.”

Like Freeman, Riley fell behind in the count, 1-2, before homering off a fastball, this one at 98 m.p.h. from Blake Treinen, a sinker specialist who gave up just one home run in the regular season. The ball caromed off the facing of the second deck in left — a home run in Yellowstone Park, as the old saying goes — and the Braves quickly pulled away.

“That’s just what these guys do,” Manager Brian Snitker said. “I say we’re like an N.B.A. game — you don’t want to leave, because a lot of things don’t happen till the last third.”

This time, finally, real fans could take the advice. For the rest of the series, those in the bleachers should bring a glove to the ballpark — along with a mask, of course. 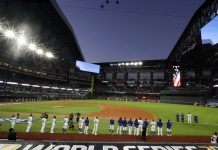 Austin Barnes Give the Dodgers an Unlikely Lift at the Plate 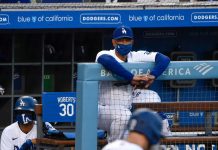 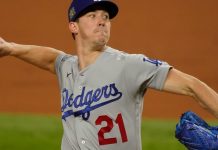 World Series: Dodgers Top the Rays in Game 3 With a Stellar Pitching Performance 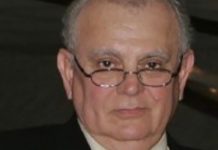 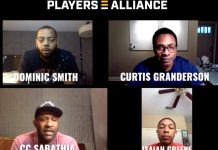 Black Players Continued a Mentoring Tradition Amid a Pandemic 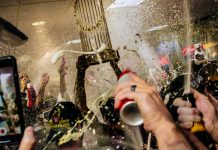 There’s No Spraying in Baseball This Year. Until the World Series. 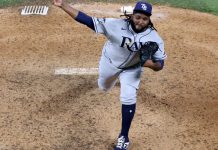 Rays Rely on a Bullpen With a Simple Aim: Throw It Over the Plate 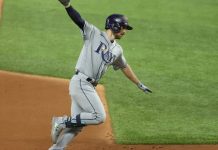 World Series: Rays Bounce Back With a Narrow Win Over the Dodgers 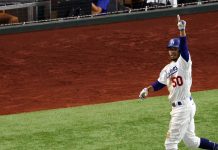 Mookie Betts Leads the Dodgers’ Stars With a Masterful Performance 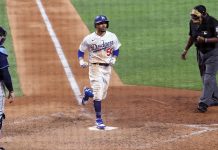 The Dodgers piled on the runs and seized control of the World Series. 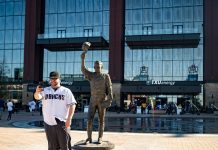