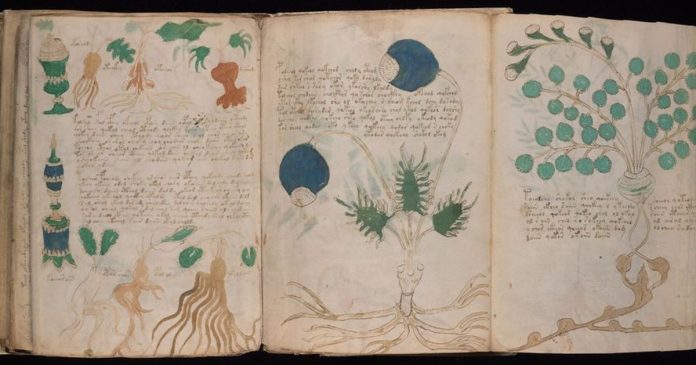 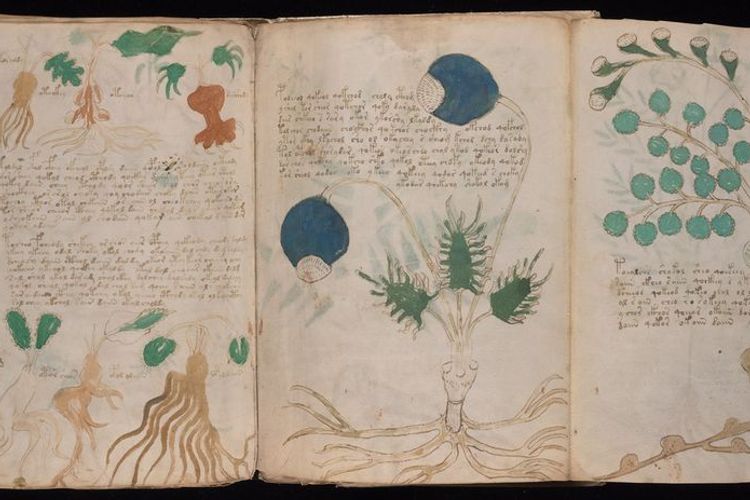 Held in the Beinecke Rare Book and Manuscript Library at Yale University, the Voynich Manuscript is often said to be one of the world’s most mysterious books. Filled with unreadable words in an invented script, and illustrated with plants, fantastic creatures, astronomical symbols and nude bathing women, it has intrigued researchers intent on unlocking its secrets for generations. Was the book created by Leonardo Da Vinci, who was known to write in a mirror code? Does it show plants from Mexico? Is it simply gibberish? All of these theories are unlikely, yet all three—and many more—have been argued over for years as people seek to crack the Voynich’s code.

What we can say is that across the manuscript’s 234 vellum pages, the content appears to be divided into various themes, from botany and biology, to astronomy and pharmaceutical drawings. And according to radiocarbon dating, it was created sometime in the first half of the 15th century—although nobody knows where. Computer analysis has also indicated that a real language is encoded within the Voynich symbols, with a Germanic dialect and proto-Romance among the possibilities raised. But in 2020, the German Egyptologist Rainer Hannig announced that he had cracked the code: the Voynich Manuscript’s language, he argues, is based on Hebrew.


Pages from the Copiale Cipher, decoded in 2011 using computer anaylsis, which turned out to be the work of an 18th-century German secret society called the Oculist Order

If Hannig has indeed broken the unbreakable code, the Voynich Manuscript will join the list of other centuries-old encoded books that have been cracked in recent years. Take, for example, The Copiale Cipher. Known from two copies in Germany, this once mysterious book consists of 105 pages of writing that mixes symbols with Greek and Roman letters. When the code was broken in 2011, in part through computer analysis, the book turned out to be the work of an 18th-century German secret society called the Oculist Order, and included details of their initiation ritual. (How predictable.)


Many scholars once regarded the Rohonc Codex as a hoax, but recent research suggests that meaning is hidden within its symbols

Still, from the weirdly coded tables of the 16th century Book of Soyga, once prized by Queen Elizabeth I’s court astronomer John Dee, to the obscure alchemy-inspired symbolism of The Ripley Scroll, produced in the same era, not every mysterious manuscript has revealed its secrets. Perhaps the most enigmatic manuscript after Voynich remains impenetrable: the Rohonc Codex. Little is known about this book before it was bequeathed to the Hungarian Academy of Sciences in 1838. Its 448 pages bear illustrations covering Biblical themes and an as yet unreadable text, written using around 150 different symbols. Like Voynich, there has been much speculation over what language, if any, is encoded—ranging from old Hungarian to Sanskrit, or even a specially invented one—as well as debate over the book’s origin and date of creation. Many scholars once regarded the book as a hoax, but recent research suggests that meaning is hidden within its symbols, and that it was probably made during the 16th or 17th century.

And remember, if you are looking for your next Voynich, not all mysterious manuscripts were created centuries ago. The 108-page notebook of the American artist James Hampton (1909-1964) is seemingly written in code and also remains unbroken. Hampton spent over a decade of his life secretly creating The Throne of the Third Heaven of the Nations’ Millennium General Assembly, now on display at the Smithsonian American Art Museum. He constructed this artwork in a garage in Washington, DC, where it was discovered after his death. His notebook, which bears the title St. James: The Book of the 7 Dispensation and includes hints of a “revelation” seems to reflect the religious inspiration behind Hampton’s work. If the code is actually solvable—there is always the possibility that it is a form of automatic writing or a language invented by Hampton—its content could provide a rare insight into the artist’s thoughts.

So, if the potential decoding of the Voynich Manuscript left you feeling like you have missed your chance to decipher strange tomes filled with mysterious imagery and unreadable texts, don’t worry, there are still plenty of options. As it turns out, many people in the past wanted to keep their writings secret.