Bodexpress romps in a Nov. 20 allowance at Gulfstream Park West

Top Racing, Global Thoroughbred and GDS Racing Stable’s Bodexpress will look to run off with Sunday’s $85,000 Alydar, a nine-furlong route restricted to 4-year-olds and upward yet to win a stake this year other than state-bred, at Saratoga Race Course.

Trained by Gustavo Delgado, the multiple graded-stakes placed Bodexpress was a late scratch before the start of the Grade 3 Monmouth Cup on July 18 at Monmouth Park. He then re-routed to the Alydar at his home base at the Spa under the care of the conditioner’s son and assistant trainer, Gustavo Delgado, Jr.

Bodexpress was also under consideration for last Saturday’s Grade 1, $750,000 Whitney, won by Improbable, and Delgado, Jr. expressed regret at not entering the colt in the compact, but talented, field of five.

“We were planning to enter him in the Whitney, and we were regretting not doing it because that race had no pace. They went [a quarter-mile] in 25, and almost 50 [to the half-mile],” said Delgado, Jr. “He probably would have been on the lead and not to say that he would have won it, but second or third in the Whitney would have been good.”

The 4-year-old Bodemeister bay has breezed twice on the Saratoga main track since scratching at Monmouth, including a five-eighths breeze in 1:02.66 Sunday under Hall of Famer Javier Castellano who has the call from post 5.

Bodexpress became an internet sensation after unseating Hall of Fame rider John Velazquez in last year’s Grade 1 Preakness before completing the course on his own accord. Delgado, Jr. said providing Castellano an opportunity to hop aboard the quirky colt in advance of Sunday was important.

“Last Sunday he breezed with Castellano on him, and he really liked him,” said Delgado, Jr. “He’s got more confidence in him now. It’s always good to get to know him first.”

Bodexpress has made three starts this season at Gulfstream, including a fifth in the Grade 1 Pegasus World Cup Invitational and a last-out third in the Grade 3 Hal’s Hope at nine furlongs.

Delgado, Jr. said the well-traveled Bodexpress is enjoying his time at the Spa.

Trained by Hall of Famer Steve Asmussen, the Kentucky homebred will make his return to the Spa off a third in the Grade 1 Hollywood Gold Cup on June 6 at Santa Anita, a 10-furlong event won by Improbable.

Ricardo Santana, Jr., who guided Tenfold to his most recent victory in the 2019 Grade 3 Pimlico Special, has the call from post six.

Godolphin homebred Endorsed, a 4-year-old Medaglia d’Oro colt, earned a career-best 100 Beyer Speed Figure two starts back when second to Code of Honor in the Grade 3 Westchester traveling a one-turn 1 1/16-miles on June 6 at Belmont.

Trained by Hall of Famer Bill Mott, Endorsed has shown good form at Saratoga where he graduated in a maiden sprint in August 2018 and last year added a second in the nine-furlong Curlin and rallying fourth in the 10-furlong Grade 1 Runhappy Travers.

Endorsed will be looking for his third win of the campaign following optional-claiming scores in January at Gulfstream for former trainer Kiaran McLaughlin and a half-length win at Oaklawn Park in May at first asking for Mott.

Joel Rosario, aboard for a last-out seventh in the Grade 1 Runhappy Met Mile on July 4 at Belmont, retains the mount from the inside post.

The Alydar is slated as Race 9 on Sunday’s 10-race card, which offers a first post of 1:10 p.m. Eastern. Sunday’s card will also feature a mandatory payout of the Empire 6. Saratoga Live will present daily television coverage of the 40-day summer meet on FOX Sports and MSG Networks. For the complete Saratoga Live broadcast schedule, and additional programming information, visit https://www.nyra.com/saratoga/racing/tv-schedule. 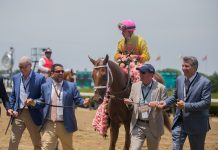