After winning 67 races last season at Indiana Grand, Fernando De La Cruz had planned to shift his winter base from Oaklawn Park, where he’d competed the last four years, to Fair Grounds.

But when younger brother Walter De La Cruz, also a jockey, suffered a concussion and a neck injury last fall, plans changed. With Walter out of action for an unspecified length of time, Fernando decided to return home to Tampa Bay Downs, where he excelled for seven seasons.

Fernando, 35, invited Walter to live with him and his family – wife Rosa and their children, Brian and Norma – at their Tampa home during his recuperation. Walter, who is single, hopes to return to action soon (“he is about 90-percent recovered,” Fernando said), but in the meantime, the unexpected family reunion is working to everyone’s benefit.

“Walter is enjoying time with the kids, taking them to the beach, the movie theater, Busch Gardens,” said Fernando, whose return to Oldsmar has resulted in him winning the Salt Rock Tavern Jockey of the Month award. “I ride horses to make a living, but family comes first, no matter what. He is excited to start riding again, and hopefully he will get a release from the doctor to start soon.”

Trainers, owners and fans have welcomed the return of Fernando, who has climbed to fourth in the Tampa Bay Downs standings with 20 winners, raising his career mark to 2,170. Included in that total are back-to-back victories in the Grade 2 Woodford Stakes Presented by Keeneland Select with Bucchero in 2017 and 2018.

“He fits a lot of my horses, and I’m happy to have him on my team at Tampa,” said trainer Anthony Granitz, who also employs De La Cruz at Indiana Grand.

De La Cruz and Granitz have combined for six victories at the meet, including today’s second race with Bellarific, a 5-year-old mare owned by Tri County Stables. “He can get a horse to rate and relax, and he’s a strong finisher,” Granitz said. “He rides the turf course well, he’s patient and he listens to my instructions. Fernando is a hard worker in the morning. He’s willing to get on any horse and work with you, and if he doesn’t like a horse he’ll tell me, which is important because horses are smart and they can sense that.”

At Indiana Grand, where he worked with agent Mike Moran last season for the first time, De La Cruz’s victory haul included four stakes races. On Sept. 8, he won both the $150,000 Indiana Grand Stakes with (then)-3-year-old filly Burning Ambition and the $150,000 Caesars Stakes with 3-year-old colt Royal Prince. Both were trained by Brad Cox, best known as the conditioner of Longines Breeders’ Cup Classic winner and presumptive 2021 Horse of the Year Knicks Go.

Moran, who also represents defending Oldsmar jockey champion Samy Camacho, said De La Cruz’s versatility is a big reason he is successful everywhere he goes. That trait was on display in his two victories Wednesday, when he won a 7-furlong sprint in gate-to-wire fashion on Himelstein and captured a maiden claiming race on the turf with a come-from-behind rally on Golden Rocket.

De La Cruz has won two meet titles at Indiana Grand and one at Hoosier Park, and is showing signs he could contend in Oldsmar.

“Fernando is always focused on riding and goes out and performs to the best of his ability every day,” Moran said. “He’s competitive, he likes to ride every race and he wants to contend for leading rider. He’s a hard worker who does whatever you ask him to do, and he’s a good family man.

“He’s the total package for a jockey.”

When De La Cruz returns to the jockeys’ room after a winning effort, he is uplifted by bettors and well-wishers who make him feel as though he never left.

“Thanks to God, they remember me. I’m healthy, I’m winning races and I’m competing against a lot of the same guys, so I can’t ask for more,” he said. “Tampa is home, and this is such a nice place to live and to ride horses.” 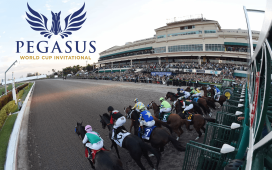 Grade 2 Winner Made You Look To Enter Stud In Argentina