Children and parents forcibly separated at the US-Mexican border under Donald Trump’s policy of “zero tolerance” are showing signs of severe psychological trauma and mental health disorders that have endured even after they were reunited, a new study has found.

Physicians for Human Rights (PHR) have released the first qualitative analysis to be carried out on the mental health effects of Trump’s highly contentious policy of enforced family separation which provoked outrage and condemnation around the world.

Between 2017 and 2018, the US government under Trump’s direction separated more than 5,000 children – the youngest just four months old – from their parents as an act of deterrence to other would-be asylum seekers fleeing violence and persecution in Central America. As of September, 1,677 children had yet to be reunited with their parents, including 381 children whose status and whereabouts were unknown.

In its groundbreaking new study, PHR brought together trained clinical experts including psychologists, psychiatrists and pediatricians to delve into the medical and legal documents of 31 of the children and parents subjected to family separation. The study group comprised asylum seekers from Honduras, Guatemala and El Salvador and included 19 parents and 12 children of whom the youngest was six at the time they were wrenched from their families.

The clinicians diagnosed all the individuals contained in the study group with at least one mental health condition arising from the suffering they faced fleeing their countries of origin combined with the devastating trauma of being torn apart from their families by US border agents. The most common conditions were post-traumatic stress disorder (PTSD), major depressive disorder and generalized anxiety.

The most shocking finding was that severe psychological distress continued in some cases long after parents and children had been brought back together. A Guatemalan girl aged six was suffering from PTSD a year after she had been reunited with her parents, while an eight-year-old boy displayed severe symptoms of PTSD and separation anxiety two years later.

The clinicians recorded a range of symptoms that frequently arise following traumatic experiences, including feelings of confusion and panic, depression, frequent crying, nightmares and other sleep problems, and loss of appetite. Among the children, several displayed regressive behaviour such as crying, clinging to parents or caregivers, incontinence and uncontrollable fear.

PHR said that the overall conclusion of its study was that US officials intentionally inflicted severe pain and suffering on Central American asylum seekers in order to punish and coerce them not to pursue asylum claims. The report said that the actions of US immigration agents amounted to torture and cruel and inhumane treatment as defined under international law.

“This analysis shows the trauma and agony endured by parents and children who were forcefully separated from one another, and the compounding toll that trauma takes on both mental and physical health, lingers with these individuals for weeks, months and years after they’ve been reunited,” said Ranit Mishori, PHR’s senior medical adviser and co-author of the study.

As one of his first moves as president, Joe Biden set up an interagency taskforce to oversee the reunification of families separated by his predecessor. The Biden administration is in talks over possible financial compensation to the families who were affected, though there has been some confusion over the scale of the payments.

PHR said that its study underlined the urgent need for mental health treatment for the parents and children. It called on the Biden administration to follow through on reparations, including a formal apology from the US government, a financial settlement and prosecution of the officials who executed the zero tolerance policy. 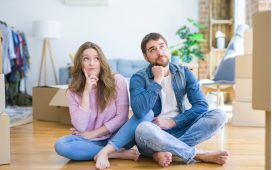 5 Things to Consider Before Relocating

DHS Announces Fee Exemptions, Streamlined Processing for Afghan Nationals as They Resettle in the U.S.

At the Ready: the Latino teens training to be border patrol agents