On an action-packed Saturday morning beneath the Twin Spires at Churchill Downs in Louisville, Ky., Godolphin’s undefeated champion colt Essential Quality continued his march to the $3 million Kentucky Derby presented by Woodford Reserve (Grade 1) with a swift five-furlong move in :59.60 early Saturday morning. Fellow Derby contenders Mandaloun (six furlongs, 1:11.40) and Soup and Sandwich (five furlongs, :59.80) also worked toward their start in the “Run for the Roses.”

Essential Quality, the recent winner of the $800,000 Blue Grass (G2) at Keeneland, worked at 5:15 a.m. (all times Eastern) with jockey Luis Saez aboard through splits of :12.80, :24.60 and :47.40. The gray Tapit colt began his work one length behind two-time winning stablemate Spa City and finished even at the wire. Spa City’s final five-furlong time was :59.80, according to Churchill Downs clocker John Nichols. Essential Quality galloped out six furlongs in 1:13.20 and completed seven furlongs in 1:28.60.

“I’m not taking a deep breath yet but we’re very pleased with where we are at today two weeks from the Derby,” trainer Brad Cox said. “He really had to work for that win in the Blue Grass and we were very pleased how well he ended up bouncing out of it.” 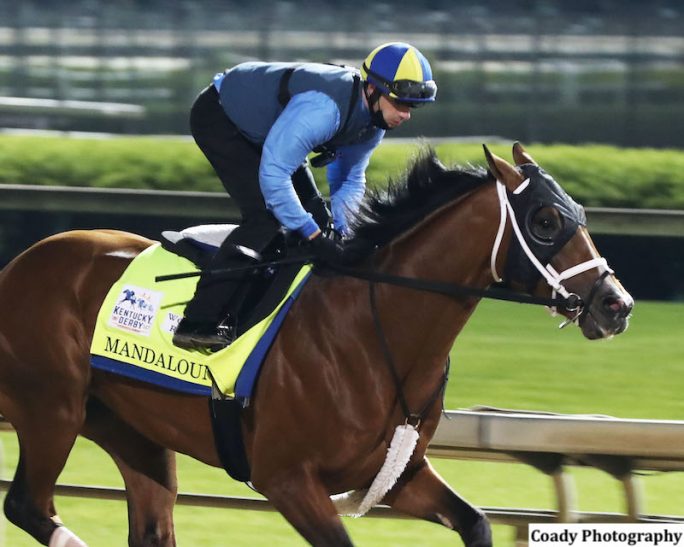 Following Essential Quality’s move, Juddmonte Farm’s Mandaloun worked with jockey Florent Geroux aboard in company with maiden winner Colonel Bowman. The duo began their six-furlong move from the five-eighths pole through splits of :12.40, :24.20, :35.60 and :58.80. Mandaloun continued to extend his stride in front of Colonel Bowman through a seven-furlong gallop out in 1:25.20 and completed one-mile in 1:41.60. Colonel Bowman’s final six-furlong time was 1:11.80.

“(Mandaloun) worked great,” Cox said. “We were all puzzled after the Louisiana Derby (G2) but he’s been doing great since that race maybe that was just a head scratcher. He’s a really good-looking son of Into Mischief and we know he’s better than what we saw in his last start.”

At 7:30 a.m., Live Oak Plantation’s homebred Soup and Sandwich cruised five furlongs with jockey Tyler Gaffalione on board. The once-beaten son of Into Mischief worked in company with four-time winner Epic Dreamer through opening fractions of :12.40, :24.20 and :35.20. Soup and Sandwich began drawing clear of his workmate at the wire and galloped out strongly in front with a six-furlong time of 1:12.40 and completed seven furlongs in 1:25.20.

“This horse is just starting to figure things around the racetrack,” trainer Mark Casse’s assistant David Carroll said. “Tyler was in cruise control around there and that gallop out was great.” 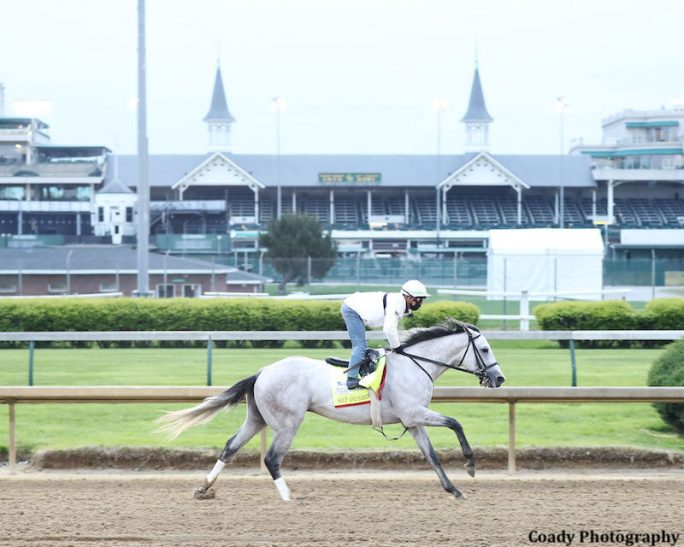 Soup and Sandwich working under the Twin Spires

Fellow Oaks contender Ava’s Grace, the runner-up in the $600,000 Fantasy (G3) behind Pauline’s Pearl, worked a half-mile in :48.60 at 5:15 a.m. with jockey Adam Beschizza up. Owned by Cypress Creek Equine and trained by Robertino Diodoro, Ava’s Grace has yet to finish off the board four starts with one win, one second and two third-place finishes.

DERBY NEWS AND NOTES – Six-time Kentucky Derby-winning trainer Bob Baffert reported via text Saturday morning that Gary and Mary West’s Concert Tour, third while beaten 2 ½ lengths as the favorite in the April 10 Arkansas Derby (G1), would bypass the May 1 Kentucky Derby. Text: “Concert out. Wait for Preakness.” … Three horses remain listed as “possible” starters in the Derby: Caddo River for trainer Brad Cox and either Highly Motivated or Crowded Trade for trainer Chad Brown. If Brown only runs one as expected that would put American Pharoah (G1) winner and Arkansas Derby fourth Get Her Number into the field and Lexington Stakes (G3) winner King Fury at No. 21 awaiting the Caddo River decision. … Cox reported that Arkansas Derby (G1) runner-up Caddo River is continuing to train towards a start in the Kentucky Derby but would talk the race over with owner John Ed Anthony and make the decision in the next week. … Klaravich Stable’s Blue Grass runner-up Highly Motivated galloped Saturday at Keeneland and is scheduled to work on Sunday. The colt is tentatively scheduled to arrive at Churchill Downs on Monday. … M Racing Group’s Like the King worked six furlongs in 1:12.80 at Keeneland for trainer Wesley Ward. The Jeff Ruby Steaks (G3) winner is scheduled to arrive Derby Week to Churchill Downs.

Dying Wish Fulfilled, Racing Fan Will Be Laid To Rest

Whether In Kentucky Or Oklahoma, Winfrey Always At Wolf Creek Farm

Diet And Exercise Key To Managing Tying Up From PSSM