England vs New Zealand LIVE: Cricket score and updates from second Test with Jonny Bairstow in 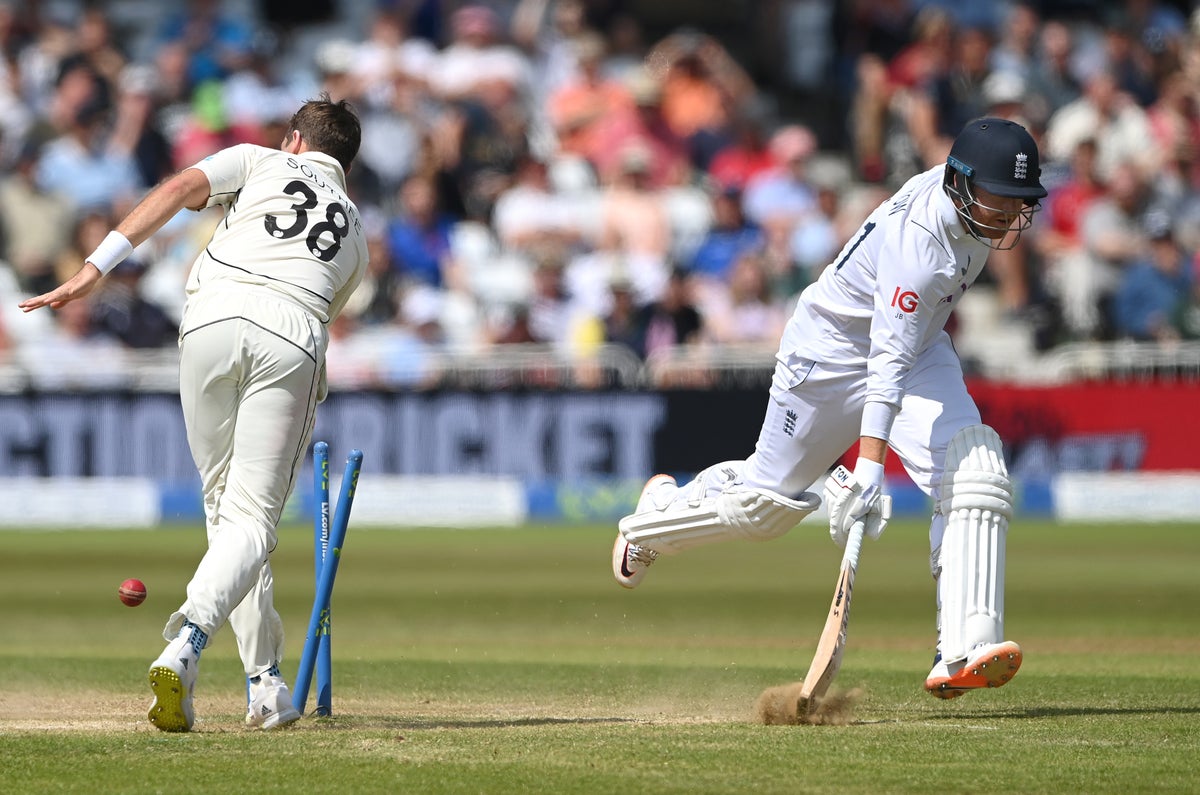 England and New Zealand are set for a thrilling conclusion to the second Test at Trent Bridge.

Captain Ben Stokes was made to regret his decision to insert the tourists on a flat pitch in Nottingham with Daryl Mitchell (190) and Tom Blundell (106) again thorns in England’s side as New Zealand piled up 553 in their first innings. England responded in kind, however, with a second Test ton from Ollie Pope – and a first batting at number three – followed by the now habitual century from former skipper Joe Root (176) earned the hosts parity. With a draw the most likely result, England’s bowlers stepped up on day four and a flurry of late wickets late in the day have set up a dramatic denouement with one day’s play remaining.

England picked off the three wickets they needed on Tuesday morning but Trent Boult’s flurry of late runs meant England needed 299 runs to win the Test match. The chase is on.

Follow all the latest live coverage of today’s match in the live blog below:

The afternoon session was a cracker but probably edged England’s way thanks to the partnership between Jonny Bairstow (43*) and Ben Stokes (25*).

There were a couple of big moments for New Zealand, Matt Henry had Ollie Pope caught behind before Trent Boult dismissed Joe Root for just three.

Alex Lees (44) looked set for a long innings but he dangled his bat wide of the stumps a nicked off to give Tim Southee his first wicket of the match and England looked in trouble at 93-4.

Stokes and Bairstow have steadied the ship though and will look to launch another counter-attack after tea with England needing 160 runs to win.

Jonny Bairstow (43*) is into the forties and is closing in on a well earned half century. He was under a little bit of pressure coming into this innings but he’s played nicely, looked busy and put away the loose ball.

Trent Boult continues to mix up his lengths bowling at Ben Stokes. A bouncer follows a yorker before another one is fired in at Stokes’ toes and he slams the bat down to keep it out.

Just one run off the over and England head into tea needing 160 runs to win. New Zealand need six wickets.

Ben Stokes finishes off Henry’s over with a two before slapping a flat-batted shot straight down the ground for four.

Matt Henry returns for dart just before tea. He took the wicket of Ollie Pope earlier in the day and will have his sights set on the right-handed Jonny Bairstow.

Bairstow works the ball away for a single before Henry strikes Stokes on the pads.

There’s an appeal from the New Zealanders but the umpire says ‘not out’.

Tom Latham goes upstairs for a look but the ball pitched outside leg stump and the visitors lose a review.

A change in the bowling almost brings a wicket for New Zealand! Trent Boult returns and come round the wicket to Jonny Bairstow. The ball just holds off the pitch and Bairstow hangs his bat well outside the off stump. He gets a thick outside edge that flies wide of slip and goes to the boundary.

Bairstow then lifts a drive wide of the fielder at cover and collects two more.

A dab into square leg brings Ben Stokes back on strike and he pulls Boult away for another single. Bairstow finishes the over off with a square drive for one.

Another fine over for England.

One of Bracewell’s key attributes is his ability to get overspin on the ball. That means there’s more bounce and it makes cross batted shots square of the wicket difficult to play.

Stokes warily sees off the first four balls of the over picking up just a single.

Bairstow guides one down to third man for another run before Bracewell drops his final delivery short and Stokes rocks onto the back foot and plunders it over to the deep mid-wicket boundary for four!

Southee continues and Bairstow cuts him away to the deep point boundary for four more runs. The New Zealand pacer strays too straight and Bairstow flicks him into the leg-side for a couple.

The runs continue to flow for England.

Ben Stokes is on the charge! Jonny Bairstow takes a single off the first ball of Michael Bracewell’s next over to get Stokes back on strike.

Twice Stokes drops to one knee and whips a reverse sweep to the boundary to pick up another two fours off the spinner. A good over for England with nine coming from it.

The England captain is up to 15 now.

Six! Ben Stokes shuffles down the crease and charges at Tim Southee before launching the New Zealander back over his head for a maximum. He brings up England’s hundred with that shot as well.

Southee responds with a decent delivery. Angled in from around the wicket and just holding it’s line before sneaking past Stokes’ outside edge. There are a few sighs from the slip cordon as that one comes through. It was very close.

Ben Stokes is off the mark. Jonny Bairstow picks up a single with a guided cut through point off the spinner before Stokes knocks one gently down the ground to collect his first run.

Two taken off the over for England. The captain is taking his time to get into his innings.