Emma Raducanu plea made by Andy Murray ahead of Wimbledon return


Andy Murray has called on the media to let Emma Raducanu “be who she is” as the 19-year-old prepares for her homecoming at Wimbledon. The Bromley local made her Grand Slam debut as a wildcard at the tournament a year ago, storming into the second week, before becoming the first qualifier to win a Major title at the US Open weeks later.

Raducanu is preparing for her first Wimbledon since becoming a top 15 player and Grand Slam champion. The teenager has already sparked injury concern with a spate of issues and niggles in the last few months, including at the recent Nottingham Open, but looks set to be fit for a return to the All England Club.

In the midst of her first British grass court season since her unprecedented US Open win, Murray has issued a plea after sharing his own experiences of being judged early in his career. “I think there needs to be a level of trust and respect between the player and the media,” he told Matt Graveling.

“I also had problems early in my career where maybe certain things that I said got taken out of context or jokes that I might have made turned into big stories and big headlines where it turned things a bit sour and negative.” Defending the 19-year-old, he added: “Just let her be who she is, and you know, she might say some things that are a joke or that she maybe doesn’t mean or whatever.”

JUST IN: Harriet Dart on ending ‘toxic relationship’ and improving her form 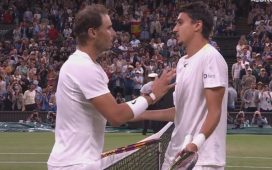