The Nov. 2 episode of ‘DWTS’ featured a heartbreaking elimination after the remaining couples danced two dances for the first time. Plus, Jeannie Mai sent ‘DWTS’ fans a message from her hospital bed.

The Nov. 2 episode of Dancing With the Stars is going to be a game-changing episode. The remaining pairs are dancing two dances this week, one of which is a relay dance with other pairs. There will also only be a single elimination since Jeannie Mai was forced to leave the competition after undergoing emergency surgery.

Kaitlyn Bristowe and Artem Chigvintsev are first up with a jive to “Don’t Stop Me Now” by Queen. Derek Hough raves over how “jam-packed” the routine was and thinks Kaitlyn can go “all the way.” He just thinks she can be a “little sharper.” Bruno Tonioli also believes Kaitlyn has “everything” to win this competition, but he wants to see “more passion, more attack.” Carrie Ann Inaba, who gave Kaitlyn some tough criticism last week, says Kaitlyn returned with “grace and energy.” Kaitlyn and Artem’s scores: Carrie Ann = 8; Derek = 9; and Bruno = 8. Total score = 25 out of 30.

Nev Schulman and Jenna Johnson are coming off a perfect score from last week. They dance the Viennese Waltz to “Stuck with U” by Ariana Grande and Justin Bieber. Bruno gushes that Nev was “oozing charm and charisma.” Carrie Ann says it was a “beautiful” dance but noticed Nev stumbled at one point. Derek loves that Nev moves with such “intention” and calls the performance a “beautiful, smooth Viennese Waltz.” Nev and Jenna’s scores: Carrie Ann = 9; Derek = 9; and Bruno = 9. Total score = 27 out of 30.

Justina Machado and Sasha Farber hit the ballroom with a samba to “Magalenha” by Sergio Mendes. She dedicates her dance to the iconic Rita Moreno, her beloved One Day At A Time co-star. Carrie Ann raves over Justina’s “great energy.” She points out a stumble but barely even noticed it. Derek says Justina is “so fun to watch” but tells her to watch her feet. Bruno loves watching Justina and declares she gives the “full monty every time!” Justina and Sasha’s scores: Carrie Ann = 9; Derek = 9; and Bruno = 9. Total score = 27 out of 30.

Nelly and Daniella Karagach dance the rumba to “Nobody Knows” by The Tony Rich Project. He dedicates his dance to his beloved sister, who passed away from cancer. Bruno wants to see more hip action in a rumba, but he appreciates Nelly’s performance. Carrie is “proud” of how far Nelly’s come, but she wants to see more from him. However, at the end of the day, she notes that he always dances from his heart. Nelly and Daniella’s scores: Carrie Ann = 7; Derek = 7; and Bruno = 7. Total score = 21 out of 30.

Chrishell Stause and Gleb Savchenko dance a sexy Viennese Waltz to “Love On The Brain” by Rihanna. Carrie Ann thinks the performance was graceful, elegant, and sexy. She just points out to Chrishell to relax her neck a bit and work on her footwork. Derek notes that Chrishell is “improving each week” and adds that she needs to work on her transitions. Bruno says there’s room for improvement but wants to see “more” of what he just saw. Chrishell and Gleb’s scores: Carrie Ann = 8; Derek = 8; and Bruno = 8. Total score = 24 out of 30.

Skai Jackson and Alan Bersten dance a fierce salsa to “Work It” by Missy Elliott. Skai really brings it in this performance, and Alan incorporates so many insane lifts into the dance. Carrie Ann says Skai did a “nice job,” and while she doesn’t love lifts, they are allowed in the salsa. However, she thinks Skai didn’t quite land all of them. Derek loves tricks but thinks there was one trick too many. But overall, it was a “great dance.” Skai and Alan’s scores: Carrie Ann = 8; Derek = 9; and Bruno = 8. Total score = 25 out of 30.

Johnny Weir and Britt Stewart dance a gorgeous foxtrot to “Wonder” by Shawn Mendes. Derek raves over Johnny’s “beautiful arms” during the performance. Bruno notes that Johnny has such a “wonderful sweeping movement” when he dances. Carrie Ann gushes over Johnny and Britt’s “interesting, artistic choice.” Johnny and Britt’s scores: Carrie Ann = 9; Derek = 9; and Bruno = 9. Total score = 27 out of 30.

From her hospital room, Jeannie says she is “absolutely devastated” that her DWTS journey has to end this way. She explains that doctors discovered a “throat abscess” that led to her tonsils and throat getting infected. She had to have emergency surgery. The doctor tells Jeannie that if she had waited “one more day” her throat would have “closed up.” Jeannie tears up in her video and says this has been “hands down one of the best journeys of my life.”

Now it’s time for the relay dance. The couples in each group dance a specific style and will be judged by a single judge. Carrie Ann is judging the cha-cha. The group includes Nev and Jenna, Chrishell and Gleb, and Nelly and Daniella. Carrie Ann can award 1, 2, and 3 points to her group. Nev and Jenna get 3 points, Chrishell and Gleb get 2 points, while Nelly and Daniella get 1 point. 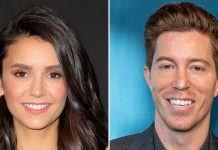 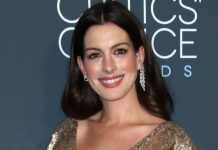 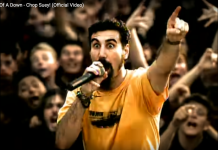 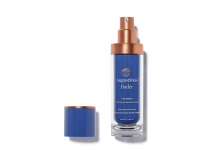 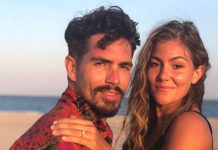 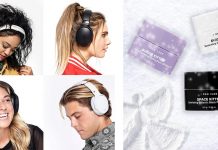 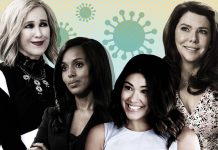 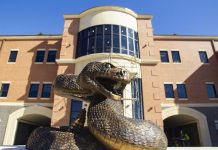