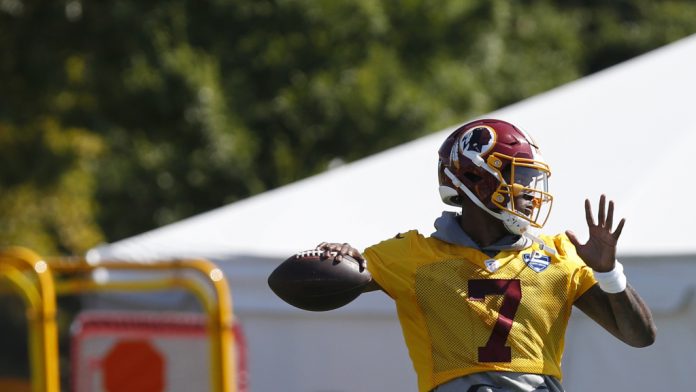 Are you looking for some video that will get your weekend into a nice groove? Look no further than the clip above if you’re a fan of the Washington Redskins.

It may just depict quarterback Dwayne Haskins firing a bullet to wide receiver Steven Sims in a workout session, but it acts as a precursor to what may be to come in the future with this team. Not only does Haskins look to be in great shape — we saw evidence a few weeks ago that he had dropped significant weight and body-fat percentage — but he rifled a ball to Sims, who was on a vertical route up the seam, catching the ball in stride.

Both players may not have been where they wanted to be early on in the 2019 season, but as the year stretched on, each of the rookies was able to find a stride and put up some decent numbers along the way. Going into the 2020 season, it’s going to be exciting to see just what they have in store for Redskins nation.

[Washington Post] – A Redskins name change could happen soon. But the process might drag on for a while.

[NBC Sports Washington] – Walmart and Target have now pulled Redskins gear from their websites, too