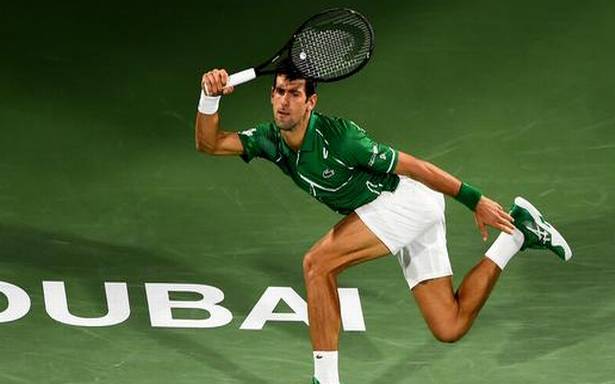 World number one Novak Djokovic saved three match points to beat France’s Gael Monfils 2-6 7-6(8) 6-1 on Friday as he set up a final showdown at the Dubai Open with Greek second seed Stefanos Tsitsipas.

Djokovic is yet to lose this year and the Australian Open champion extended his unbeaten run in 2020 to 17 matches with what was also his 17th win over Monfils.

“It was truly an escape, he was clearly the better player for two sets,” Djokovic said in the post-match interview.

“I was fortunate to work my way back in the second set. Gael is playing as well as he has played ever, I’ve played him many times. I know I have a good defence but what he did today for two sets was unbelievable.”

A double break in the opening set gave Monfils an early advantage as Djokovic dropped his first set of the tournament, failing to find answers when faced with Monfils’ long reach and well-angled returns.

Djokovic’s drop shots that had held him in good stead in the tournament also proved to be ineffective against the athletic Monfils, who was up to the task of lengthening rallies to prevent the Serb from controlling points.

Djokovic finished with 17 unforced errors in the first set and his frustrations only mounted when he was broken at 1-1 in the second, with the 32-year-old screaming in the direction of his team while the crowd roared its approval for Monfils.

But Djokovic had his share of fans in the crowd too and they egged him on to restore parity as he converted his first break point to make it 3-3. However, a visibly tiring Monfils still held on to save five set points to take it to a tiebreak.

Monfils was doubled over between every point at this stage but the Frenchman then got a second wind in the tiebreak to go 6-3 up, before squandering three match points. Djokovic then benefited from a double fault to convert his eighth set point.

Fatigue set in for Monfils in the third as Djokovic won 12 points in a row to take a 4-1 lead and a medical timeout did little to alleviate his suffering as the top seed converted his first match point to clinch the contest.

In the other semifinal, Tsitsipas beat Briton Dan Evans 6-2 6-3 to advance to his second final in a week.

The Greek won the Marseille Open on Sunday.