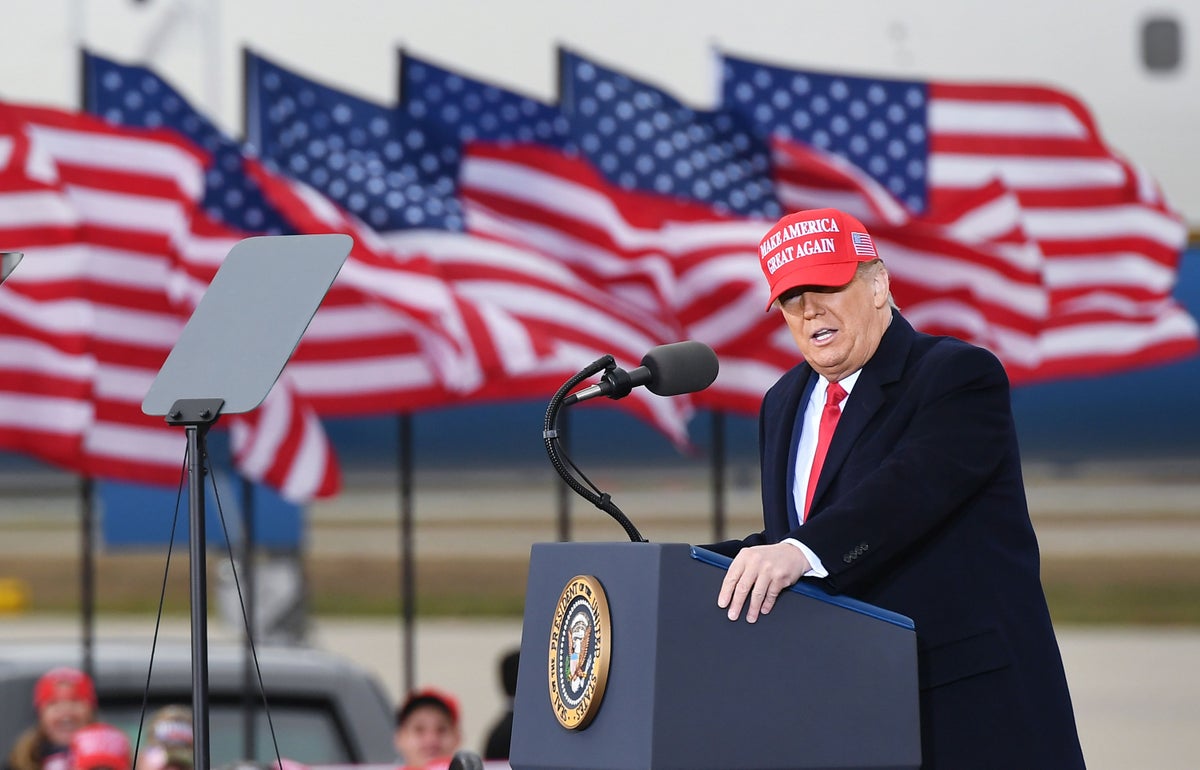 Donald Trump and other top Republicans continue to question the seriousness of the foiled right-wing plot to kidnap Michigan Governor Gretchen Whitmer in October 2020, even as two more people were found guilty for their roles in the scheme.

On Tuesday, a federal court found Adam Fox and Barry Croft, Jr., guilty of plotting to kidnap the Democratic governor and blow up a bridge, part of what prosecutors said was an attempt to kick off a second US civil war.

On Truth Social, the social network founded by the former president, Mr Trump continued his long-running feud with Ms Whitmer, sharing an article that suggested the FBI “instigated, encouraged and facilitated” the scheme to kidnap the governor at her vacation home in northern Michigan, rather than the more than a dozen men arrested on state and federal charges in the plot.

Mr Trump, who has voiced support for Tudor Dixon, the governor’s opponent in her upcoming re-election race, has dismissed the notion Ms Whitmer was ever in danger.

“The sting that they did involving Gretchen Whitmer was fake, just like those who instigated January 6,” Mr Trump said in a speech at the CPAC convention this month. “It was a fake deal, fake. It was a fake deal.”

“Gretchen Whitmer was in less danger than the people sitting in this room right now it seems to me,” Mr Trump added.

The former president has spent years attacking the seriousness of the plot against Ms Whitmer, and his allies in the state continue to pursue a quixotic investigation of Mr Trump’s bogus claims that the 2020 election was rigged.

At a rally in October 2020, shortly after the plot was revealed, Mr Trump wondered aloud whether the kidnapping plan was real, while also giving himself credit for stopping it.

In the months before the plot, Mr Trump had urged his supporters too “Liberate Michigan!”, after heavily armed, militia-style protesters demonstrated against Ms Whitmer’s pandemic policies.

The Michigan governor has been highly critical of the former president, arguing that his aggressive rhetoric has inspired political violence by hate groups, particularly against women leaders.

“Hate groups heard the president’s words not as a rebuke, but as a rallying cry,” Ms Whitmer said in a speech just after the kidnapping plot was foiled, pointing to the then-president’s refusal to condemn hate groups during a previous presidential debate. “When our leaders speak, their words matter. They carry weight. When our leaders meet, encourage or fraternize with domestic terrorists, they legitimize their actions and they are complicit. When they stoke and contribute to hate speech, they are complicit.”

“Every time the president ramps up this violent rhetoric, every time he fires up Twitter to launch another broadside against me, my family and I see a surge of vicious attacks sent our way,” she added in an article in The Atlantic not long after. “This is no coincidence, and the President knows it. He is sowing division and putting leaders, especially women leaders, at risk. And all because he thinks it will help his reelection.”

Following the former president’s lead, other Republicans have criticised the investigation into the kidnapping plot, believing that it, along with the recent FBI search of Donald Trump’s Mar-a-Lago club in Florida, is part of a pattern of the agency, led by a Trump appointee, going after the GOP.

“The same FBI that cooked up a plot to kidnap governors before an election just raided Biden’s most likely challenger,” Republican representative Dan Bishop of North Carolina tweeted this month. “Democrats are cheering on the weaponization of law enforcement against political opponents. They don’t care about ‘democracy’: just crushing their enemies.”

In April, Georgia congresswoman Marjorie Taylor Greene and 11 other GOP lawmakers sent a letter to Attorney General Merrick Garland criticising the FBI investigation of the kidnapping plot as entrapment.

“The American people deserve a transparent justice system and law enforcement that keeps them safe, not entraps them in serious criminal activity in order to sway the outcome of a democratic election,” their letter, first reported by Fox News, read.

At the time the kidnapping plot was revealed, Republican lawmakers in Michigan went after Ms Whitmer, arguing she was hypocritical for criticising Donald Trump and calling for toned down partisanship at the same time.

“It’s time to tone down the partisan rhetoric and turn the heat down as you’ve said. Will you do the same for President Trump?” Lee Chatfield, then the Republican speaker of the Michigan House of Representatives, wrote in a letter to the governor in 2020. “You’ve arguably been his biggest critic this year in the country. You even fundraised this week off this plot, now making it political, which is sad.”

“A lot of people are angry with the governor, and they want her arrested. So are they trying to arrest or was it a kidnap attempt?” he said in 2020.

Mr Leaf, a critic of the governor’s pandemic policies, who made headlines for refusing to enforce her Covid rules, once shared a stage in May 2020 with one of the suspects in the kidnapping plot.