A friendly dog who delighted train passengers in Ireland has been reunited with his owner after a brief railway adventure.

Kapsel was generally well behaved but could not but keep his paws off the table in his excitement during the unlikely journey from Newbridge to Heuston, Dublin, on Tuesday afternoon.

During his free ride, he had a good look at Straffen, posed for pictures on board and made some new friends.

Brian Lloyd, a film journalist, branded the pet ‘such a lovely dog’, explaining that he was ‘so friendly and nice to everyone on the train’.

He tweeted pictures of Kapsel and said:  ‘Anyone missing a dog in Newbridge? This chap hopped on the train to Heuston about 10 minutes ago.

‘Friendly dog, takes a pet like no problem. Has a collar but no name or details on it!’

Following the roughly 30 minute journey, during which Brian pictured Kapsel staring at Straffan, he added: ‘Staff at Heuston are looking after him, if anyone recognises him. I hope he enjoyed his little trip.’

Twitter user ‘Pkokuu’, who appears to be the dog’s owner, said: ‘Kapsel is back home now, massive thanks to everyone who took care of him on his little adventure.

‘I’m really glad he was in safe hands, he’ll be getting a GPS tracker and a tag with my number’

They added that Kapsel is Polish for ‘bottle cap’ – an item they collect, which is why the name stuck.

Pkokuu also thanked Irish Rail for looking after their new friend during his solo travelling experience.

But the company appear to be well practiced in doing so, mentioning that Kapsel was ‘another’ dog who likes to take the train from Newbridge.

And Twitter user Angela Gallagher suggested he was the third in the area ‘in recent times’ to have hopped on board for a free ride. 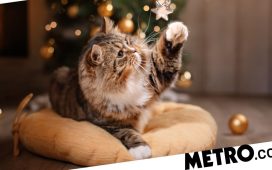 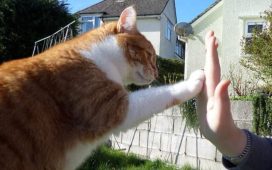 Cat owners to be obliged by law to have pets microchipped