More than a decade after Brittany Murphy died, director Cynthia Hill wants to give the actor a chance to “be something other than her death.”

“We’re doing a lot of looking back to reevaluate missteps and to be able to talk about people like Britney Spears and Brittany Murphy, who have been victimized by Hollywood, by the gossip industry,” Hill tells Variety. “Having to look back at what our role is in all of that [is] giving these women an opportunity to reclaim their voices.”

Working with Blumhouse Television and Pyramid Productions, Hill spent the last year creating a two-part docuseries about the circumstances that led to Murphy’s death on Dec. 20, 2009, at age 32. “What Happened, Brittany Murphy?” bows Oct. 14 on HBO Max.

The series opens with the emotional 911 call from Murphy’s mother, Sharon Murphy, declaring that her daughter is unresponsive. Over the next four hours, Hill goes backward and forward in time to paint a picture of Murphy from her youngest years as an aspiring actor in New Jersey to her big break in “Clueless” and her rise to fame. “What Happened” also covers her relationship with husband Simon Monjack and how that affected both her personal life and her career. The docuseries also dives into Monjack’s past, including a former romantic partner, and explores his relationship with Sharon Murphy.

The appeal of Murphy’s story for an audience member, especially one active on social media, is obvious: She was a talented actor struck down in her prime. Because her death was so unexpected, and in the end ruled to be caused by something seemingly easily treatable (a combination of pneumonia, anemia and drug intoxication), fans and internet sleuths cried foul play. When Monjack died of pneumonia and anemia just months after Murphy, those cries turned to conspiracy theories. Many still run rampant on YouTube today.

All of that fed into the appeal for Hill to taking on Brittany Murphy’s story. “People cannot let this go. People are so fascinated by it, including me. I do think that it says a lot about where we are right now,” she says.

In addition to featuring interviews with Murphy’s friends and collaborators, such as “Clueless” director Amy Heckering and “King of the Hill” co-star Kathy Najimy, and journalists who reported on Murphy’s life and death, Hill includes clips from YouTubers in the docuseries.

Hill wanted the docuseries to explore Murphy’s talent, but also her open spirit and trusting nature, which she believes ultimately allowed Monjack into her life in the first place and arguably allowed him to control her life once he was there.

“One of her former managers told me that she’d never met anyone like her and that they would go on auditions and it would be a role she really wanted and someone else would get it, and so she would have to tell Brittany, ‘You didn’t get the role, so and so got it.’ And Brittany would always say, ‘Oh, she’s so perfect for that role. Oh my gosh, that’s so great; I’m so happy for her.’ When most of us, I think probably any of us, would think about ourselves first. And she just didn’t,” Hill says.

The documentary alleges that Monjack fed her insecurities about her body and what she thought a leading lady had to look like, leading to rumors about plastic surgery, anorexia and drug abuse. It also recounts stories from those who worked with her but had no direct access to her and instead had to do everything through him.

“Alex Merkin, who directed her in ‘Across the Hall,’ he said that he would create this chaos so that he could come in and pluck her and save her from the chaos. And so, he had her convinced that he was doing right by her and that he was her savior, and in fact it was quite the opposite,” Hill says. “On that last job [‘The Caller,’ from which she was fired], I still haven’t gotten a very clear picture, but he was, I think, in an altercation with somebody on that movie. He just made it impossible for her to work. She was already struggling, and he just made it impossible for her. She didn’t know it.”

Since Murphy is no longer here to speak for herself, Hill uses archival video of her as a child, as well as clips from her movies — from “Clueless” to “Girl, Interrupted” to “Uptown Girls” — to punctuate key points in her biography.

“We didn’t have interviews with her. When you start looking at the archives, we have EPKs, red carpets [and] none of that is intimate or personal,” Hill says. “Our team started watching these movies, and it just was interesting to see how [with] her movie roles, there was some poignant moments where there were parallels and it just really made sense to try to give her voice that way and to let her have a moment to speak for herself. I don’t know if that’s really how she felt, but it did give us at least something to work with.”

The archival footage of Murphy as a child came from “connections we made in New Jersey,” Hill notes, rather than Murphy’s family. Hill says Sharon Murphy was “the first person on my interview ‘want’ list,” but despite attempts to reach her via phone, letters and a private investigator “to make sure that she received our letter,” Sharon Murphy “never officially responded to us.”

“I did get confirmation from someone else that she had received it,” Hill says about the letter.

On the flip side, when Monjack’s mother and brother heard about this docuseries, they reached out and ended up sitting down for a joint interview.

“I’m so grateful that they were willing to to participate,” Hill says. “I thought that it was really meaningful to understand him a little bit better and to try to unpack him more.”

Although this project came to Hill as a true-crime doc, she doesn’t want viewers to look at it solely through that lens.

“The first thing is that you have to believe her autopsy if you believe in science,” she says. “I don’t think that [Simon] murdered — and I’m throwing air quotes around it — Brittany. But I do think that he bears a good deal of responsibility in her demise and death because of the things that he didn’t do. Also, I think from all the isolating her from other people, it was like this perfect storm.”

“It is absolutely a cautionary tale that if you see someone in this kind of place in their life, it’s this power and control situation. Somebody comes in — and it’s not so different than really just Hollywood in general — but you’ve got this individual that comes in and literally takes her away from everybody,” she continues. “You think there’s going to be time, you think that there’s going to be an opportunity for her to have a comeback — for this relationship to end where she’s going to wake up and she’s going to see that he is this con man, and she’s going to get out of this. And I think that the folks that were closest to her — some on camera, some not on camera in this doc — still [have] a good bit of regret about not doing more to help, but you just don’t know how to help.” 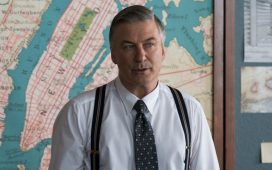 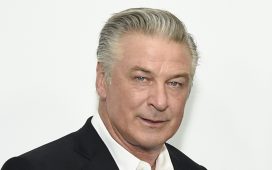 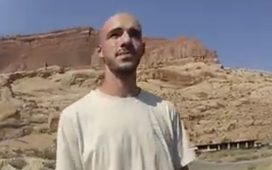 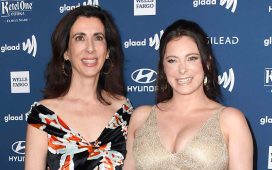 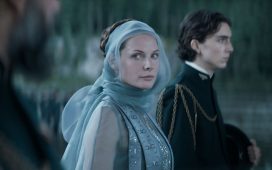