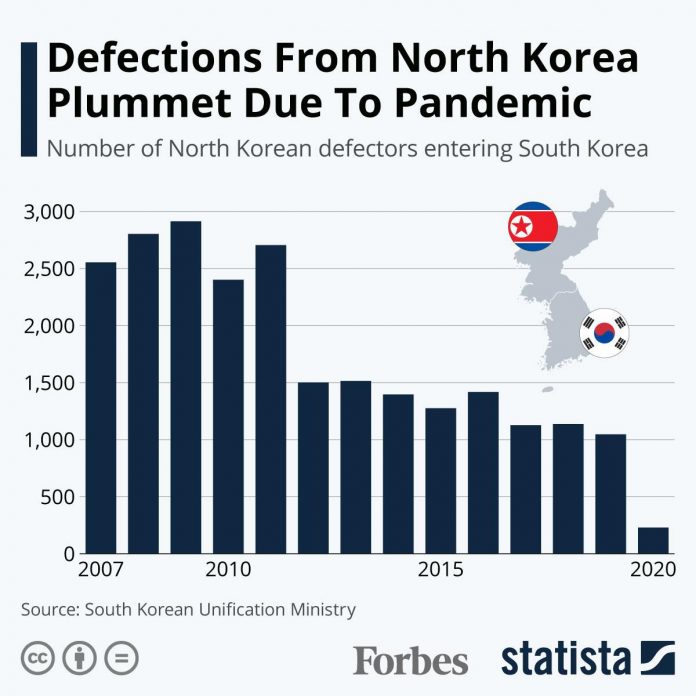 On Wednesday, South Korea’s Unification Ministry announced that the number of North Korean defectors arriving in the south has collapsed, primarily due to Pyongyang tightening its border security amid the Covid-19 pandemic. North Korea still has not confirmed a single case of Covid-19, a claim experts consider spurious, and shoot-to-kill orders have reportedly been issued in all border areas to prevent any possible transmission. Attempts to directly cross the heavily fortified Demilitarized Zone are rare and most defectors first go to China before making an attempt to enter South Korea via a third country, a journey that often takes years. Last year, Seoul also introduced restrictions on travel from third countries due to Covid-19 which also impacted defections.

The number of North Koreans fleeing the hermit country grew steadily during the famine of the late 1990s but escaping has become increasingly difficult since Kim Jong-un came to power. In recent years, border patrols have become more frequent, inspections have been increased and new electrified fences have been erected, making defections far more hazardous. In 2009, 2,914 North Koreans managed to make it to the South and by 2019, the number fell to 1,047 amid Kim Jong-un’s clampdown. The extra security measures introduced during the pandemic saw the figure fall to just 229 in 2020 and nearly all of those defectors had already been in China prior to their journey south.

As in previous years, the majority of North Koreans entering the South in 2020 were women, 68.6%. The pattern is attributed to women being more likely to suffer financial hardships as a result of being employed in the service sector while men tend to serve in the military. When men do leave, the reasons tend to be more varied and include everything from political and ideological feelings to pressure from the authorities. Currently, around 33,700 North Korean defectors are registered with Seoul’s Unification Ministry.

Those that make it to South Korea safely are interrogated to ensure they are not a security risk before being sent to a special government resettlement center where they undertake a 12-week social adaptation course that primarily focuses on politics, the economy and job training. After three months, they receive government benefits such as resettlement assistance, unemployment benefits and health insurance. Despite South Korea’s efforts to support and integrate North Korean defectors, many fail to get over the psychological trauma of their experiences and end up suffering from long term mental health problems.