Mandaloun wins an allowance race at Churchill Downs on Nov. 28

Catch him if you can. From New Orleans to Hot Springs to Boynton Beach, trainer Brad Cox is logging plenty of frequent flier miles this winter while overseeing a stable that has him in contention to not only win him his first career Eclipse Award as Outstanding Trainer, but raise the bar even higher in 2021.

Front and center at Fair Grounds where he is the four-time defending training champion, Cox has Mandaloun and Divine Comedy pointing to a pair of stakes on the Jan. 16 “Road to the Derby Kickoff Day,” for what he hopes will be the start of the path to the April 30 Longines Kentucky Oaks (G1) and May 1 Kentucky Derby presented by Woodford Reserve (G1) later this spring at Churchill Downs.

Both Juddmonte Farms Inc.’s homebred Mandaloun and Godolphin LLC’s homebred Divine Comedy figure to be among the favorites in their respective races on the 16th, with the former headlining the $200,000 Lecomte (G3) and the latter starring in the $150,000 Silverbulletday. Both races are important 10-4-2-1 points races for the Derby and Oaks, respectively, and will help shape the local landscape for the March 20 Twinspires.com Louisiana Derby (G2) and Fair Grounds Oaks (G2).

Mandaloun, a 3-year-old son of Into Mischief, was visually impressive winning both starts in Kentucky at 2, though he’s yet to go two turns or run past 7 furlongs. Cox is eagerly looking forward to giving him the chance, and expects even better when it comes.

Divine Comedy, a 3-year-old daughter of Into Mischief, impressed breaking her maiden here going long Dec. 18 after running sixth sprinting on debut at Churchill. While she may not be as accomplished or as heralded at Mandaloun, she’s another in a long line of potential Cox stars.

“Divine Comedy is doing well and came out of her race in good shape,” Cox said. “She had an easy maintenance half, her first work back, and we’re excited to run her.”

Cox also left the door open to run Juddmonte’s homebred Sun Path, a full sister to last year’s Fair Grounds Oaks winner Bonnie South, in the Silverbulletday. The daughter of Munnings is 2-for-3, including a local allowance win the same day Divine Comedy broke her maiden.

Along with his Fair Grounds string, Cox has runners stabled in Hot Springs, Arkansas for his Oaklawn Park division and Palm Meadows in Boynton Beach, Florida for his Gulfstream Park contingent. Fair Grounds Media caught up with him Wednesday morning to look back on a 2020 season that sees him on the short list of Eclipse Award candidates, as well as look towards 2021, where he’s beginning to plot out the paths of his top horses.

“When I started this, I had dreams of winning an Eclipse,” Cox said. “There are three things that I said I would like to do in this industry, and that’s win an Eclipse Award, do enough to earn a trip to the Hall of Fame, and win the Kentucky Derby. And I’ve yet to do any of them. So, I’ve continued to work hard, try to find good horses, place them properly, and manage them right. I’m very fortunate to have great owners, a great staff, and great horses and we’ve had a very good 2020.”

Updates on other big-name runners from Brad Cox’s barn are below:

Godolphin LLC’s homebred Essential Quality, who won the Breeders’ Cup Juvenile, is odds-on to win the Eclipse Award as champion 2-year-old, and is atop many Derby Future Book lists):

“He’s a good colt and his work this weekend (4 furlongs in 48.80 Jan. 3 at Fair Grounds), just ‘wow,’ just phenomenal,” Cox said. “We didn’t give him time off but we backed off on him and he seems to have responded well. He was really good this past weekend and we just need to keep him that way until the middle of February. The Risen Star (G2, Feb. 13 at Fair Grounds) is on the table, as is the Southwest (G3, Feb. 15 at Oaklawn). The one thing about the Fair Grounds race is it’s a lot more points (50-20-10-5), so that makes it a little more attractive. But the distance is the question; do we want to go a mile and an eighth off not having a race in three months? We’ll talk it over with the Godolphin team and make a decision probably about the 1st of February. If he goes to the Southwest, I’m 99% sure that he would go back to Fair Grounds, and the Louisiana Derby would be in play after that.”

“The Bayakoa (G3) on (February) the 15th (at Oaklawn) is the plan right now for her,” Cox said. “She seems to have picked up where she left off last year. Her work this weekend (4 furlongs in 48.80 Jan. 3 at Fair Grounds) was really, really good and I feel like we’re ahead of schedule as far as where we need to be with her. We never took her out of training, so it’s not like she lost a bunch of fitness, but her work was really, really good.”

Clint Gasaway, Lance Gasaway, Madaket Stables LLC, and Wonder Stables’ Wells Bayou, who won the Louisiana Derby in March but hasn’t raced since running fifth in the Arkansas Derby (G1) in May:

“(He’s had 10 workouts since the middle of October) and we have a couple of options, including the Louisiana (G3 at Fair Grounds Jan. 16) and the Fifth Season (Jan. 23) at Oaklawn as well.”

“She’s really good and she’s doing really well right now,” Cox said. “Her work the other day (4 furlongs in :50 Jan. 3 at Fair Grounds) was a little slow but it was more because her workmate broke off a little slow but the rider on her did exactly what he was instructed to do and she’ll pick it up and start going a little quicker and further in the future and right now we are pointing for (Fair Grounds’ Feb. 13) Rachel Alexandra (G2).”

“We’re thinking about the Louisiana but we’re pretty sure we’ll end up going in the Pegasus (G1 at Gulfstream Jan. 23),” Cox said. “I told the owners I could go either way, and they thought maybe we’ll wait one more week and give it a shot there and see how it goes. Then we could maybe look at the Saudi ($20 million G1 Saudi Cup at King Abdulaziz Racecourse Feb. 20) race as well. We’ll get the first one out of the way and then go from there. I don’t think further distances will be an issue for him at all. He’s doing well, he’s a grade 1 race horse, and that work (at Fair Grounds Jan. 2), three quarters in 1:13.00, that’s fantastic and is moving on that race track.”

“She was given some time and there aren’t a lot of options with the 3-year-old fillies on the grass early in the year,” Cox said. “One of our goals is possibly (Royal) Ascot (G1 Coronation in June) and maybe the Churchill race (Tepin Stakes) this summer to start her back.”

“I think his next start will be around one-turn,” Cox said. “I’m not saying we wouldn’t eventually try two turns, but for the time being we’ll keep him around one-turn. I don’t have anything picked out for him right now and I want to give him plenty of time to recover from his first race. Since he’s been at Fair Grounds he’s settled in really well and is moving forward mentally.”

“We’ll try a second-level allowance race with him around two turns at Oaklawn and hopefully he’ll gradually make the progression to stakes company before the winter is over,” Cox said.

“She had a fantastic work (4 furlongs in a bullet 48.00 Jan. 4 at Oaklawn) and we really weren’t expecting her to do as much as she did,” Cox said. “We’re pointing her to the Marth Washington (Jan. 30 at Oaklawn).”

“We’re pointing him to an allowance race (at Fair Grounds) on the 16th (of January) going long,” Cox said. “It will be his introduction to two turns. We think he should handle it but you don’t now until you try.” 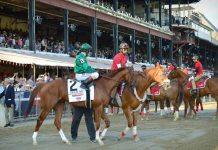 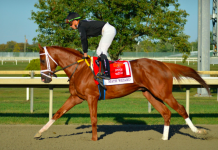