The Cowboys close out their offseason program with three days of mandatory minicamp this Tuesday, Wednesday and Thursday at The Star.

“It just starts to ramp up,” Cowboys running back Ezekiel Elliott said of this portion of the offseason. “(The coaches) start dumping more of the playbook on us. When minicamp starts, we do a lot more unscripted reps. It’ll be a good test for (the younger players), just seeing where they’re at and where they can go by the time we get to training camp.”

Cowboys coach Mike McCarthy’s biggest goal during this portion of the offseason is to get the younger players up to speed so they can hit the ground running when the team arrives in California for training camp the last week of July. The training camp practice time is limited. The veteran players and coaching staff can’t be held up because a rookie doesn’t know his assignment.

“We just have to continue to grow,” Cowboys quarterback Dak Prescott said of minicamp. “We’ve got a lot of young guys. These guys got to continue to pick up the playbook, continue to make strides, make sure they carry that over to training camp. That’s what this is: getting ourselves in the best position to make sure we succeed in training camp and keep going.”

Here are five things I’ll be monitoring most during those three sessions that are open to reporters.

. The Cowboys’ No. 1 tight end did not attend the final week of OTAs, as he’s looking to get a long-term extension from the team. OTAs aren’t mandatory, so Schultz can’t be fined for missing that portion of the offseason program. But the franchise-tagged tight end can be fined if he misses mandatory minicamp. Dallas doesn’t have great depth at the position, so without Schultz, who works with the first team? Sean McKeon, Jeremy Sprinkle and Jake Ferguson are the next three on the depth chart.

Prescott said last week that he has been in contact with Schultz and knew he was going to miss the final week of OTAs. He’s confident everything will work itself out.

“I realize that I’ve gone through the things that I’ve gone through, obviously not just in life but in football as well, to help others,” Prescott said. “Just being able to talk to Dalton, maybe ease his mind through some of this. And just understand that I went through this process and a lot of people go through this process. He’s a guy I feel very comfortable with, I have a lot of trust with. He knows that, the team knows that, so I’m confident in that situation and I’m in his corner.” 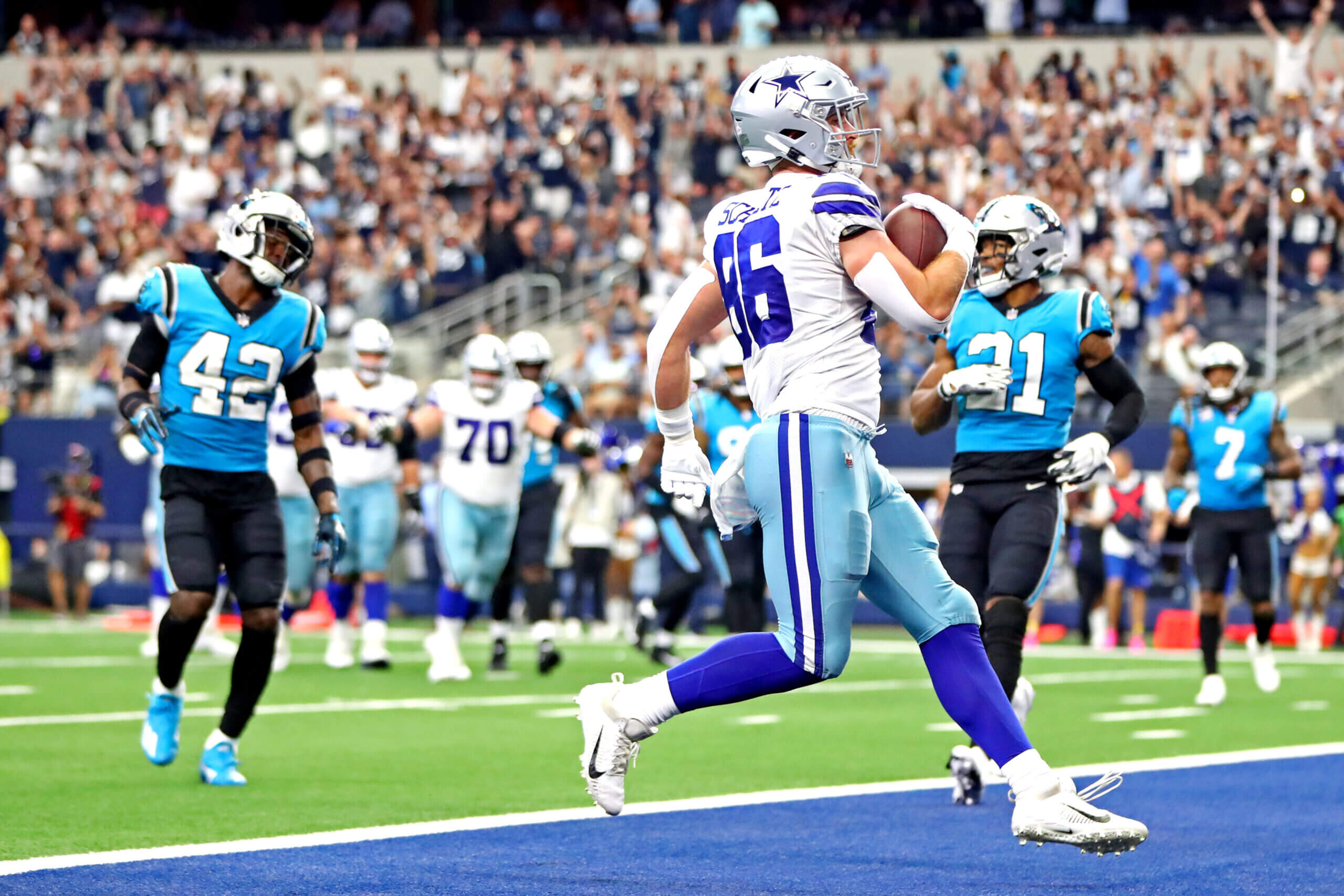 No. 2 wide receiver. With Michael Gallup working his way back from a season-ending knee injury, rookie Jalen Tolbert and veteran James Washington were expected to get significant first-team work alongside No. 1 wide receiver CeeDee Lamb. However, that was never on display during the first two OTA practices open to reporters. was in a walking boot the first week of OTAs. Tolbert spent most of the time watching practice from the sideline or working on the resistance cords. Tolbert is expected to participate in minicamp.

“He’s a smart guy,” Prescott said of Tolbert. “He wants to grow. He wants to get better. He’s always talking to me about film and what I saw and what he can learn. He’s trying to get advanced-level coaching and we’re not even through step three yet. He’s an exciting guy that has a bright future.”

Considering Gallup is likely to miss the start of the season, Tolbert and Washington need all the reps they can get with Prescott. The next two wide receivers on the depth chart behind them are veteran Noah Brown and second-year receiver Simi Fehoko. The expectation is that Lamb, Tolbert and Washington will see the most targets early in the season until Gallup gets back on the field.

Offensive line assignments. How will the first- and second-team units be lining up? This is a big year for Dallas’ offensive line. The group has to be better than last year. First-round pick Tyler Smith will likely start at left guard this season, but he did see some first-team work at left tackle during OTAs. My expectation is the first team will include Tyron Smith at left tackle, Tyler Smith at left guard, Tyler Biadasz at center, Zack Martin at right guard and Terence Steele at right tackle. Behind them, rookie Matt Waletzko has gotten the early nod as the second-team left tackle, with Connor McGovern working at both guard spots and some at center. Matt Farniok will also likely see some second-team work at center. Josh Ball will compete with Waletzko for the swing tackle position and likely be the No. 2 guy at right tackle.

It might seem like a long time between now and the season opener on Sept. 11, but the Cowboys have to get this group figured out so they can have a strong training camp and preseason to build continuity. There was a time not long ago when Dallas went into camp feeling like its offensive line was arguably its greatest strength. Now, it might be the group with the most questions.

Takeaways. Practice can be frustrating at times for Trevon Diggs. He needs Prescott to throw the ball in his direction so he can make plays. But the franchise quarterback is very aware of the NFL’s 2021 interception leader. Diggs said last week that he has picked off Prescott twice this offseason.

Cowboys CB Trevon Diggs on his OTA trash talk with Dak Prescott and how many interceptions Diggs has so far in OTAs pic.twitter.com/cd233h8sr2

The Cowboys had only 17 takeaways in 2019. Since McCarthy has been head coach, Dallas totaled 23 in 2020, tied for seventh-best in the NFL, and a league-high 34 last season (26 interceptions). Even if that number doesn’t increase for a third consecutive year, the Cowboys must remain among the league leaders in this area.

Cornerback Jourdan Lewis and safety Malik Hooker combined for a nice interception in team drills during Week 2 of OTAs. Lewis broke up the pass while Hooker made the grab. How many will there be during the three days of minicamp? Which defenders will be the most active in that area?

. Without wearing full pads and being able to tackle to the ground, it’s difficult to completely evaluate Parsons’ impact in a minicamp setting. Keeping him and other key players healthy is far more important.

But Parsons is still worth watching because defensive coordinator Dan Quinn moves him around so much. And with Parsons’ competitive nature, he seems to find ways to catch your eye. He was great as a rookie, but Dallas needs even more in Year 2.

“There’s a lot more to the second-year jump than just your statistics of how you play on Sundays,” McCarthy said. “It’s what kind of teammate are you? How do you interact in the locker room? Are you making the others better around you?

“That’s all part of culture growth and establishing that. He has an opportunity to really make a huge impact on our football team.”

Cowboys LB Micah Parsons: “We’re just really coming together. I love it. We’re so far ahead of where we were last year.” pic.twitter.com/hk2roLFoc0