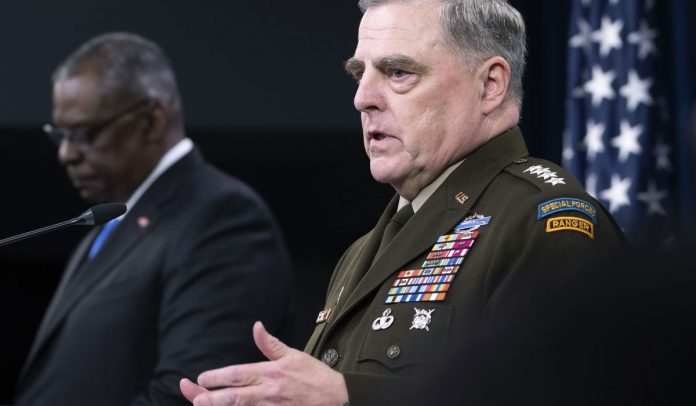 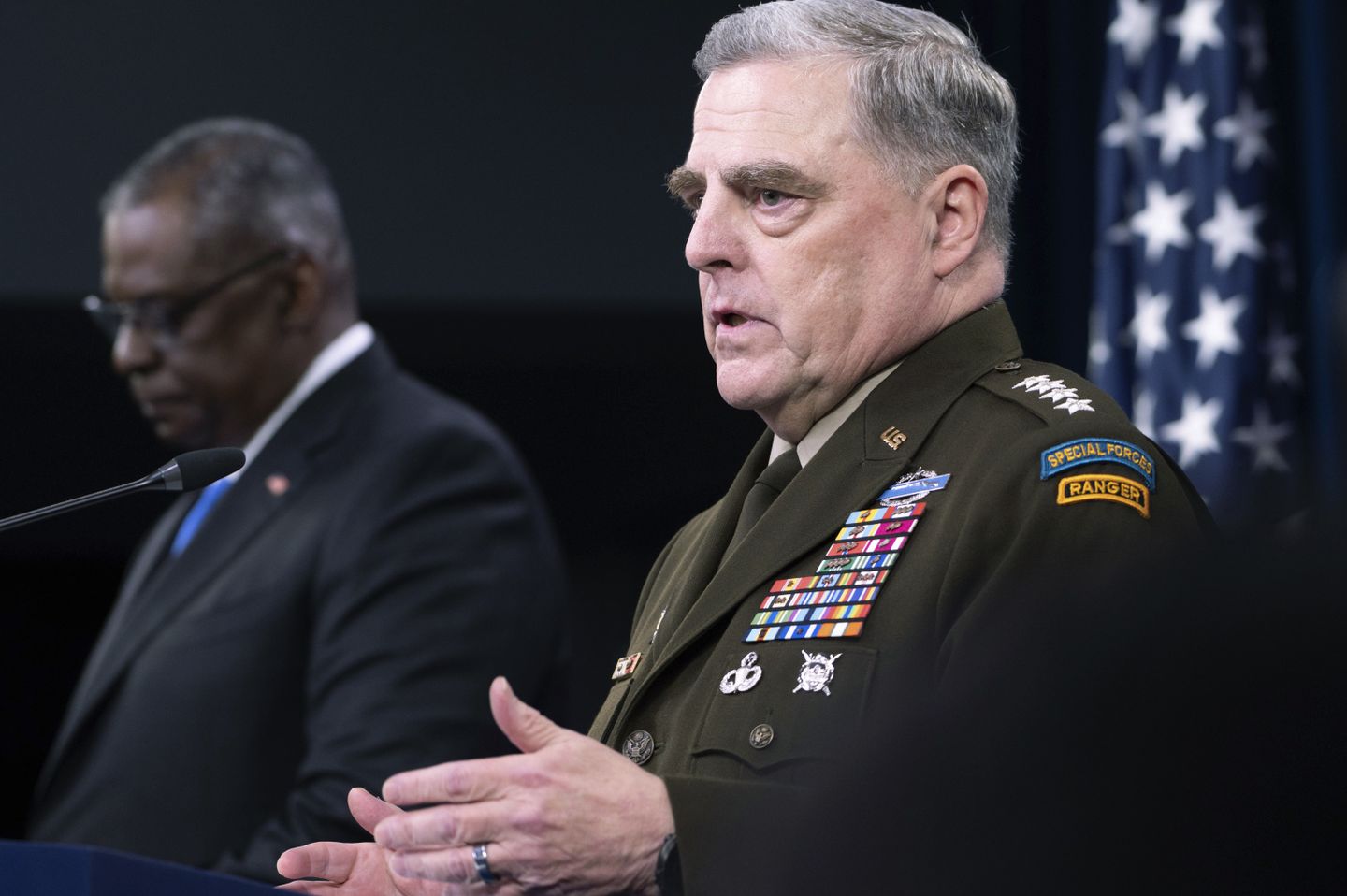 The Pentagon was dragged deeper into the political fray Wednesday as the military’s top uniformed officer faced repeated questions about his view on “White rage” and whether he crafted private plans to stop President Trump from staging a coup to stay in power.

At what was supposed to be a routine Pentagon press conference, Joint Chiefs of Staff Chairman Gen. Mark A. Milley and Defense Secretary Lloyd Austin tried to steer clear of controversial topics and focus instead on U.S. military support for the Afghan government, the secretary’s upcoming trip to Southeast Asia and other matters. But partisan battles and cultural fights over issues such as critical race theory largely consumed the discussion, offering further evidence of what analysts say is a new reality: The Pentagon can’t escape partisan politics, no matter how hard its leaders try.

That evidence was on full display Wednesday as Gen. Milley was pressed about his use of the term “White rage” as a partial motivation for the Jan. 6 riot at the Capitol, where a mob of Trump supporters interrupted the official counting of electoral votes. The tough-talking Army general waded into the issue during congressional testimony last month.

“I want to understand White rage, and I’m White,” he told skeptical Republican lawmakers on June 23. “What is it that caused thousands of people to assault this building and try to overturn the Constitution of the United States?”

Since then, Gen. Milley has faced stiff criticism for seeming to suggest a direct racial connection to the events of Jan. 6. He made the comments against the backdrop of a growing debate in Washington over whether military leadership is lurching to the political left, targeting service members and officers with conservative views and embracing controversial doctrines such as critical race theory. The Pentagon vehemently denies such political leanings.

The career Army general has also been drawn into a nasty war of words with his former commander in chief. Mr. Trump has harshly denied claims in a new book that Gen. Milley resisted efforts to enlist the military in controlling violent domestic racial protests a year ago and that the general feared Mr. Trump was considering a coup after the November election.

Gen. Milley “choked like a dog” in the face of liberal media criticism last year and is now pretending to be “woke” about social issues, Mr. Trump said in a July 15 statement.

“The way I look at Milley,” Mr. Trump said, “he’s just a better politician than a general, trying to curry favor with the Radical Left and the absolute crazy people espousing a philosophy which will destroy our country!”

Reportedly deeply disconcerted by the military’s prominent role in the political battles of the past year, Gen. Milley ducked the opportunity Wednesday to explain exactly what he meant.

“I’m not going to address White rage or Black rage or Asian rage or Irish rage or English rage or any other rage,” a visibly uncomfortable Gen. Milley said. “The events of the 6th of January happened. Those are all going to be sorted out.

Pressed about the term “White rage,” Gen. Milley said he would address the issue more fully at a later date.

“I think it’s a very complicated topic, and we don’t have the time to go into the nuances right this minute. I can do that later,” he said. “Right now is not a good time to do that. It’s too complicated.”

Mr. Austin also fired back at charges that the Pentagon is embracing critical race theory, the primary battlefield in the current culture wars between left and right. He said isolated incidents of instructors at some military institutions teaching aspects of critical race thinking do not equal an endorsement of the theory, which puts racism at the center of American history dating back to the arrival of Europeans in the New World.

“Critical race theory is not something [the Defense Department] teaches, professes, embraces,” he said. “You’ve also heard a couple of people at academic institutions say they have required this to be reading for their students in specific courses. But because that’s the case does not mean this department embraces this theory.”

Critics say Mr. Austin’s anti-extremism initiative defines an “extremist” so broadly that it could inadvertently target devout Catholics and conservatives in the armed forces. The Defense Department also denies that charge.

Mr. Austin and Gen. Milley stood firmly behind the long-held standard that the military must remain apolitical, but some observers say Pentagon leaders instead must accept that they are players in a political environment and try to be nonpartisan.

“The military can’t avoid politics. The use of military force, or even maintaining military forces, are political issues. But the U.S. military can and must strive to be nonpartisan,” said Gil Barndollar, a senior fellow at the Defense Priorities think tank and the Catholic University of America’s Center for the Study of Statesmanship. “This is increasingly hard in a time where it seems like every single issue is nationalized and then politicized. Military recruitment, training and even reading lists have become fodder for partisan battles in just the past couple of months.”

Indeed, some high-profile conservatives say recent Army recruiting commercials portray weakness and focus too much on diversity and inclusion at the expense of lethality and toughness.

Gen. Milley has rejected those criticisms outright, especially accusations that the military has become soft as its leadership drifts to the political left.

But the Joint Chiefs chairman is also perhaps the best example of the Pentagon’s unsuccessful effort to stay out of the political realm. Gen. Milley came under intense fire last summer for wearing his battle uniform when walking alongside then-President Trump in Lafayette Square as a large crowd protested against police brutality and racial injustice.

Gen. Milley later apologized for his appearance there and said it gave the impression of a political military.

Just a few months later, Gen. Milley and other high-ranking officers developed plans behind the scenes to keep Mr. Trump from staging a military coup to stay in power past Jan. 20, according to a new book written by a pair of Washington Post reporters.

Gen. Milley ducked questions about the specific charges made in the book but stressed that he and other officers never conspired to circumvent the commander in chief’s control over the military.

“We take an oath. … Not one time did we violate that,” he said. “And we also maintained the tradition of civilian control of the military. We did that without fail.”

Mr. Austin also vouched for Gen. Milley on that point.

“I’m not guessing at his character. He doesn’t have a political bone in his body,” the secretary said.

Disproportionate targeting of Jamaicans for deportation from UK, data suggests 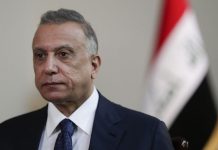 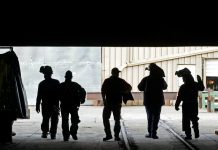 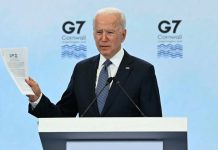 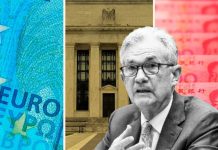