Hove pigeons heave to. A sudden move and up they go, an applause of them, airborne. They lift above the kiosk roof, above the dog and the sign that says No Dogs, above parked cars, trees and lawns down to the sea startled by its own light.

How many times a day do the pigeons do this? Disguised in their pigeon-ness, cooing, pecking at invisible stuff, they’re only waiting for a clap to make the thunder. How do they decide who goes first? This one, that one, all.

The sudden reclamation of their ancestral rock-dovery rises before Regency-windowed cliffs of the seafront – savage little shadows in a polite breeze. Caught in the act, at shutter speed, their grey-on-blue silhouettes are like joyfully cast underwear. What is it to be wound so tight that the slightest quiver scares you into the sky?

Danger wears feathers, too. Death flies a falcon, drives a van, monitors through the beady eyes of gulls, who stand aloof on chimney pots in winter quiet. A couple of jays (Leonard and Kenneth, apparently) in their pieds, pinks and blues, attend to street elms. People, lifted by class A sunshine, keep their little familiars on leads.

What is it to see as a pigeon sees? Unlike the three-cone types of our retinas, pigeons have four – red, green, blue and ultraviolet; some cones contain coloured oil droplets allowing them to see even more colours than we can. What is it to feign panic but never touch, only smack wings together above and below the body on takeoff; clapping the moment, not the cause of the moment; clapping not being dead but deft. To speed through lanes of air, around buildings and trees, more dance than flight.

To map which way is up and down, north and south, prospect and refuge, home. To have all that data spooling around the mind as feathers fly in and out of jeopardy. To wear a memory, coded in the iridescence around their necks, of a lost world of wild coasts hidden under the pavement, never found because every time they search for it, there’s a sudden move and they’re airborne again. 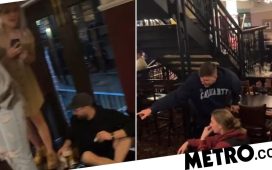 Professional 'guilds' of bacteria gave rise to the modern microbiome

US firm to build biggest ever vats for ‘no cruelty’ meat 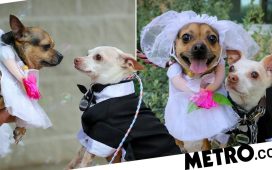 Inseparable shelter chihuahuas get married in an adorable ceremony 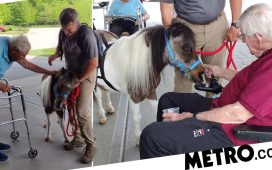 ‘It looks beautiful’: UK gardeners on leaving lawns uncut for No Mow May