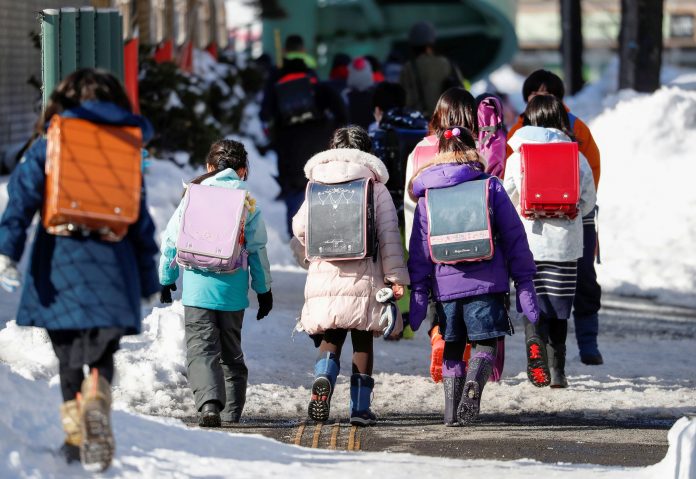 People are wearing masks at Myeongdong on February 20, 2020 in Seoul, South Korea.

All times below are in Eastern time.

Stocks fell sharply again as investors worried the coronavirus may be spreading in the U.S. A slew of corporate and analyst warnings also dragged down the major averages.The Dow Jones Industrial Average plummeted 529 points, or 2%. The S&P 500 slid 2.1% while the Nasdaq Composite dropped 2.4%. Those losses put the Dow in correction territory, down 10% from its from its record close to where it’s trading at now. The S&P 500 was in correction territory on an intraday basis. — Imbert

9:31 am: WHO says failure to prepare for an outbreak ‘could be a fatal mistake’

World Health Organization officials warned that member countries need to prepare for their first COVID-19 cases after seven new countries reported cases for the first time over the last 24 hours. “Every country must be ready for its first case,” Tedros Adhanom Ghebreyesus, director-general of WHO, said during a press briefing at the agency’s headquarters in Geneva on Thursday. “No country should assume it won’t get cases. That could be a fatal mistake. This virus does not respect borders.” Tedros said that world health officials’ greatest concerns right now are with what’s happening in the rest of the world, not in China, where cases have slowed in recent days. Brazil, Georgia, Greece, North Macedonia, Norway, Pakistan and Romania reported coronavirus cases over the last day, Tedros said. —Lovelace

9:11 am: PayPal warns coronavirus will have a negative impact on Q1 revenue

PayPal said the outbreak could have a negative impact on its revenue expectations, and warned that revenue for the first quarter of this year would be toward the lower end of the guidance it gave when it reported earnings in January. “We currently estimate the negative impact from COVID-19 to be an approximate one percentage point reduction, on both a spot and foreign currency-neutral basis, to PayPal’s year-over-year revenue growth for the first quarter, as compared to the revenue guidance provided on January 29, 2020,” the company said in a press release. —Bursztynsky

8:50 am: WHO officials hold press conference on the outbreak

World Health Organization officials are holding a press conference to update the public on the outbreak. WHO officials declared the COVID-19 a global health emergency last month, while urging the public against over-reacting to the virus. In the past week, the virus has spread substantially beyond China and is now circulating in at least 37 countries across the world. As the virus spreads, WHO Director-General Tedros Adhanom Ghebreyesus is calling the international community to action before it’s too late. “The window of opportunity is still there, but our window of opportunity is narrowing,” he said last week. “We need to act quickly before it closes completely.” Watch the live 8:45 a.m. press conference here. —Feuer

The world needs to invest billions of dollars in medical research to find effective treatment for the coronavirus, former Food and Drug Administration Commissioner Scott Gottlieb told CNBC. “We have to prepare that this is not something that’s going to start and stop,” he said. “This could become something that we have to live with and what’s going to inevitably be a backstop against it’s going to be a therapeutic or a vaccine. We need to invest very heavily in that right now.” —Feuer

Disclosure: Scott Gottlieb is a CNBC contributor and is a member of the boards of Pfizer and biotech company Illumina.

7:30 am: Chinese government releases new data about the economic impact

7:20 am: Dow is set to drop on report of first US case of unknown origin

7:10 am: CDC confirms first possible community transmission in the US

People wear surgical masks while shopping at a grocery store in Cupertino, California, United States on January 23, 2020 before the start of Lunar New Year. There are now 8,235 confirmed cases of coronavirus, with 171 death and 143 recovered.

U.S. health officials late Wednesday confirmed the first possible community transmission of the coronavirus in America, a troubling sign that the virus could be spreading in local cities and towns. The Centers for Disease Control and Prevention doesn’t know exactly how the California patient contracted the virus. The individual is a resident of Solano County and is receiving medical care in Sacramento County. The patient didn’t have a relevant travel history or exposure to another patient with the virus, the CDC said. “At this time, the patient’s exposure is unknown,” it said. “It’s possible this could be an instance of community spread of COVID-19, which would be the first time this has happened in the United States.” —Lovelace

“International organizations are worried about the negative impact of the [virus] to the global economy,” Liu Guoqiang, a vice governor of the People’s Bank of China, said Thursday, according to a CNBC translation of his Mandarin-language remarks. “I’m also very worried,” he said, “and this worry has become a reality.” Liu noted how China, the world’s second-largest economy, is one of the few countries in the world that has not resorted to “unconventional monetary policy.” As a result, he said, “China has relatively larger space for policy action, and has the ability to cope with various challenges, something which should be cherished and maintained.” He noted how domestic interest rates, as guided by the loan prime rate, have room to fall further. —Cheng

6:25 am: Japan’s Abe to ask schools to close from March 2 through to spring break

Japanese Prime Minister Shinzo Abe said Thursday the government will ask all elementary, junior high and high schools to close from March 2 through to spring break. Abe’s comments, according to Reuters, came at a meeting of the government’s task force as part of efforts to contain the coronavirus outbreak. Spring break in Japan typically ends around late March. —Meredith

Iran’s health ministry has confirmed 106 additional cases of the coronavirus in the last 24 hours, bringing the total number of infections there to 245. Iran’s death toll as a result of the COVID-19 outbreak has also been raised to 26, Kianoush Jahanpour, a spokesperson for the Islamic Republic’s health ministry, said Thursday. Iran is at the epicenter of the outbreak in the Middle East, having recorded the highest number of coronavirus fatalities outside China. Health authorities from Afghanistan, Bahrain, Iraq, Kuwait, Oman, and the United Arab Emirates have all reported cases of the coronavirus that stemmed from Iran. Earlier on Thursday, Saudi Arabia announced it would temporarily suspend the entry of foreigners for pilgrimage and tourism purposes. —Meredith

A South Korean health worker sprays disinfectant as part of preventive measures against the spread of the COVID-19 coronavirus, at a residential area near the Daegu branch of the Shincheonji Church of Jesus in Daegu on February 27, 2020.

South Korea confirmed 505 new cases of the coronavirus on Thursday, Yonhap news agency reported, bringing the total number of infections nationwide to 1,766. It marks the sharpest daily spike yet in South Korea, outnumbering the 433 new cases in China. Most of the country’s new infections stemmed from the city of Daegu, Yonhap reported, citing the Korea Centers for Disease Control and Prevention. Health authorities began testing more than 210,000 members of a religious sect at the center of South Korea’s epidemic for coronavirus on Thursday. —Meredith 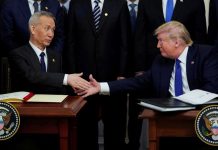