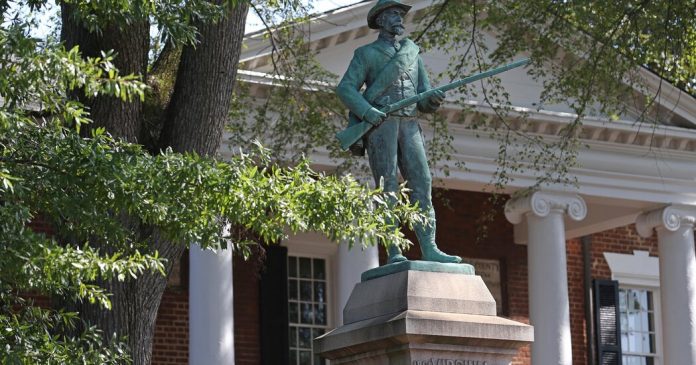 With yellow bands and rope wrapped around its legs, waist and ankles, a Confederate statue in Charlottesville, Va., the site of a violent white supremacist rally in 2017, was removed on Saturday morning from its pedestal at the Albemarle County courthouse after 111 years.

The removal of the monument, “At Ready,” which depicts a Confederate soldier holding a rifle in his hands, along with two cannons and several cannonballs on either side of it, was live-streamed on the Albemarle County’s official Facebook account.

At the start of the removal process at 6:30 a.m., Ned Gallaway, chairman of the county board of supervisors, read a brief history of how the statue was erected in 1909 using taxpayer money and how supervisors voted last month to remove it.

The county will pay the $63,700 to remove the statue and other items, Emily Kilroy, a county spokeswoman, said on Saturday. The statue itself weighs 900 pounds, Ms. Kilroy said, and the cannons each weigh 2,800 pounds. The stack of cannonballs weighs 400 pounds.

Albemarle County said it was one of the first in Virginia to take action under a Virginia law that authorizes localities to remove, relocate, contextualize or cover “any monument or memorial for war veterans on the locality’s public property.”

During the statue’s removal on Saturday, Mr. Gallaway said, “As our predecessors did, we, too, with purposeful intentions choose to create a new point in our county’s history and choose to redefine this place of significance to represent the values of all members of our community.”

As a crew of at least eight people, all wearing masks and hard hats, worked to prepare the statue for removal, a crowd behind a nearby barrier gathered and played music. When the statue was lifted from its pedestal by a crane and lowered to the ground, the crowd erupted with applause and cheers.

On Tuesday, the board of supervisors voted to send the Confederate monument — including the statue, cannons and cannonballs — to the Shenandoah Valley Battlefields Foundation. The foundation provided the transportation for the pieces to their new destination, Ms. Kilroy said.

“I can’t imagine us figuring out a better place closer by for it to go,” Liz A. Palmer, a board supervisor, said during the vote. She said the county faced many challenges and that it was best to “move on” and get it done.

Although the crowd appeared largely peaceful on Saturday, the area in Charlottesville was the site of the “Unite the Right” rally of white nationalists in 2017 that turned into a brawl, killing one and injuring dozens.

“At Ready” was not the center of the rally three years ago; it was a statue of Robert E. Lee on horseback, just blocks away.

The white nationalists were in Charlottesville to protest the city’s plan to remove that statue, and counterdemonstrators were there to oppose them. That statue has been in the city since 1924.

The fate of the Lee statue as well as a monument to the Confederate general Stonewall Jackson is unknown. In 2017, the City Council in Charlottesville voted to remove them but last year a judge blocked their removal. What will happen to them may be decided by the Virginia Supreme Court.

Civil War statues have been the subject of much debate in recent years and became the target of protests against racism and police violence across the nation after the death of George Floyd, a Black man, in May.

This summer, Confederate monuments in Richmond, Va., were covered with graffiti as were memorials in Birmingham, Ala., North Carolina and South Carolina. 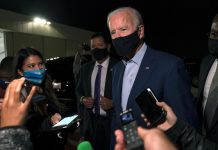 Joe Biden: Amy Coney Barrett is a threat to Obamacare 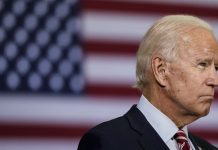 Biden Responds To Trump Court Pick: 'Health Care Is On The Ballot' 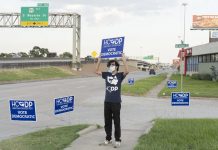 Texas: Does Biden actually have a shot at winning? The answer is a tossup.

Trump has nominated Barrett to the supreme court – what happens next? 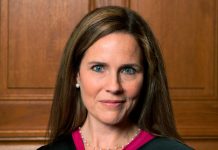 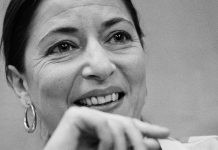 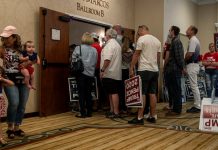 Arizona: A Donald Trump Jr. event is full of people and conspiracy theories.