A Clydesdale horse has had a lucky escape after falling five metres down a well in Donald, Victoria.

Six-year-old Soxz was found at the bottom of the well after he unsuspectingly walked on to the wooden sleepers used to cover the well.

Cathryn Stephens, Soxz’s owner, told Guardian Australia she heard a loud splash and, upon investigating, found the horse partly submerged in a considerable amount of water.

“The first thing I thought of doing was grabbing one of my ropes and wrapping it around his neck to support him, because the well was fairly deep and full of water, and I knew by the time everyone arrived he’d be getting tired,” she said.

The RSPCA, with the help of Donald CFA, the CFA’s Oscar-1 emergency response team and a local vet, worked to drain the water and safely extract the horse using a harness and crane.

RSPCA Victoria inspector Jeremy Dean, who was on the scene to help rescue the horse, said it took a pretty rough fall.

“They pumped a fair bit of the water out of the well pretty quickly, and I’d say that saved his life since he was struggling to keep his head above the water,” he told Guardian Australia.

Dean said Soxz was sedated to ensure he stayed calm and for the safety of the teams on the scene.

“It’s obviously a fairly traumatic thing to happen, and then to be hoisted up in the air isn’t a normal thing to happen to a horse, so it just keeps him calm.”

Soxz escaped with minor injuries and received a full check-up later on Tuesday evening to ensure there were no internal injuries or fractures.

“No broken bones or anything, he’s just a little bit sore and sorry for himself for a little while, but he’ll recover really well, and my vet will be keeping a close on him with me,” Stephens said.

It was a relatively smooth process once the water was drained out, Stephens said, adding she was very appreciative of the help Soxz received.

“It all just went so well and so smoothly, and I appreciate everyone who came to help him.”

Dean said: “The teams who attended were all volunteers, and they did a fantastic job in saving Soxzs life.” 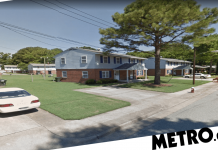 Surprised researchers: Number of leopards in northern China on the rise

Shifts in flowering phases of plants due to reduced insect density

‘We do not get a chance at happiness’: the Bangladeshi fishermen caught by debt

Country diary: into the woods and out of the ordinary

The lynx effect: Iberian cat claws its way back from brink of extinction

John Gray: 'What can we learn from cats? Don't live in an imagined future'