The Estate of Gustav Schickedanz and Donald Howard’s City Boy made the jump to graded stakes company a successful one on Saturday, gamely hanging on to win the G2 Nearctic Stakes by a head at odds of 24-1. The 5-year-old City Zip gelding, ridden by Jesse Campbell for trainer Michael Keogh, ran six furlongs over Woodbine’s yielding turf course in 1:08.18.

The start of the Nearctic was delayed when Lookin to Strike acted up in the gate, causing the field to be unloaded. The horse was evaluated by the vet, after which the nine-horse field was reloaded and Lookin to Strike held back to load last into the second stall.

Following the issues behind the gate, the field broke well with Yorkton quickest of all on the far outside. He strode out to a 2 1/2 length lead through a first quarter in 22.54 seconds, and made his advantage nearly three lengths through a half-mile in 45.13.

Richiesinthehouse held second with City Boy on the outside in third, while Reconfigure held a spot just behind those.

Rounding the far turn it looked as though Yorkton would steal away, but he was caught by Richiesinthehouse at the three-sixteenths pole. City Boy was moving well, as was Reconfigure, and it became a three-way battle to the line in the final eighth of a mile. City Boy held on gamely to hit the wire a head in front of Reconfigure, and Richiesinthehouse was just a neck back in third. The 2-1 favorite Blind Ambition, closing from the rear of the field, got up to finish fourth.

Bred in Ontario by Gustav Schickedanz, City Boy is out of the stakes-winning Bold Ruckus mare Princess Ruckus. He broke his maiden in his second career start, then tried stakes company in his fourth start only to finish seventh. Held in allowance company for the next two years, City Boy consistently hit the board and gave Keogh the confidence to enter him in the Nearctic. Though he hadn’t won a race since August of 2017, City Boy added the Nearctic to his resume with a game performance. Overall, the gelding’s record stands at 3-6-2 from 16 starts for earnings of over $300,000. 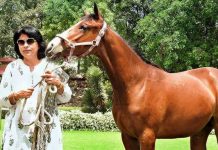 View From The Eighth Pole: It’s Time To Get Rid Of Clenbuterol