COVID-19 has not been kind to junior hockey recently.

Less than one month after the virus forced the cancelation of the 2022 World Junior Championship in late December, the Canadian Hockey League announced that the 2022 Top Prospects Game has been postponed due to the “ongoing challenges of the pandemic”, disrupting yet another marquee event on the junior hockey calendar.

The game, which was set to take place on Feb. 2 in Kitchener, Ontario, is expected to be rescheduled for a later date in 2022. That date has yet to be determined.

The Kubota Top Prospects Game is the premier event for the top draft-eligible talent in junior hockey, with a host of NHL GMs and scouts from all 32 teams regularly attending in order to get a glimpse at the players who could, in the coming months, become pillars of their franchise’s future success.

Typically held roughly one month after the World Juniors, the Top Prospects Game is regarded as the last best opportunity for prospects to improve their individual draft stock before the end of their respective leagues’ season, offering the unique environment to display their talents alongside their high-end peers all while prospective future employers watch from above.

While it’s encouraging to learn that the event will not be canceled and instead will hopefully be rescheduled at a later date, this news offers yet another stark reminder of the ongoing impact the COVID-19 pandemic has on our normal lives.

What Will the Red Wings do at the NHL Trade Deadline?

Weekly NHL Roundup (Jan. 22 Edition): Who You Need to Know

Sam Montembeault's Play Has Been a Positive for the Canadiens Hockey Hall of Famer Clark Gillies Passes Away at 67

Marc-Andre Fleury Could be the Blackhawks' Best Trade Chip 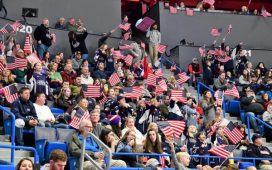