INDIANAPOLIS — This is no mere play on his name. Chase Young wants NFL teams to pursue him.

The Ohio State pass-rushing dynamo is going to unprecedented lengths at the combine to ensure that happens.

Though the D.C. area kid joined his fellow 2020 draft prospects at the combine, Young will skip working out. No 40-yard sprint. No vertical leap. No bench press. Nothing on the field. Frequently rated the top player in this class and projected no less than the second overall selection in April’s draft comes with leverage. The hometown Washington Redskins hold the No. 2 pick.

According to data from the research website Pro Football Reference, every non-QB selected among the top five selections…

[NFL: Washington Redskins] – Adrian Peterson Wants To Be A Competitor, Mentor For His Young Teammates 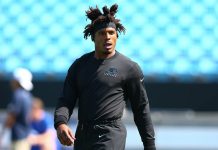