As a teenager in Paris all I wanted was travel, freedom and independence. I started working [in modelling] right after my high school exam and didn’t go to university because I wanted to be an adult. I was a bit of a rebel. For me, growing up was about discovering where the boundaries were and breaking them. Like the “terrible twos”, but in adolescence.

The Clash were one of my biggest crushes. When you’re a teenager you have nothing to do besides school so you have so much time to listen to music and discover things. I had been into French and Italian songwriting and folk, very sweet songs. Then all of a sudden I heard the Clash in my brother’s bedroom. It was a shock, because I’d been a bit of a hippy, and the Clash were punk, not hippy at all, but I loved everything about them. There was something very strong and working class in their music, and so many cool songs. I sang the songs from the London Calling album over and over. I must have sung Train in Vain seven billion times. No exaggeration! They are a legendary band, but can’t reform without [the late] Joe Strummer, like Queen did without Freddie Mercury.

The Portrait of a Lady, by Henry James

Being a teenager is great because you get tattooed by the stuff that you come across. Your soul is not stable like when you are an adult, so this book got really deeply into me. It was one of the first high-level pieces of literature that I read without it being something we did for school. It’s about a young woman trying to break free and discover her identity, but in the 19th century – at that time for women it was like they were in jail. James was such a great writer and had such a talent for descriptions of everything from the Tuscany countryside to her soul. They made a film out of it but even though Nicole Kidman is a great actress and perfect for that role, it’s always tricky to see a film of a book when the book is so set in your own imagination. I read it again and again. It was a very strong coup de foudre for me.

One Hundred Years of Solitude, by Gabriel García Márquez

I discovered this Gabriel García Márquez book in the summer when I was between 15 and 16. My parents were avid readers, so our houses were full of books. In our summer house, which was quite a big house, there were books everywhere, even in the bathroom. Teenagers then read much more than they do now because there was much less choice in what to do. There was no internet, for example, so we had these long summer days to fill our heads with books.

One Hundred Years of Solitude is like a saga. Do you say that in English, a saga? It’s the description of a whole era or society, from the beginning. It’s the story of a family, really. I’m surprised no one has made it into a film. Just as in Russian novels, a lot of the characters have the same name, so it gets very confusing and complicated. Actually, maybe that’s why it hasn’t become a film.

The island of Formentera

When I was 15 years old I went to Formentera on holiday with friends to a friend’s grandmother’s house. The grandmother wasn’t there, but we told our parents that she was. Formentera in the early 80s was a Balearic island with a strong Spanish identity, but the hippy community had colonised it and kept it unspoiled. We had that sensation of arriving somewhere that was almost completely untouched by humanity, and suddenly there was this group of teenagers roaming free. There was music, dancing, guitars, partying all night … Part of the island was a naturist zone. We didn’t go there much, but the people there didn’t wear any clothes. Your teenage years are full of romance and falling in love but they are also a period where there is a sort of shyness. It’s not an age where you want to go naked in front of people. So for us to go for lunch somewhere where the people who serve you are naked was such a funny thing, but we couldn’t get naked ourselves. No way! We wore swimsuits.

On my new album there’s a very famous Spanish song, which I covered purely for pleasure. Porque Te Vas, which translates as Because You Are Leaving, was originally sung by Jeanette (the British-born singer Janette Anne Dimech), and comes from a Carlos Saura film called Cría Cuervos, which fascinated me as a teenager. It came out in the cinema in 1976, when I was nine or something, but I saw it on television as a teenager with friends. I completely fell in love with the film and the song, which I bought on a 45. The film is about loss and death and the song is a broken love song. She sings about how the sun is shining even though her heart is sad. There’s something about it that’s really sweet and fragile. It’s one of those songs that gets stuck in your head, even if you don’t like it. I listened to it so much that my family would be like: “Please, stop playing Porque Te Vas! We’ve heard it over and over and we’re going to die!” But as a teenager you’re completely addicted and unable to moderate yourself.

When I was 16 my brother took me to a big art exhibition in Paris, where I discovered Francis Bacon. When you see someone’s paintings it’s completely different to seeing a picture in a book, so I was completely surprised by his, well, genius. He could paint despair, depression, madness and confusion. It’s all there. When you stand right in front of his paintings, there’s something about the difficulties of being a human being. You can feel the pain he had; his paintings show our confusion and our desire and our madness – I love that. The faces in his paintings shriek away. Amazing.

And it totally resonated with being teenage – we’re confused; we don’t yet know who we are. The paintings say that there’s something uncertain about us as human beings and that comes over in a very dramatic way. This all hit me at the point just before I started to find myself. Although, to tell you the complete truth, I’m not so sure I know who I am now. I mean, I hope we never entirely know who we are. That would be boring, right?

• Carla Bruni’s new, eponymous album is out now on Universal/Wrasse 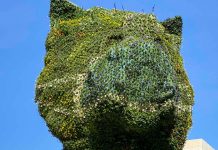 Woof! Jeff Koons’s Puppy at the Guggenheim Museum Bilbao gets its own flowery face mask

Wear the art—charity t-shirt pieces by Wolfgang Tillmans, Linder and Sunil Gupta go on sale for £30

Edwardian homes for sale – in pictures 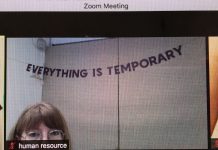 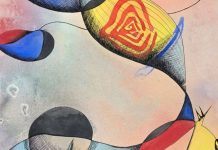 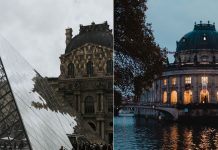 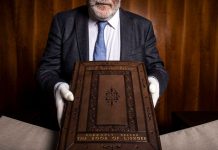 Historic Book of Lismore returns to Ireland from Britain 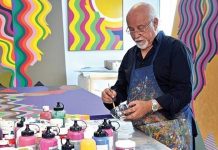 'King of colour': tributes paid to Moroccan artist Mohamed Melehi who has died of Covid-19, aged 84