Colic, a broad term that encompasses all forms of abdominal pain, is the No. 1 killer of horses. Mild cases can often be resolved with simple medical care, but some colic cases require surgical intervention to restore the horse to health. Horses that undergo colic surgery face additional risks, including anesthesia, the surgical procedure itself and the recovery time needed to get the horse back to the state of health he was in before the surgery.

The scientists discovered that 59 percent of horses that had colic surgery at the college went home alive; 96 percent of those horses were alive one year later. However, more than half of the horses had one or two colic episodes in that year.

Nearly two-thirds of the horses regained their pre-colic surgery level of performance, but 46.2 percent of owners reported that the horses had gait-related issues or behaved differently than before they had the surgery.

The researchers suggest that improving the quality of care the horse received after surgery could drastically improve the horse’s athletic performance and welfare. They also suggest collaboration with saddle fitters, physiotherapists and others who can work in together to return the horse to physical and mental health. 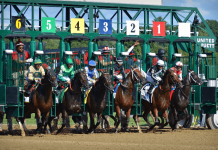 The Lineup: Jim Dandy At The Spa, Bing Crosby At Del Mar

Weekend Lineup Presented By NYRA Bets: Grade 1 Sprinters To Line Up On Both Coasts 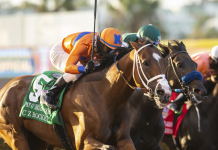