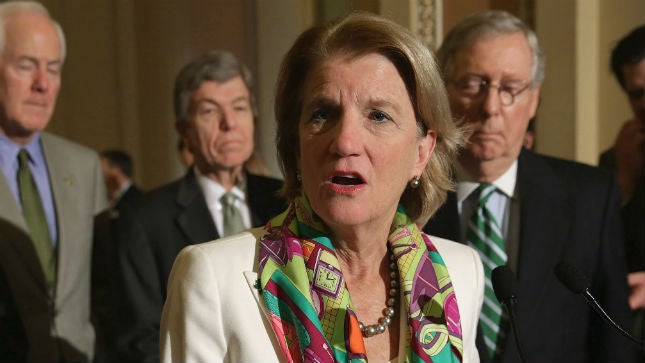 Shelley Wellons Moore CapitoThe Hill’s Morning Report – Presented by TikTok – Dems rest their case; verdict on Trump this weekend Senators show signs of fatigue on third day of Trump trial GOP senators say trial could wrap as soon as Saturday MORE (R-W.V.) in a letter to the White House Wednesday said the Biden administration has frozen a “significant” action on Per- and Polyfluorinated Substances (PFAS) drinking water standards with a recent executive order and asked the administration to “promptly” publish the rule in question.

In the letter to White House Chief of Staff Ron Klain

“I have long taken a lead role in bipartisan efforts to address PFAS, and of significant importance to me is the timely action of [the Environmental Protection Agency] to promulgate a National Primary Drinking Water Regulation under the Safe Drinking Water Act,” Capito, the ranking member of the Senate Environment and Public Works Committee, wrote in the letter Wednesday.

The letter notes that the EPA finalized a determination to regulate two PFAS substances, peerfluorooctanesulfonic acid (PFOS) and perfluorooctanoic acid (PFOA) under the Safe Drinking Water Act on Jan. 15.

“This final regulatory determination was a vital step toward ensuring the protection of public health across the nation, as well as to my constituents specifically. It still has not been published in the Federal Register,” Capito wrote.

The West Virginia senator is a vocal advocate for the introduction of a maximum contaminant level (MCL) for PFAS in drinking water. In the Feb. 3 confirmation hearing for Michael Regan

Kirsten GillibrandThe Memo: Punish Trump or risk a repeat, warn Democrats Senators show signs of fatigue on third day of Trump trial LIVE COVERAGE: Democrats conclude case against Trump MORE (D-N.Y.) did the same, saying she was “like-minded with her in terms of the restlessness of getting there and the delay” in implementing a PFAS drinking water standard.

“I would impress upon you how important I think that is to our nation and to our nation’s [youth], as they are living through the impacts of what this could have on drinking water,” she said. “So I would just ask a pledge to keep working with me and us on that.”

EPA Press Secretary Nick Conger confirmed to The Hill that the rule is currently under review.

“EPA is following the science and the law in accordance with the Biden-Harris Administration’s executive orders and other directives in considering our next steps to address PFAS and to protect public health and the environment,” Conger said in a statement. “EPA is committed to addressing this complex public health challenge.”